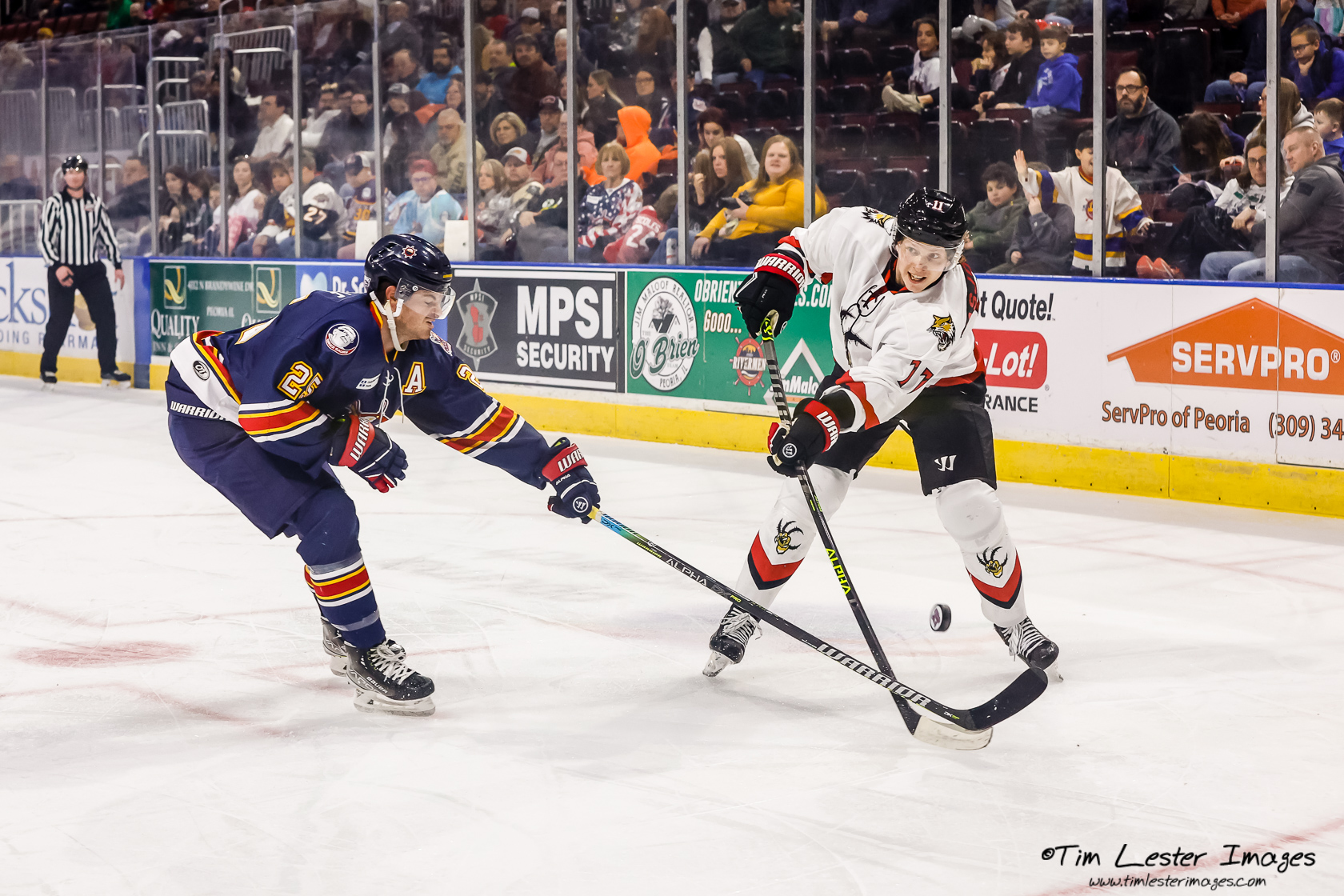 #SPHLPHOTOS | The @vcbobcats travelled to Peoria on Sunday afternoon in a contest against the @Peoria_Rivermen.
FPH Photographer Tim Lester was there for all the action!

PEORIA, Ill – The Vermilion County Bobcats traveled away from their home ice for the 3rd time in 2023 to the Peoria Civic Center on Sunday afternoon in a contest against the Peoria Rivermen. The Bobcats arrived in Peoria with a desire to right their ship, dropping the previous four games, with their last win being in the Peoria Civic Center on Jan.6, and looking to rebound from a 9-1 home loss at the hands of the Quad City Storm the previous night. In the end, the visitors remained tied for last place in the SPHL standings, and the home crowd of 2,950  were happy to witness a 5-2 win by the home team.

The Peoria fans showed reason to worry early as the home team’s play was not up to their Rivermen standards; just past the 6-minute mark, Vermilion County forward Vadim Vasjonkin scored on his first shot of the game while alone in the slot; this was his 12th point in 17 games this season. The Rivermen ultimately head to the locker room after the first period trailing in shots on net and the scoreboard. The Bobcats were happy to celebrate first in the 2nd period when Davis Kirkendall got his 7th goal on the season near the 5-minute mark. One of the many transactions by the Rivermen in 2023, they welcomed back Alexandre Carrier to Peoria, last seen wearing a Peoria sweater in the 2014-2015 season before heading to the American Hockey League but spending the majority of his time away in the ECHL. A short 21 seconds after the second goal by the visitors, Carrier skated around to the high slot throwing a shot toward the net but was able to get the back puck and have basically an open net goal as Bobcats goalie Brett Epp had not moved much after the initial shot attempt. While the goal would be a highlight for Carrier, his subsequent two actions would not be ideal. First, near the eight-minute mark, he was assessed a 5-minute major for boarding; the Bobcats could not capitalize on the extended power play. Within three minutes of exiting the box, he was given another penalty for high sticking, the Peoria penalty kill group preventing another goal. These would be the only two opportunities the visitors would have on the power play. The Rivermen were able to tie the game when Austin Wisely earned his second goal of the year while screening the opposing goalie on the crease edge and pounding the puck past Epp after a shot. With a little momentum starting, the home squad got another goal a short 16 seconds later when Marcel Godbout fired a shot from the high slot, helped by a screen in front of the net.

The Rivermen nearly doubled the shots on goal by the Bobcats during the second period but really turned up the defense in the third, only allowing three shots on net by Vermilion County to the eleven by the home team. Vermilion County goaltender Epp stood strong, not allowing the puck past until four minutes left in the game when JM Piotrowski was able to put a wrister through a number of bodies in front with a shot most likely not seen by the goalie. Late in the period, with the goalie pulled for an extra attacker, a loose puck traveled into the Bobcat zone, and Peoria forward Ben Assad out-hustled Bobcat defender Adam Eby for his 6th goal of the season on the empty-net. Once the final buzzer sounded, what started out as a poor offensive game for the Rivermen turned into a positive effort in the second half of the game.

Check out this photo gallery from Field Pass Hockey’s Tim Lester for action from the evening.

Tim Lester is Field Pass Hockey’s Peoria Rivermen and Quad City Storm photographer and will be providing images from both teams all season long.