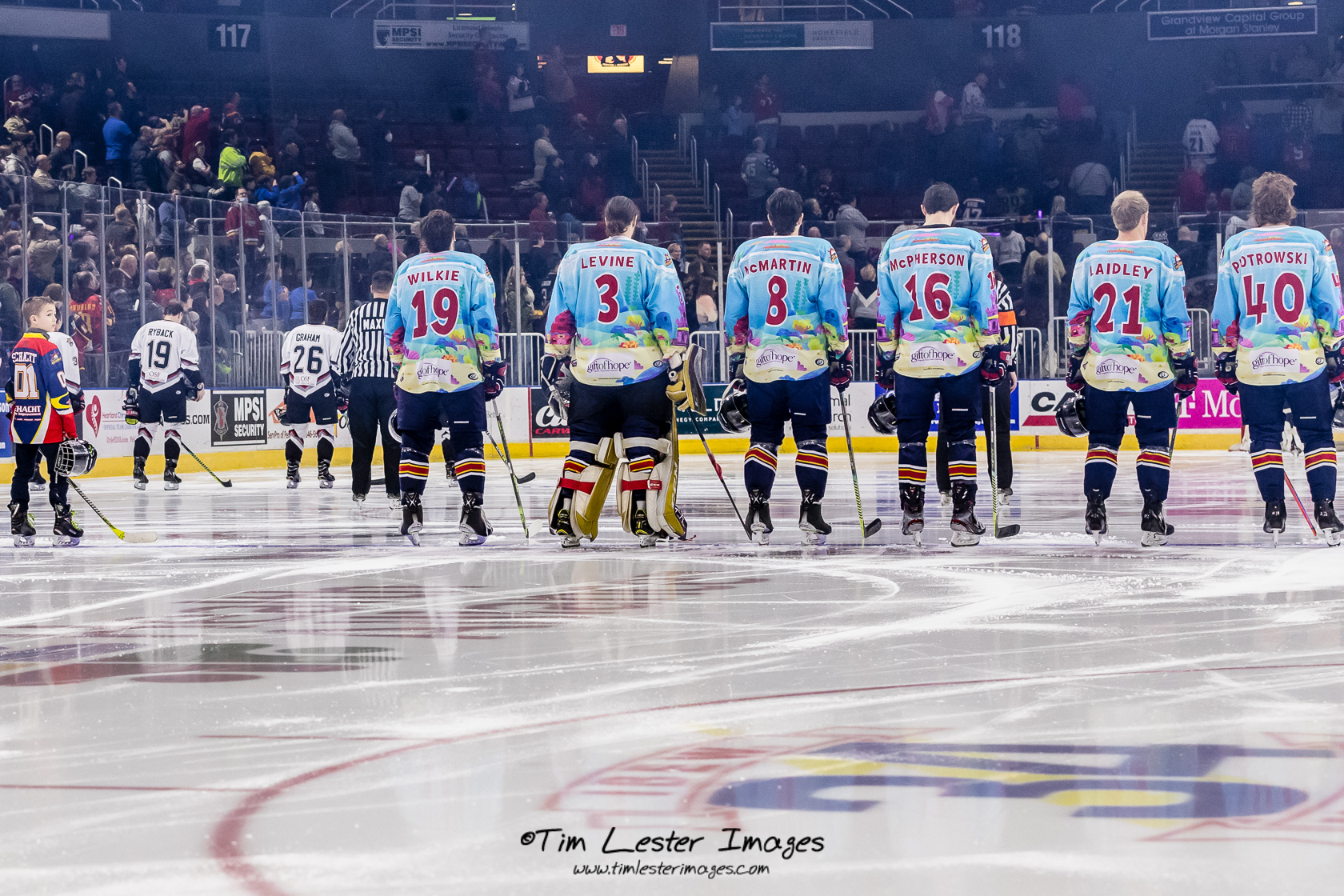 Vermilion County Bobcats and the Peoria Rivermen played for the second night in a row Saturday night, but switched arena’s to the larger capacity Peoria Civic Center.

PEORIA, Ill. – Vermilion County Bobcats and the Peoria Rivermen played for the second night in a row Saturday night, but switched arena’s to the larger capacity Peoria Civic Center. Peoria wore wearing specialty Baby Shark themed jerseys, with either the kids stocking cap giveaway or jersey’s brought over 4100 fans out to watch the action – the largest crowd this season.

The teams skated to overtime the previous night, with the Rivermen taking the win in the Bobcats arena. Peoria started the scoring quickly on their home ice when Marcel Godbout found the back of the net 1:38 into the opening frame on an early power play. Exactly four minutes later Rivermen defenseman Brandon McMartin was able to net his second goal of the season with a wrap around of sprawled out Bobcats goalie Chase Perry. Normally with the size of crowd in attendance, the home team would have plenty of momentum but problems with the ice created delays which slowed both teams. Ironically, the soft ice conditions were only over a few sponsorship logos but were a safety issue. The first period was delayed three times and both teams were sent to the locker rooms with just over six minutes left in the first to allow repairs to take place. In total, there were seven delays due to the ice conditions and SPHL referee Sean Hoppe was seen looking over the ice while on his cell phone during an intermission, while not confirmed he was most likely contacting the league office.

The second period resumed with neither team scoring after the full intermission break. The teams had a two minute ‘timeout’ and the second period started with both teams showing no signs of problems with the ice surface. Rivermen forward Alec Baer was able to score seven seconds into a power play after Bobcats Zak Skeikh was called for cross-checking. Vermilion County’s Aaron Ryback was able to get his team on the scoreboard a couple of minutes later with a one-timer from a face off in the Peoria zone. The second period was paused early again due to the ice conditions and once the third period begun both teams appeared to be a little more cautious. Frustration ensued with the Bobcats during the third period with their players attempting to instigate multiple fights with Rivermen forward Cody Dion.  This did not work in the Bobcats favor until late in the game as the gloves were dropped and both teams having two fight majors in the final seven minutes. When the final buzzer sounded, the home team secured the 4-1 victory with forward Alec Baer earning a point on every Rivermen goal with four different goal scorers.