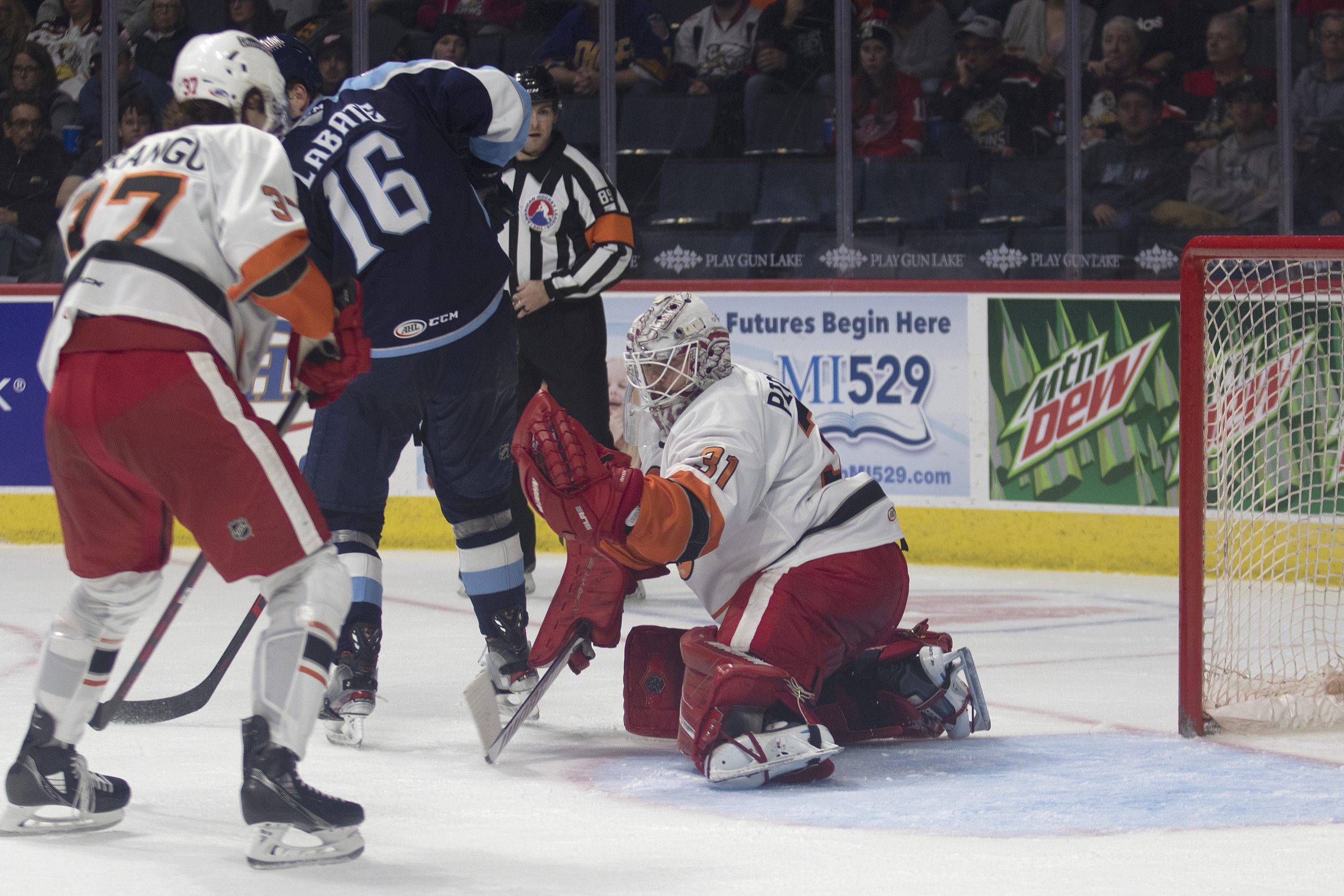 GRAND RAPIDS, Mich. – Coming into Saturday night’s matchup, both the Grand Rapids Griffins and Milwaukee Admirals were desperately searching for wins. Following season-opening wins for both clubs, multi-game losing streaks followed both teams heading into Saturday, with both teams looking to pull themselves from the Central Division basement.

Parker Gahagen was slotted in the starter’s crease for Milwaukee to make his first start of the season while Grand Rapids relied on the dependable Calvin Pickard again in net, whose spectacular play on Wednesday night made the 3-0 final loss to Chicago much closer than perhaps the Griffins deserved. In fact, despite starting off with a 1.68 goals-against average and a .948 save percentage, Pickard skated into this matchup with a 1-2 record.

The Griffins would also be further shorthanded to help Pickard out, as the team’s top center, Joe Veleno, was called up Saturday morning to join the Detroit Red Wings for the night’s game in Toronto. While Veleno carpooled with Detroit GM Steve Yzerman to Toronto, the Griffins got to Van Andel Arena in search of their second win of the season.

Griffins head coach Ben Simon has emphasized the importance of starting on time – unfortunately, they didn’t have the best start in this one as Turner Elson was called for tripping just 34 seconds into the game. That penalty would prove costly as Milwaukee’s David Farrance skated into a prime position and powered a shot through Pickard for a 1-0 Admirals lead 1:34 into this one.

Just a minute later, the Griffins were whistled for too many men on the ice, and early on it looked like another sluggish start was soon to doom Grand Rapids. The Griffins, however, responded with an aggressive penalty kill that kept most high danger chances away from Pickard’s crease. Heading into the middle of the period, the Griffins’ effort was night and day from Wednesday’s game – they hounded after pucks, skated aggressively into the zone with the puck to set up against Milwaukee’s defense, and that effort would yield their first powerplay of the game.

Just as Zach Solow got out of the box, Jonatan Berggren skated into the faceoff circle and used the Milwaukee defender as a screen to wire his first AHL goal past Gahagen and tie the game 1-1.

“For me, it’s been a little difficult.” Berggren said of his game’s development coming from Sweden to North America. “The first few games I think were really bad for me. I’m trying to compete harder every shift – maybe sometimes just grinding. It’s part of the game here. I think it was good for me to have my first goal because the goals can change seasons. Really glad it came tonight.”

Just over a minute after the goal, Taro Hirose snapped a pass to a streaking Kyle Criscuolo, who streaked between the Admirals defenders and snapped a quick shot low blocker that beat Gahagen and quickly put the Griffins up 2-1. The goal was Criscuolo’s first of the season after making his season debut on Wednesday.

Grand Rapids wasn’t done – just over a minute after Criscuolo’s goal, Riley Barber put a shot on net and the effort of Chase Pearson in front of Gahagen’s crease would put him in position to slam the rebound home and put Grand Rapids up 3-1: a surge of three goals in 3:23 that forced Milwaukee to call a timeout and slow the game down.

Berggren started the play with a quick rush down the boards before finding Barber with an excellent pass through traffic and in his first season in North America has started to find his groove early on in this season.

Grand Rapids would take two more minor penalties, but again their penalty kill was up to the task with their killers standing to the task to keep lanes open for Pickard to stop the incoming shots.

This theme would continue for Grand Rapids into the second, as Pearson took an early penalty holding penalty that saw Grand Rapids killing another penalty. However, the denial of any and all Milwaukee chances yielded four straight kills from the Griffins, who came out committed to active sticks and a full competitive effort in this one.

In the middle frame, tensions started to rise as Luke Witkowski absolutely leveled Milwaukee’s Joseph LaBate, who was slow to get up and back to the Admirals’ bench. As the game got more physical, Milwaukee’s Avery Peterson stepped into Jared McIsaac, which prompted Grand Rapids’ Dominik Shine to step in and the two dropped their gloves and entered a spirited bout that saw several heavy haymakers from Shine.

The rough stuff would continue with Witkowski crosschecking Jeremy Davies away from the play, a decision that would cost Grand Rapids five minutes and cost Witkowski the rest of the night halfway through the second. Milwaukee peppered Pickard with chances, but the best look actually came from Grand Rapids as Elson and Criscuolo somehow found themselves on a shorthanded 2-on-0 on Gahagen, but Criscuolo sent the attempted shot wide of the open net. The Griffins managed to kill off the entirety of the five-minute major without yielding a goal and firmly held momentum as a result.

Milwaukee sent a total of 20 shots on Pickard in the second period, but Pickard got sharper with the extra work and managed to turn every chance away that the Admirals threw at him.

“Honestly, it didn’t feel like 20.” Pickard said. “They had a shooting mentally, which got me sharper as the game went on. Tonight, I definitely enjoyed all those shots and really felt it. Our penalty kill won us the game, for sure”

His spectacular play in the second allowed Grand Rapids to skate into the second intermission up still 3-1.

Starting out the final frame, the Griffins took a physical approach to take over this game and not allow Milwaukee easy chances to get in on Pickard. They played the body and forechecked intensely – one of the bigger hits of the night came from Jon Martin smashing a Milwaukee defender into the glass. LaBate skated up to Martin with a crosscheck, seemingly inviting Martin to another scrap. While Martin dropped his gloves, LaBate kept his on and was given a couple of shots for his trouble as the refs stepped in. Martin was visibly upset with LaBate for refusing the dance, and let his would-be partner know verbally even in the penalty box. The Griffins were given an extra two for roughing and – again – were sent to the PK.

As they had all night, the Griffins penalty kill stepped up and choked away any potential Admirals chances. The rough stuff wasn’t done as Mitch McLain and Wyatt Newpower dropped their gloves, though with Newpower’s jersey over his head not much was to be said about this fight. McLain also voiced his displeasure and had to be physically restrained by the official who added a ten minute misconduct to McLain and saw the Admirals’ power forward to the locker room.

With just over three minutes left to play, the Admirals threw whatever they had left Pickard’s way, who used every possible method to keep the puck out of the net at the end. With an open chance at an empty net, Pearson made no mistake from the neutral zone to ice this one away at 4-1. That would stand up as the final on Saturday night as the Griffins skated off to a round of applause from a raucous Van Andel Arena.

What a night for Grand Rapids penalty killers. Last year, the Griffins struggled mightily when down a man, killing penalties at a 74.8% clip (2nd worst in the AHL). After the early PPG against, the Griffins killed off six straight penalties including a five-minute major. Everyone bought into the penalty killing effort tonight.

“Our focus was on being way, way more competitive.” Coach Simon said after the game. “We addressed it with a lot of compete and battle drills. Today, I thought the guys did a great job of elevating and applying what we’re talking about. “

Was it the bitter taste of Wednesday’s loss or the departure of Veleno that had the Griffins play their best game of the season by putting in a total and complete effort from top to bottom? Maybe it was both, but there was no doubt that neither Coach Simon nor the players found that effort acceptable, and following a rough couple of minutes to open the game responded in the biggest way.

Pickard is an elite goalie in this league. He gives the Griffins a chance to win each and every night – it’s up to the 18 skaters in front of him to play the way they did tonight to give him some help. If he keeps this play up, it will be hard for youngster Victor Brattstrom to find more starts, and it will be tough for Grand Rapids to keep Pickard in town. It’s a good problem for the Griffins to have.

With the injury history already accrued for McIsaac, especially following a scary hit from Columbus’ James Malatesta in the Traverse City Prospect Tournament last month, there were certainly more questions than answers heading into this season. McIsaac battled back from that adversity and has thrived as a solid two-way player for the Griffins early on in this season. Early still, but the signs are promising for a young prospect who many in and outside of the organization had feared had stalled developmentally due to the injuries. McIsaac will remain an intriguing piece of the Griffins’ blue line as they fight their way up the Central standings this season.

“[McIsaac] is the kind of guy I love to work with as an older guy.” Lashoff said of the young defenseman. “He’s constantly trying to get better learning his way in this league. He did a great job tonight moving the puck and skating. He does a little bit of everything and we’re going to rely on him a lot to play minutes and be a big part of our defense core.”

The Griffins finish up their homestand Sunday afternoon as the Chicago Wolves come to town, with the puck dropping at 4 PM. The Griffins then turn for a series on the road next weekend with games at Iowa and Rockford.