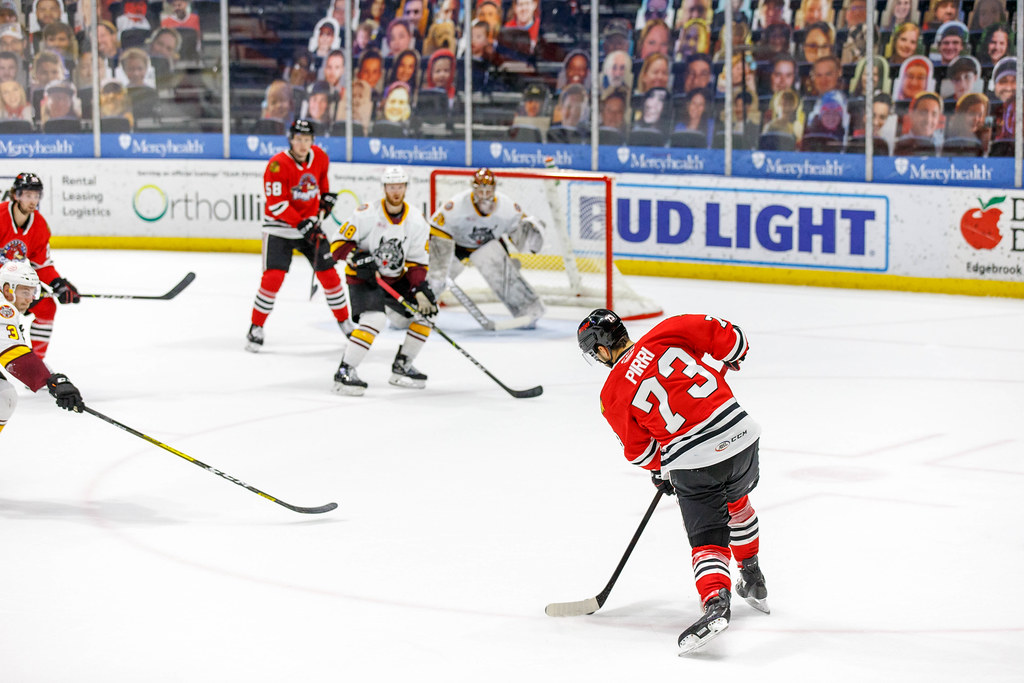 ROCKFORD, Ill. – Brandon Pirri last played for the Rockford IceHogs on March 6. Since then, he has spent most of the last month riding the pine on the taxi squad of the Chicago Blackhawks. Wednesday night, the veteran forward made his return to action in style.

Pirri posted a hat trick, leading the Hogs to a 4-3 victory over the Chicago Wolves at the BMO Harris Bank Center. The win is Rockford’s first in seven tries this season against the Wolves, who are atop AHL standings this season. The IceHogs moved to 7-12-1 despite being outshot 33-17 by Chicago.

Rockford took a 2-0 lead in the first period with a pair of quick strikes. The first came seven minutes in when Evan Barratt hit MacKenzie Entwistle as he came over the boards. Entwistle finished the breakaway opportunity with a nice deke past Wolves goalie Beck Warm.

Rockford’s public address announcer had scarcely finished the call of the first Hogs goal when Josiah Slavin corralled a high bouncing puck to keep it in the offensive zone. Pirri took a pass from Slavin at the right circle and sent a laser past Warm’s blocker at the 7:40 mark.

The Wolves closed the gap to 2-1 4:07 into the second period on a Phil Tomasino goal. Pirri restored the two-goal advantage minutes later with a one-timer from the right dot. Pirri’s second goal of the evening came at 7:58 with assists from Nicolas Beaudin and Slavin.

The hat trick was completed at the 14:50 mark. Andrei Altybarmakyan set the goal up by winning a board battle and sliding the puck into the high slot. Pirri skated over and slapped the puck past Warm for a 4-1 Rockford lead.

Chicago pushed hard in the third period, out-shooting the Hogs 12-3 in the final twenty minutes. Tanner Jeannot converted on a sweet pass by Tomasino at the 3:53 mark. The Wolves power play made it 4-3 at 8:07 on a Dominik Bokk tally. Warm was brought to the bench with two minutes remaining in regulation, but Tomkins (30 saves) and the IceHogs held on for the victory.

Pirri, to the surprise of no one, was voted the game’s First Star. He paced the IceHogs with six shots on the evening. The taxi squad has grounded Pirri for the bulk of the AHL season; Wednesday was just his third appearance for Rockford. In those games, he has posted five goals.

The Hogs hit the road for their next action, traveling to Grand Rapids on Saturday night. Chicago, still atop the Central Division with a 14-3-0-1 mark, visits Iowa on Friday and Saturday.