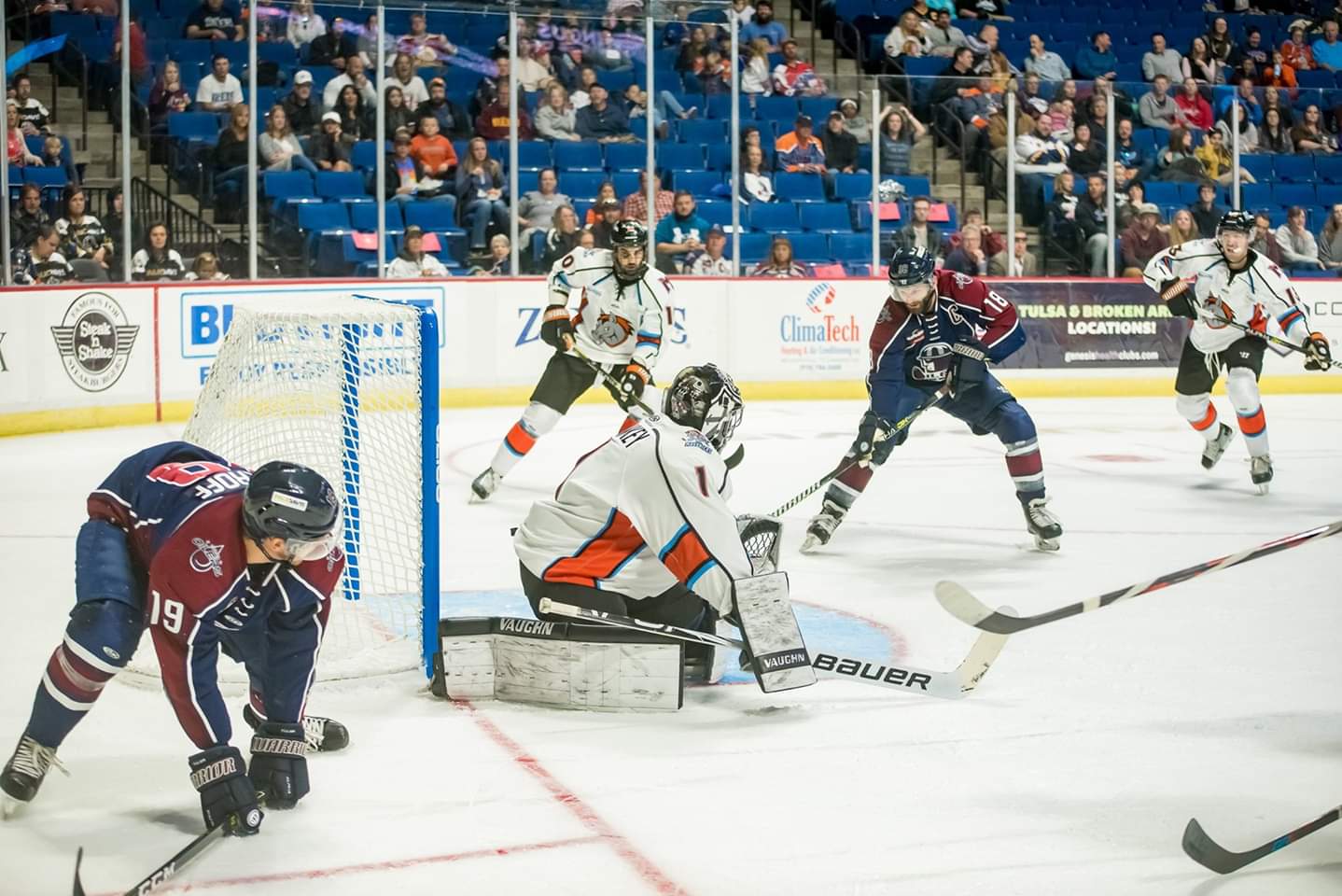 TULSA, Okla.-  Tulsa captain Adam Pleskach played his 400th game for Tulsa on Friday night, while Green Country newcomer Deven Sideroff made his debut for the squad.  If you didn’t know better, you never would have guessed that this was their first regular season game together.

TULSA, Okla. – Tulsa captain Adam Pleskach played his 400th game for Tulsa on Friday night. Green Country newcomer Deven Sideroff made his debut for the squad.  If you didn’t know better, you never would have guessed that this was their first regular-season game together.
The pair found their grove together early, and the immediate chemistry between the two sparked the Tulsa offense.  They each scored a goal in the opening frame, with Sideroff getting an assist after a sharp backdoor pass on the Pleskach goal that sent the Oilers to the first intermission with a 2-1 advantage.
The chemistry was evident off the ice as well, looking more like old friends than fresh teammates outside the locker room. After the game, Sideroff explained how playing with the veteran Pleskach helped ignite his three-point night.

“I would like to say that he makes it easy… oh, there he is,” Sideroff said as Pleskach slowly snuck up behind him, listening with a smile. “He makes it easy to play with him.  He’s obviously a veteran here, for a long time, and I know that everybody who’s come in and played with him has had success and that just happened to me as well.”

Pleskach, meanwhile, was busy signing just as high a praise of Sideroff during his postgame interview.

“He’s good, yeah.  I didn’t really know what we were gonna have coming in,” Pleskach commented. “but he’s actually a really special player.  He’s really patient, and he just has that really high hockey I.Q. that a guy like Jared Thomas has. So, being used to playing with a guy like JT over the last year, and then you add a guy who is that smart and can really play anywhere.” “

The versatility is what allowed the duo to pair up in the first place. Sideroff shifted from the more natural right wing to the left side, allowing Pleskach to man his post on the right.   Playing on his off-side didn’t appear to slow Sideroff down at all, despite having the blade of his stick facing the boards instead of the slot.
Sideroff notched the insurance tally giving Tulsa a 4-2 third-period lead from the left side. He quickly gained control of a pass off the rush from Pleskach that was helped along by fellow fresh face Danny Moynihan. Sideroff pulled the disc into position and released a well-placed, rope of a wrister eluding Kansas City goaltender Hayden Hawkey and found the mesh behind him.

He’s playing his off-wing there because he is right handed and so am I,” Pleskach said. “but obviously that last goal he had there, you know, not many people in this league can do stuff like that.  So, it’s special. it’s a lot of fun.”

Tulsa claimed a 5-2 victory in the end, with Sideroff ending the evening with two goals and a helper, and Pleskach one of each.   The Oilers completely controlled the time of possession after surrendering the equalizer in the second, holding the visiting Mavs to just eight shots total over the final 40 minutes after surrendering 17 in the initial 20-minute installment.   Tulsa wore Kansas City down throughout the game, and completely in the final frame.
Sideroff said an intense week of practice helped him find his place on the squad and conditioned the Oilers to have fresher bodies and minds in period three.

“We practiced pretty hard all week.  I think our team conditioning is up, so we’re not fatigued when we’re out there making plays,” Sideroff said. and that’s big mentally too; everybody is in position,” Sideroff elaborated.  “Me coming in here as the first game with these guys, I know some of them have played here for a long time.  They made it really easy for me, and I just felt comfortable doing it all”

While this was the first game in Tulsa for the new guy, it was a milestone for the veteran captain.  Pleskach has now played 400 games in an Oiler sweater, second, for now, behind only the 428 appearances of Dougie Lawrence.
Pleskach concluded his postgame thoughts by talking about why he has made Tulsa his home, how he came to be with the Oilers for a seventh season, and encouraging players to continue coming to T-Town.

“It was pretty easy to make it home here, make Tulsa home.  I played (in tulsa) my first year, sorta came out of nowhere, I didn’t think I was going to wind up in Tulsa and I was just here one day,” Pleskach began.  “I had a good year and probably could have moved on. We were in the Central League and I had choices to move on to different teams, but I definitely didn’t want to bounce around teams at this level if I was going to be at this level.  I got really used to the people. The people here are so great and take care of me a lot, and I’ve just made it home over the last several years.”
“Whoever comes in and out of this team, I like to just treat them good and show them what Tulsa is like,” the captain continued. “and the past few years have shown that people want to come here now.  I like to be a part of that. I want people to see that it’s good to be in Tulsa. Even if you should be at the next level, having a stop here in Tulsa isn’t bad. It’s a great city, and you should be happy to be here for the time you are here.”

It is likely just a short stop for Sideroff before being recalled by the San Diego Gulls, for whom he has played the last three seasons.  The Gulls hope playing top-three minutes with the Oilers top guns will help spark Sideroff’s goal-scoring, and they will be pleased with his ECHL debut.  Despite this potential future, Sideroff remains focused on helping Tulsa build off their season-opening win in the here and now.

“Yeah, just really not take a break here.  Keep it rolling, going tomorrow night as hard as this game.  Take it the same way, and I’m sure we’ll see the same results.”

The Oilers will need to be ready on Saturday night, as a revamped Allen Americans squad comes in looking to make an early statement after missing the playoffs for the first time a season ago.  The atmosphere inside the BOK Center will be tense as these high-powered and heated rivals clash for the first time in 2019-20.  The puck is scheduled to drop at 7:05 p.m. CT.
You can follow the Oilers all season long by following us on Twitter.  Follow @SinBinOilers for our Tulsa take, and @SinBinNews for all your AHL, ECHL, and SPHL news and notes.