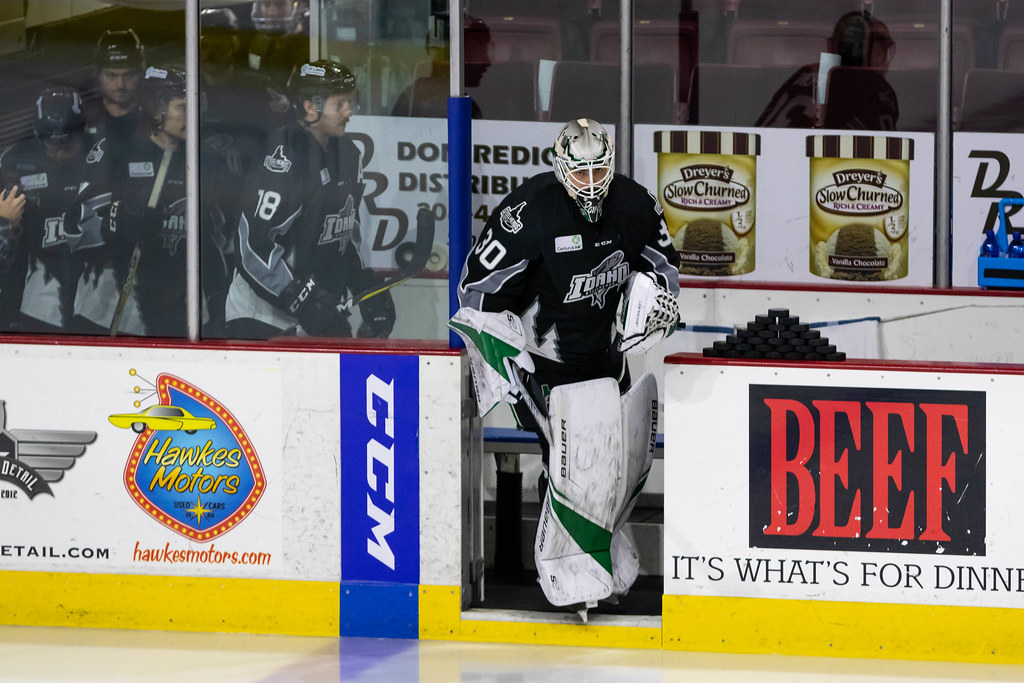 BOISE, Idaho – Hockey teams can do a number of things to get the attention of a struggling goaltender.

BOISE, Idaho – Hockey teams can do a number of things to get the attention of a struggling goaltender. Sometimes, the goalie in question can be pulled mid-game if issues are immediately present. Other times, netminders need a bigger jolt in the form of a healthy scratch or long-term benching.
One Idaho Steelheads goaltender falls into the latter category.
On January 15, Colton Point was officially placed on reserve before Idaho hosted the Tulsa Oilers. With the Steelheads utilizing an emergency backup goaltender just three days before, it left many fans scratching their heads as to why the Dallas Stars prospect was placed on reserve after backing up Tomas Sholl just two games prior in Fort Wayne. Even this correspondent was under the impression that Point was on the outs with Idaho, especially with Sholl on an AHL call-up and the Steelheads rostering two goalies on loan from the SPHL.
Nine days later, Point was activated off reserve and added back onto the main roster.
Between January 10 and January 24, there must have been a conversation where the North Bay, Ontario native and the Stars organization came to an understanding. After posting a 5-7-1 record, 3.15 GAA, and .893 save percentage in his first 14 games played, Point regrouped. Even with two losses and a 20-minute relief appearance, he boasted a 1.71 GAA and .907 SV% before being assigned to the Texas Stars by Dallas on February 15. In his only AHL game this season, Point made 28 saves on 32 shots in a 4-0 loss to San Antonio on November 22.

With three non-rostered goaltenders signed to NHL contracts, Dallas may need to re-up on their only standard-contracted netminder when Texas Stars starter Landon Bow becomes a restricted free agent this offseason. Both Point and current Texas backup Jake Oettinger are on entry-level contracts worth $925,000 per year, while Bow is earning $700,000 this season. Point’s deal ends after the 2020-21 campaign, while Oettinger’s contract expires after 2021-22. Sholl is currently on a one-year, two-way deal with the Texas Stars.
While Bow and Sholl will no longer be contractually bound to Dallas or Texas after 2019-20, the same can’t be said for Point and Oettinger. Dallas could move on from the 24-year-old Bow after a mediocre season (12-10-2, 3.23 GAA, .897 SV%) and go with Oettinger (10-12-3, 2.64 GAA, .911 SV%) as the starter for Texas in 2020-21. With Sholl having yet another standout year in the ECHL (21-7-5, 2.24 GAA, .921 SV%), he may very well earn a spot as backup to Oettinger next season should the Stars not re-sign Bow.
This leaves Point as the starter for the Idaho Steelheads in 2020-21. If that’s the case, then the increased focus and effort he’s exhibited over the past three games needs to be applied to the 2020 offseason and into training camps. In spite of the surrounding dominoes that may fall, Point has still been granted a second chance to impress the top brass in the Dallas organization.
How he makes the best of it is up to him.