The Peoria Rivermen are making their fourth finals appearance, while the Roanoke Rail Yard Dawgs are playing for the franchise’s first championship

PEORIA, Ill.– The President’s Cup Playoffs this season have been one for the ages. The Peoria Rivermen are making their fourth finals appearance in franchise history, while the Roanoke Rail Yard Dawgs are playing for the franchise’s first championship.

The last time these two teams met in the playoffs was in 2019, when the SPHL held a challenge round. The challenge round meant that the number one seeded Peoria Rivermen could pick from teams ranked fifth through eighth in the playoff grid. The Rivermen elected to play the number five seeded Rail Yard Dawgs, which was a decision they would regret. The Rail Yard Dawgs swept the top-seeded Rivermen in a season that Peoria dominated before the playoffs. 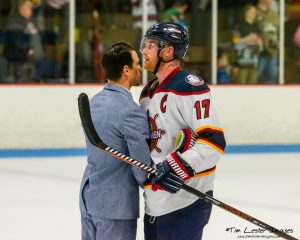 How They Got Here:

In the first round, the Rivermen were forced to a three-game series against the defending champion Pensacola Ice Flyers, but they took the series two games to one.

After that, they faced an all too familiar foe in the Quad City Storm. The semifinal series against the Storm did not get off to a good start for the Rivermen, falling 4-1 to the Storm at the Taxslayer Center. The series shifted back to Peoria for games two and three, where the Rivermen won both to secure their finals berth.

Roanoke had a little bit of a more challenging path to the finals. The Rail Yard Dawgs came in as the eighth seed and had to get through the William B. Coffey trophy-winning Knoxville Ice Bears. After spotting the IceBears game one of the quarterfinal series, they stormed back to win games two and three.

In the semis, they faced off against the second-seeded Huntsville Havoc. After holding off the Havoc in game one, the “dirty Dawgs” defense took over in game two and secured a shutout, upending the Havoc and punching their ticket to the finals.

Series Schedule (Home team in CAPS and all times local):

Peoria took the regular-season series 4-1. The teams met twice in Roanoke, where they split, and the Rivermen won all three games at home in dominating fashion. In March, the three games in Peoria took place in the middle of Roanoke’s nine-game losing streak which threatened their chances of making the playoffs. 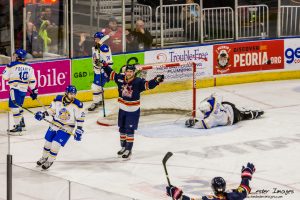 The Rivermen have struggled when playing from behind, so one key to success is to score first. They have a clear advantage offensively, housing the top four scorers in the playoffs and the first 80-point scorer in a decade in Alec Baer. This team knows how to score goals.

What they can’t do is fall into the game that Roanoke wants them to play. The Rail Yard Dawgs like to slow down the game, force the game into the corners, and take away everything in the middle. Peoria needs to find some space and let the top line go to work.

The offensive contribution from the defense will also have to play a part in this series. Lordanthony Grissom currently sits second in playoff scoring with seven points (2 goals, 5 assists). Grissom will need to continue to find ways to either get the puck on the stick of the forwards or find the back of the net.

Goaltending will play a significant factor in this series that features two back-to-back games. Eric Levine, who has been the backbone of this team all season, has struggled in these playoffs, putting up a 4.04 goals against average. In his five appearances, Jack Berry has stepped up his game. For this to be a successful playoff series that results in a President’s Cup championship for the Rivermen, both netminders will need to be playing at the top of their game. 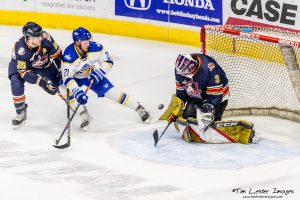 Roanoke has been the most penalized team all season long, which has carried into the postseason. They have to ensure they don’t take the bad penalties.

Peoria has an explosive power play unit, and the fewer opportunities you give them, the better off the Dawgs will be.

Goaltending was in question heading into the postseason, but Sammy Bernard has played incredibly until he was injured in game one against the Havoc. Austyn Roudebush stepped in, and the team didn’t miss a beat. Both netminders are going to have to continue this stellar play.

The Rail Yard Dawgs will also have to continue their dominant 5-on-5 play. To this point in the playoffs, they have only given up three even-strength goals.

Lastly, the depth Roanoke has will need to score some goals. Peoria has the ability to lock down the Roanoke top line, and because of that, the secondary scoring will be vital to winning this series.