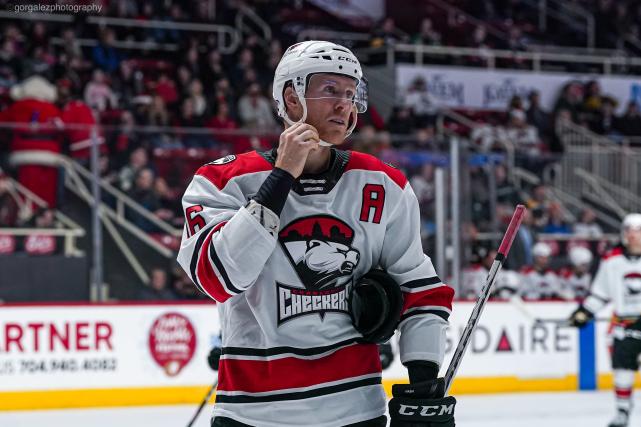 #AHL | @CheckersHockey hosts @monstershockey in a two-game set this weekend. @FPHCheckers gives us all the details, including who to watch from both teams, in his latest preview.

CHARLOTTE, NC – This weekend, the Charlotte Checkers will host the Cleveland Monsters of the North Division for a two-game set. The last time these two teams played was in Cleveland, where the Checkers won both games against the Monsters. Game one of the weekend set will be on Saturday, January 21st for a 4 p.m. Eastern puck drop, which will be North Carolina Night.  The team will be wearing NC Night Inspired jerseys and having food from the state featured in the Bojangles Coliseum. Their last game of the set will be on Sunday, January 22nd at 1 p.m. Eastern. In the last preview featuring both of these teams, a couple of players managed to get points in those two games. Can we see a similar repeat in this preview with the games being in Charlotte this time?

This seems to be like déjà vu as Trey Fix-Wolansky once again will be featured in a preview for the Monsters. The Edmonton, AB native still leads the way for Cleveland this season. In 29 games played, Fix-Wolansky has 17 goals and 20 assists for 37 points on the year. He is currently on pace to finish the season with 38 goals and 45 assists for 83 points in a projected 65 games played. Fans consider Fix-Wolansky the powerhouse of not just the offense, but the Monsters team as a whole. The combination of speed, scoring touch, and drive just makes Fix-Wolansky an unstoppable force for Cleveland. In the last set of games between the two, he managed to get three points in the two-game set.

What makes no sense, not just for Monsters fans, but fans of the AHL as well, is that Fix-Wolansky wasn’t named to the AHL All-Star Classic Roster. For the season he is having, Fix-Wolansky should have been nominated for the All-Star Classic. Nothing against David Jiricek, who will be representing the Monsters at the game, but it feels like Fix-Wolansky should be there as well. Just in the last 10 games played, Fix-Wolansky has three goals and three assists for six points. That alone should have given him a better chance to be nominated. Either way, fans need to keep an eye on him during the weekend. This also goes for the Checkers’ defense if they want to keep their winning streak against the Monsters ongoing.

When thinking about guys who contribute to the Monsters, there are some guys who are overlooked because of their absence on the scoresheet most of the time. Although, guys don’t always have to be named on a scoresheet to have an impact on their teams. This can be true for O’Fallon, MO native Josh Dunne. The Monsters, especially the offense, has been either riddled with injuries or call-ups this year and needed someone to step up as a leader for the team. Coming into the role in a big way has been Dunne as the de facto guy to lead this scrappy Monsters team trying to fight out of the North Division cellar.

On the season, Dunne has eight goals and eight assists for 16 points in 34 games played. While that doesn’t jump off the page at fans, what he does off the scoresheet can be impactful for the Monsters as well. He has been given ample opportunities to help the team turn the season around in Cleveland. If he can manage to loosen up on the ice and not get in his own head, he could have a breakout finish to the 2022-23 season. He’s already surpassed his career-high in points (16) and has tied his high for goals (8), so it’s possible to see those numbers grow if he can manage to just play his game and not get in his own way. For the Checkers, they will need to get Dunne off his game and prevent him from being that impactful guy being overlooked despite not showing up on the scoresheet.

The last Cleveland player that fans should keep an eye on is Cambridge, ON native and Monsters goaltender Jet Greaves. While the season hasn’t been great for the 21-year-old sophomore goaltender, there is not much he can do with the team struggling with constant roster changes. Just recently coming back from a couple of emergency goalie stints in Columbus, he seems to be more settled in the net. Despite losing to the Lehigh Valley Phantoms in overtime 2-1 on Wednesday night, it was a well-complete game for Greaves. Greaves seemed to be the main reason why the Monsters stayed in that game. Furthermore, that game was lost mainly due to puck luck more than anything. Maybe given time to rest up while in Columbus has calmed down the young goaltender, who is trying to help the Monsters climb back in the North Division in his second year in the AHL.

All the Checkers need to do is basically what they did last time they faced Greaves, get to him early. If the team can manage to score early and get the goaltender and the defense on the back foot, there is a solid chance the Checkers take at least one of the games over the weekend. Although, don’t let the 6-7-3 record fool you; Greaves can steal games when he is playing to his potential. It’ll be an interesting series for the Checkers against Greaves.

When it comes to the Monsters, there are some guys on the Checkers that they will need to worry about if they want to take some points this weekend. 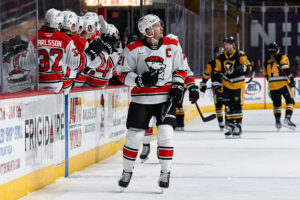 It comes as no surprise for Checkers’ fans that the first player to watch is their captain Zac Dalpe. Dalpe last week was sent back down from the Florida Panthers, and cleared waivers, to re-join the Checkers roster. The 33-year-old has spent the last couple of months up in the NHL with the parent club, scoring two goals and two assists in 11 games played. The Paris, ON native, brings a boost to the offense in way of scoring, and also to the team as a whole leadership-wise. Being able to have their captain back is huge for this Checkers team, who is currently sitting in third in the Atlantic Division fighting to stay in a Calder Cup Playoff spot.

On the season with the Checkers, Dalpe has 10 goals and six assists for 16 points in 20 games played. In his second game back with the team against the Wilkes-Barre/Scranton Penguins, he managed to get a primary assist, banking a pass off of defenseman Matt Kiersted who also came back down to the team with Dalpe. After the Checkers’ last game back on Sunday, January 15th against the Penguins, head coach Geordie Kinnear commented on how everyone was glad to have their captain back. As long as Dalpe plays the way he did against Wilkes-Barre, there is a very good chance the Checkers take more than two points this weekend versus Cleveland. 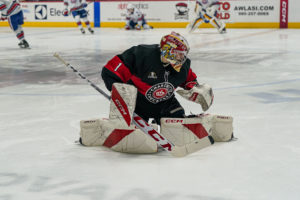 Seems that one cannot talk about one team’s goalie in a preview without mentioning the other team’s goalie as well. In this instance, fans cannot overlook Checkers goaltender Mack Guzda. In his rookie season, the Knoxville, TN netminder is having himself a pretty decent year for the Checkers. As of right now, Guzda has a record of 9-4-2 with a goals-against average of 2.72 and a .908 save percentage. He is managing to do this while sharing the crease with JF Berube and Alex Lyon.

In his last game, Guzda secured the second star of the game against the Wilkes-Barre/Scranton Penguins by giving up only one goal in a 19-save effort. The Checkers won that game 3-1 on that Saturday, January 14th on Star Wars Night. It will be interesting to see if Kinnear will go with Guzda in game one of the weekend on North Carolina Night. If not, it will be an easy conclusion that he will turn to him for Sunday’s game on the 22nd. Either way, as long as Guzda keeps playing the way he has been all season, he will be a huge catalyst for Checkers’ wins this upcoming weekend. 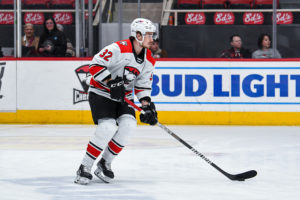 If Checkers fans kept up last weekend against the Penguins, it comes as no surprise that Gävle, Sweden native Lucas Carlsson needed to be in this preview. The 25-year-old defenseman had himself a weekend against the Penguins on Star Wars Night and Hockey is for Everyone Day. Carlsson scored a goal in each game over the weekend to help the Checkers secure three of four points over the two-game set. His second goal came from a beautiful one-time shot from the blue line. So far on the season, Carlsson has six goals and ten assists for 16 points in 27 games played. Currently, he is on pace to finish the year with 14 goals and 23 assists for 37 points in 62 games played.

When asked last week about his confidence after scoring in back-to-back games, he said that the “confidence is good”. Furthermore, if the confidence is that high, that should be a helpful indicator that fans could be in for a possible repeat performance this weekend. Outside of his scoring touch over the last couple of games, Carlsson plays with a sense of high poise on the defensive side of the game as well. Carlsson has a great sense of playing 200-foot hockey and is helpful on both sides of the puck in all zones. Fans need to keep an eye on the 6’0″ Swede over the weekend to see poetry in motion on the ice.

Where are they in the standings?

As of January 19th, the Charlotte Checkers are sitting with a record of 19-4-2-2 with 42 points on the season in 37 games played. That puts them third in the Atlantic Division behind the Providence Bruins (51 points) and ahead of fourth place Wilkes-Barre (41 points). They are 6-3-0-1 over their last 10 games.

The Cleveland Monsters currently sit with a record of 14-17-3-2 with 33 points after 36 games played. Cleveland sits in last place in the North Division, one point behind the Belleville Senators (34 points) with a game in hand on said Senators. In their last 10 games played, the Monsters are 2-6-2-0.

Thank you to Deana Weinheimer for the Cleveland Monster player suggestions for this article.