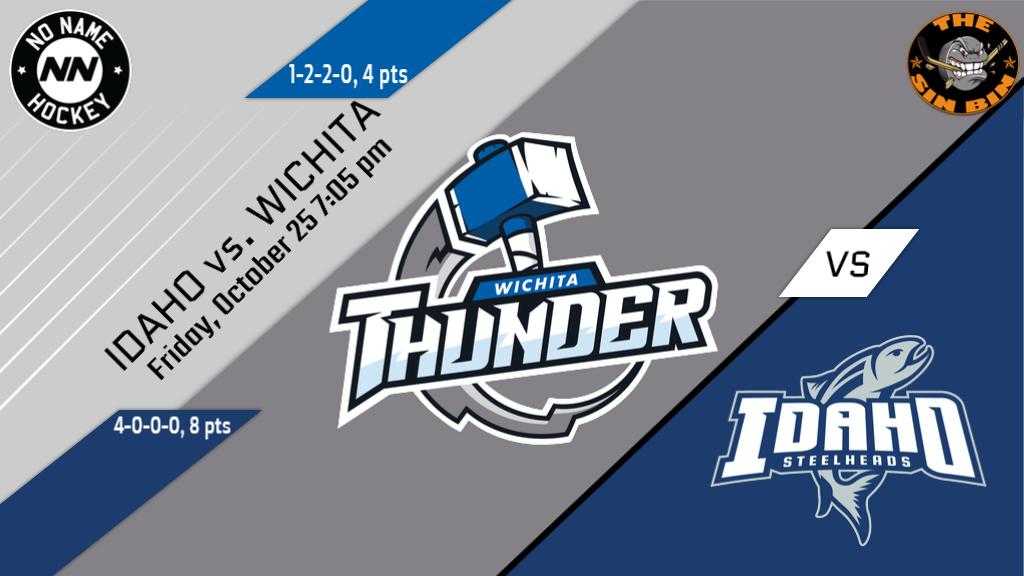 WICHITA, Kan. – The Wichita Thunder are in the middle of a one-game-in-12-day stretch and will finish up their three-game mini-series with the Idaho Steelheads tonight at INTRUST Bank Arena.

The Season Series so Far:

Last Friday night, the Steelheads tilted the ice for the first portion of the opening frame and led 17-8 in the shot department. Wichita had a few good chances that were stopped by Idaho netminder Tomas Sholl. Will Merchant broke the scoreless tie at 15:49 as he one-timed a seam pass over Mitch Gillam to make it 1-0. Ostap Safin tied the game with just over six minutes remaining during a net-mouth scramble for his first goal of the season. Colton Saucerman scored at 4:50 of overtime to give Idaho a 2-1 win.
The next night, Steven Iacobellis and Fabrizio Ricci scored in a losing effort for the Thunder, who lost 5-2 to close out a three-game road-trip with a 0-2-1 record. Merchant had two goals on the night for Idaho.
Idaho leads the season series, 2-0-0-0, and can clinch it with a win tonight.

The Thunder added a massive piece to their offense on Thursday, signing well-traveled forward Jack Combs. The 31-year-old veteran from St. Louis, Missouri, is expected to make his Thunder debut tonight, and it couldn’t come at a better time for the Thunder offense, which has sputtered out of the gate. Entering Friday’s game, the Thunder offense has managed to put up more than 35 shots in a game one time and is next-to-last in the league with an average of 27.4 shots per game (they have a total of 137 shots on goal in 309 minutes played this season). The power play is operating at a paltry 9.5 percent clip (2-21 so far), which is sixth-worst in the league. Combs figures to help in both areas.

Idaho netminder Tomas Sholl is off to an impressive start in net for the Steelheads. The reigning ECHL Goaltender of the Week is 3-0-0-0, with a 1.30 goals against average and a .959 save percentage. The 25-year-old turned aside 24 of the 25 shots he faced in a 2-1 win over Wichita last Friday night.
Under contract with Texas of the American Hockey League, Sholl has appeared in 61 career ECHL games with Idaho and Adirondack with an overall record of 43-12-4 with seven shutouts, a 1.99 goals-against average and a save percentage of .935. Last season, he earned a spot in the ECHL All-Star Classic while being named to the ECHL All-Rookie Team and the All-ECHL Second Team.
Join Matthew Will and me for The Sin Bin Pregame Show starting at 6:30 pm CT, exclusively on The Sin Bin app.