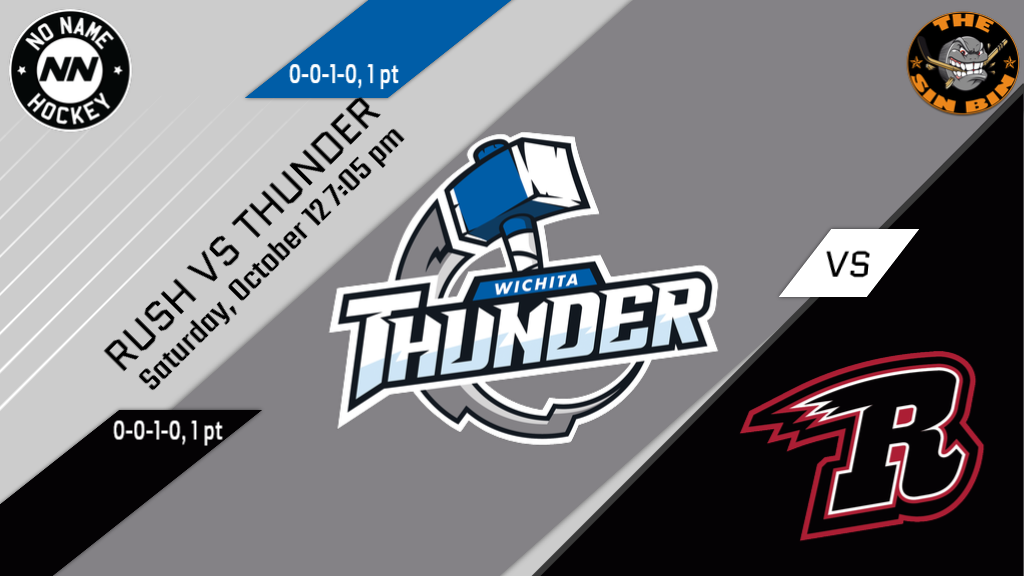 WICHITA, Kan. – Tonight’s matchup between the Rapid City Rush and Wichita Thunder features two former Thunder players going head-to-head behind the bench; former defenseman Daniel Tetrault and former right-winger Bruce Ramsay.
Both teams are coming off losses in overtime but in different fashions. Which team will get their first win of the season?

The Wichita Thunder suffered a case of the jitters and quickly fell behind the Indy Fuel 3-0 in the first 12 minutes of the contest on Friday night. Chris Crane‘s goal 25 seconds into the second period started the team on the comeback trail, which ultimately led them to tie the game at 4-4 when Beau Starrett sniped a shot over the shoulder of Fuel netminder Charles Williams with 5:02 remaining in regulation. Dylan Wells was the story in overtime for Wichita, making several great saves to keep the Thunder in the game. But, Derian Plouffe scored with 4:33 of the overtime to give the Fuel the extra point, and a 5-4 win. Wichita is now 2-0-1-0 in their last three season openers and improved to 14-12-2.
On the other side, the Rapid City Rush got goals by Alex Rauter in the first and Tyler Poulsen in the second period but surrendered their lead to the Allen Americans in overtime, 3-2. Allen newcomer Jordan Topping had two goals for the Americans, including the game-winner at 2:58 of the overtime.  While the Rush losing streak on opening night continues for a fifth straight year, the team did manage to earn a point on opening night for the first time since their last win at the start of the 2014-15 season, their first in the ECHL. That night, they beat the former rival Colorado Eagles by a 5-1 score at home. Since then, the Rush are 0-4-1-0 on the opening night of a new season, losing twice to Allen in that span.

Thunder head coach Bruce Ramsay on the team’s ability to get a point after being down 3-0 in the first 12 minutes of the game last night:

“It was incredible for those guys to go down like that and build themselves back to get back in the game. And down 4-3 with less than five minutes left and score a big goal like that was huge, too. So, there’s a lot of positives to take away from this game, but, there’s also a lot of correctable issues, too.”

Rush-in’ Over to the Other Side

After a turbulent 2018-19 season, the Rush went through a roster makeover of their own in the offseason, with Tetrault only retaining nine players from that squad. Additionally, the Rush organization paired up with the Arizona Coyotes, and have seven players on AHL/NHL contracts on their roster.

Wichita captain Riley Weselowski will play his first game against his former club tonight. He spent portions of nine seasons with the Rapid City Rush, playing in 583 Central Hockey League (CHL) and ECHL regular-season and playoff games. He won a championship in 2009, as well as several major CHL season-ending awards with the Rush.