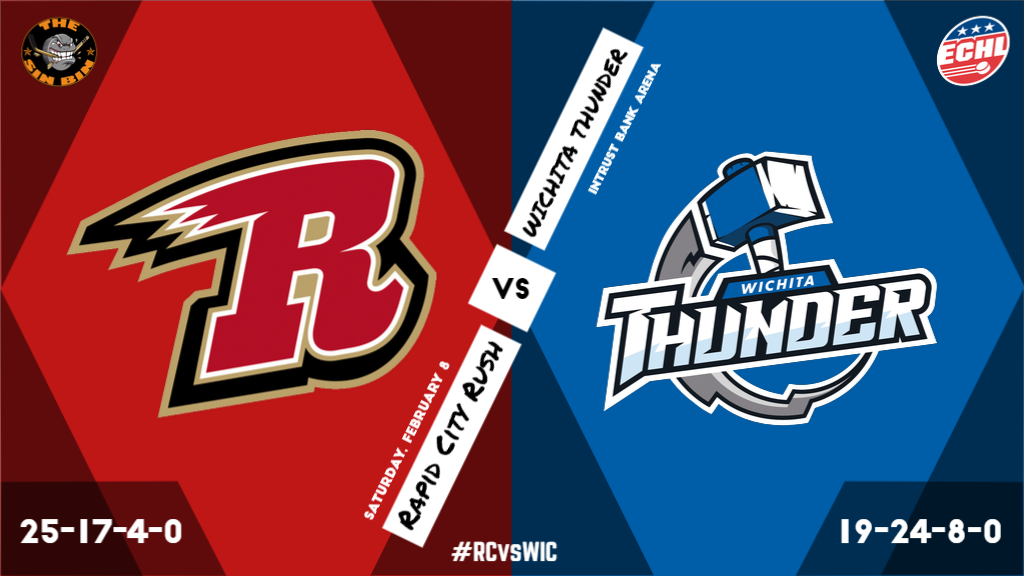 WICHITA, Kan. – The Wichita Thunder begins a two-game set against the Rapid City Rush tonight. The games have the potential to bring Wichita to within four points of a playoff spot.

WICHITA, Kan. – The Wichita Thunder begins a two-game set against the Rapid City Rush tonight. The games have the potential to bring Wichita to within four points of a playoff spot.

Wichita’s home-ice advantage can be looked at in a number of ways. Against Allen, it is anything BUT an advantage. But against Rapid City, the boys in blue always find a way to get it done.
One of the biggest weekends last season was at the beginning of December when Wichita won all three games in a three-game weekend set against Rapid City. One that featured Stuart Skinner‘s first professional shutout.
The Thunder are 14-8-3-0 at home this season while just 5-16-5-0 on the road. Wichita is also three for five in home overtime games this season.

Wichita is still a very capable playoff team, even if the 1-8-1-0 last 10 games have them on a downward slope. The two games with Rapid City this weekend have the potential for Wichita to jump rivals Tulsa in the standings.
As the opening weekend of April comes closer and closer, games begin to mean more and more in the Mountain division, especially when playing games against the teams near you in the standings. Wichita’s next five games are against teams within eight points of them in the standings.

Wichita has allowed a powerplay goal in eight straight games. On top of that, the Thunder have failed to score on the powerplay in their last two games, a recipe for disaster. On the bright side, Wichita only took two penalties last night for just the second time in 14 games.

Matthew Harding and I will have the Sin Bin pregame show for you tonight at 6:30pm on the Sin Bin app and ECHL.tv to break down everything you need to know for tonight’s matchup.