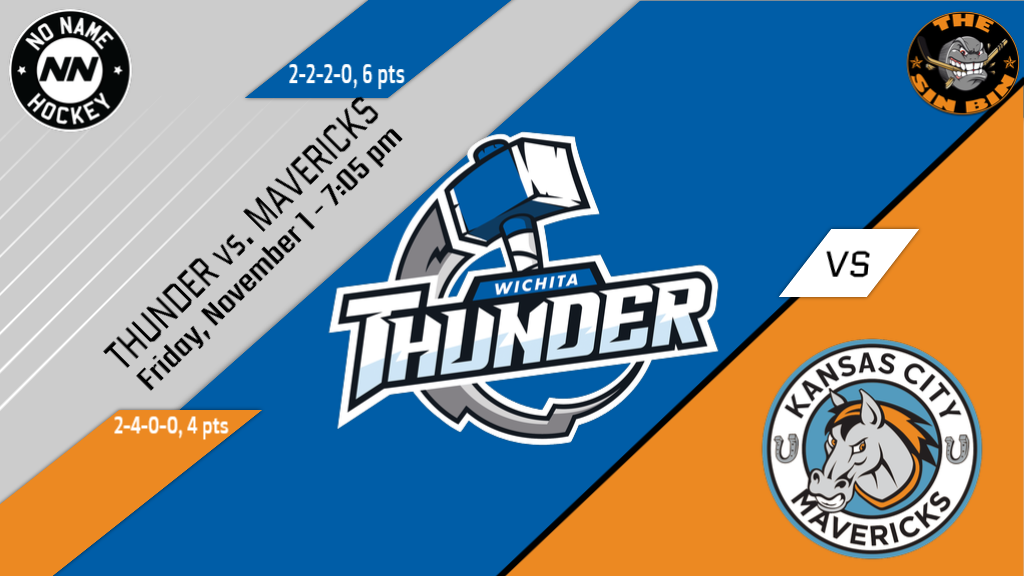 The Wichita Thunder kicks off a very busy month of November tonight, opening a three-game-in-three-day stretch with the Kansas City Mavericks.

WICHITA, Kan. – The Wichita Thunder kicks off a hectic month of November tonight, opening a three-game-in-three-day stretch with the Kansas City Mavericks.

The Thunder will play 15 games in 30 days this month, but the good news is that Wichita will not travel more than six hours from home. Of the 15 games, ten will be played at INTRUST Bank Arena, where the team is 2-0-1-0 this season.
The Mavericks will also be busy this month, playing 13 games in the next 30 days. Seven of the 13 games will come at Silverstein Eye Centers Arena.
Collectively, the Mavs and Thunder will play each other six times this month.

The Thunder offense took a hit this week when Nolan Vesey and Steven Iacobellis were recalled to Bakersfield of the AHL. Initially, Vesey was called up due to an injury to Joe Gambardella. Iacobellis was recalled when Vesey suffered an upper-body injury following a fight last Saturday night.
The roster shuffling was not over for Wichita, as Bruce Ramsay acquired netminder Evan Weininger from Allen for future considerations. This would seem to imply that neither Dylan Wells or Stuart Skinner will be returning to the Thunder roster anytime soon, as Shane Starrett continues to recover from a lower-body injury. Look for Weininger to get at least one start this weekend.
Finally, the team announced Wednesday that Kelly Cup champion forward Tommy Mele is joining the squad. The 33-year-old forward has played in 324 ECHL games, piled up 157 points (86G, 71A) and 607 penalty minutes.
On the other side, the Mavs have all-star defenseman Cliff Watson back in the fold after a stay with the AHL’s Chicago Wolves. They are currently without the services of Mason Morelli and Mitch Hults, who are with the AHL’s Stockton Heat.

Tonight’s contest will be the first time Mavericks forward Ryan Van Stralen has played against his former club. In 73 regular-season games in a Thunder uniform, the native of Prescott, Ontario posted 34 points (16G, 18A) and 105 penalty minutes. Thus far for the Mavs, he has played in five games and posted three points (1G, 2A).