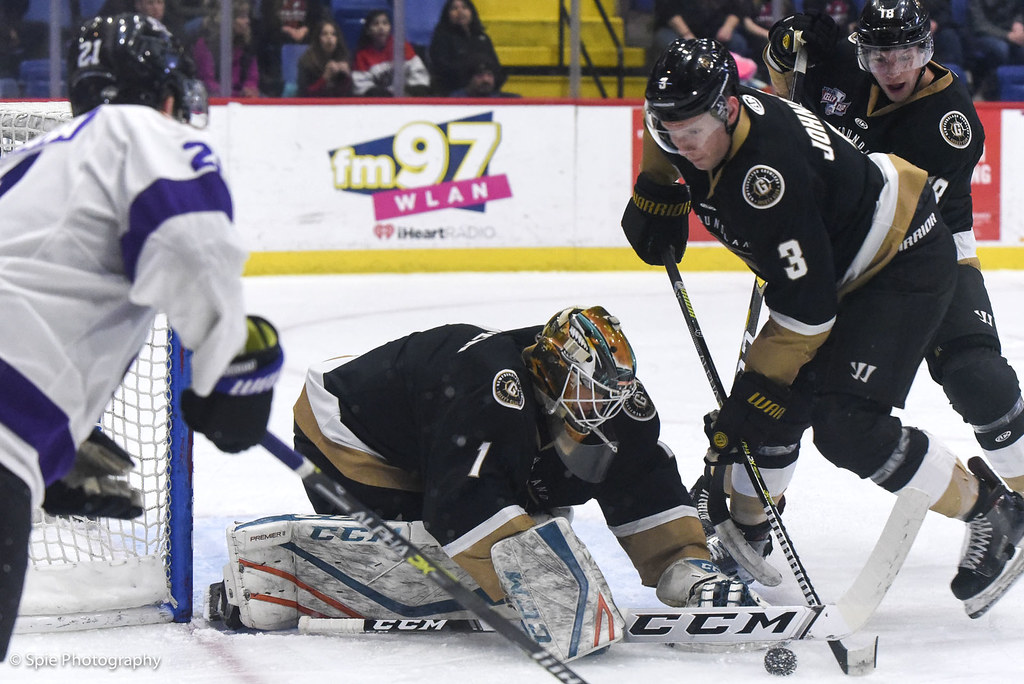 ETOBICOKE, ON – If you asked the majority of the hockey community who Parker Gahagen was just one year ago, you wouldn’t have many answers.

TORONTO – If you asked the majority of the hockey community who Parker Gahagen was just one year ago#, you wouldn’t have many answers. Now, he has quickly become one of the most significant goaltending prospects in the minor leagues.
When I first saw Gahagen in person, it was at a postgame press conference on March 7. Parker came out of the dressing room, examined the four reporters (a low number by Marlies standards), and stopped in his tracks like a dear in headlights and said, “Woah.” Now with a camera, big lights and four media representatives looking at him, his headlights have turned to smiles, saying: “Oh, hey guys.”
Gahagen spent last season off serving in the US Army. He took advantage of the Work Class Athlete Program, which helps many soldiers prepare for the Olympics. However, one of the rules is you’re not allowed to be in it more than three years prior to the next Olympics, which meant Parker needed to take a year off.
He told The Sin Bin that he had a positive focus and trained as hard as he could, playing as much beer league hockey as possible.

“There’s really no reason to get down or fret during the situation; there’s nothing you can control about it.”

I knew his name before I saw him. When I briefly covered the Newfoundland Growlers in December, I remembered his name. I knew that on December 6, he was called up to the Growlers after playing a solid month with the SPHL’s Evansville Thunderbolts. I thought it was quite an adjustment jumping from the SPHL to the ECHL.
More recently, it struck me when he got called up to the AHL’s Toronto Marlies. I knew he was good, but not 0.940 SVS% good.

With the #Marlies calling up Parker Gahagen, it's important to look at how far this man has come. In just 11 games, he has a 0.947 SVS%. In his series against @BramptonBeast, he rocked a 0.983 SVS% and a 0.50 GAA. Hard to think Parker was in the @SPHL to start the season.

“There’s a bit of adjustment going from one league to the next. It’s a matter of speed, I guess, as you go up. Also, the quality of shots and plays.”

The day he got the call to the Newfoundland Growlers? It was during a series in Quad City, almost 4,000 kilometers from Mile One Centre.

“At the time, Newfoundland wasn’t on my radar. It wasn’t my top choice – just because of the distance.”

Later, Gahagen spoke about the resources and the people and said:

“It’s definitely the best place to play in the ECHL.”

Being from St. John’s myself, I felt compelled to ask him what was the first thing about Newfoundland he looked up on Google. Jokingly, Gahagen looked at me and laughed. He told me he mapped how far he would be from his wife in Colorado, which runs about 5,600 km.
But jokes aside, he spoke to how important of an opportunity the Growlers is (and was) for him. He expressed how getting this opportunity doesn’t come often.
When asked specifically about his wife, it was nothing but an answer of love. They haven’t seen each other since Christmas, but he told The Sin Bin that she couldn’t be more loving and supportive.

“She was supposed to come up in January, but St. John’s Had that record storm…”

Naturally, I had to ask him if he went shoveling with Growlers forward Todd Skirving. He laughed, then responded:

“I SHOVELED my outside. Todd’s like the Mayor of St. John’s — He’s meeting the people, he was on the weather channel or something. I’m not to that extent, but maybe someday.”

Finally, one of his most notable credits is his parents. Gahagen was quick to cite them coming from Buffalo to Binghamton and back up to Toronto while working full time. The Marlies netminder expressed that goaltending isn’t a cheap position by any means, and his parents were there every step of the way.
Regrettably, he told me he didn’t get screeched in and didn’t kiss the cod (yet).
(PS: Yes, people actually do this. See Auston Matthews.)

“We know this is a big weekend, so it’s nice to get the first one.”