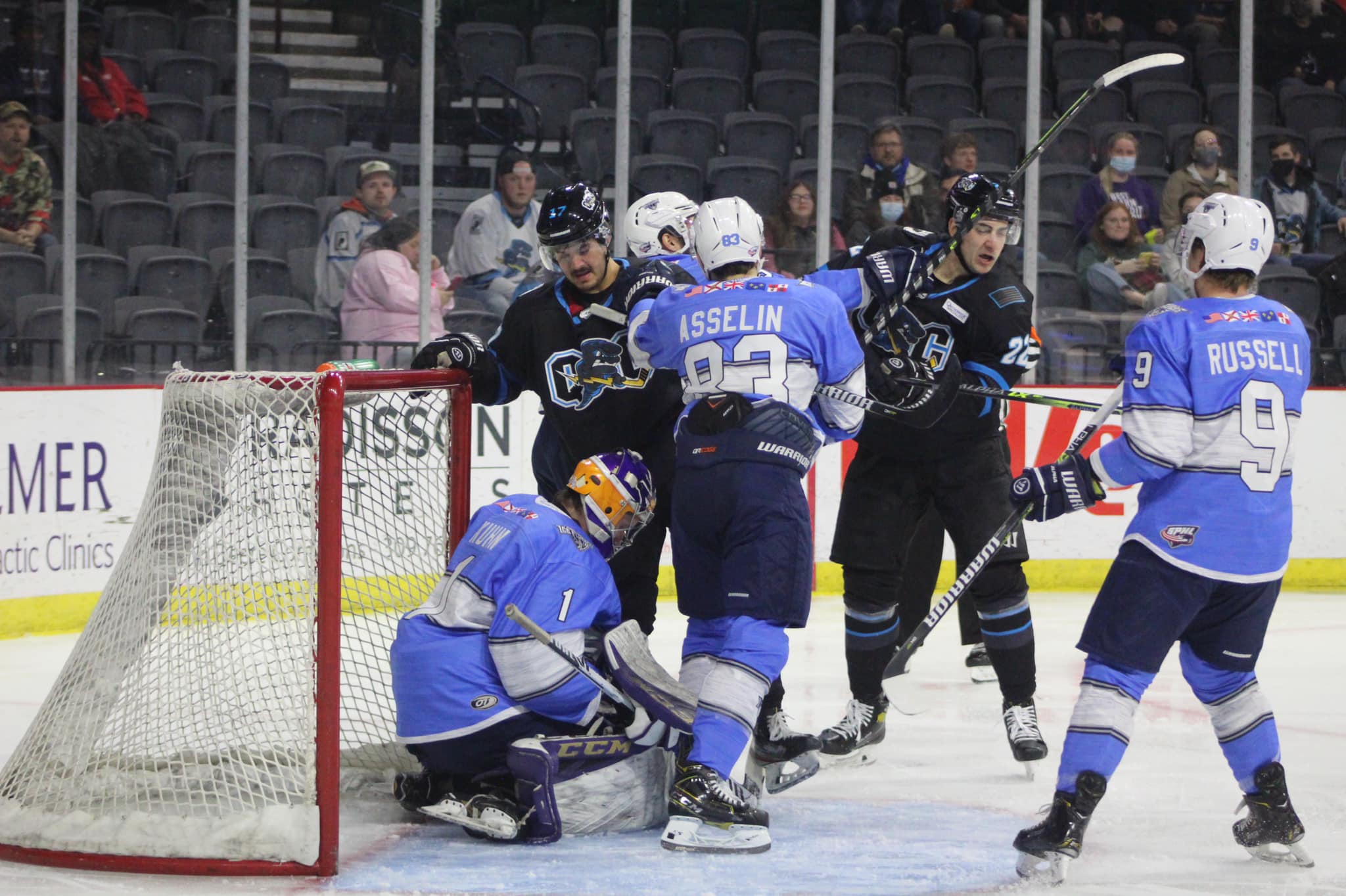 Each team picked up four points on the weekend, as the Storm won Friday’s game in regulation and lost the other games in overtime or a shoot-out

MOLINE, Ill. — The Quad City Storm had a busy weekend, facing off against the Pensacola Ice Flyers three times in less than 72 hours. The Ice Flyers made the long journey up from Florida, being met by the wild Midwestern weather that created the tornadoes which devastated four states. Each team picked up four points on the weekend, as the Storm won Friday’s game in regulation and lost the other games in overtime or a shoot-out. Injuries and call-ups have not been kind to the Storm, as they have lost several players in the past week.

The Storm first lost Carter Shinkaruk to the ECHL’s Iowa Heartlanders before Iowa’s contest on Wednesday, but returned to the Storm for first Friday’s game followed by a quick jaunt to Iowa City and back on Saturday before appearing in Sunday’s matinee game for the Storm. Marcus Ortiz sat out Sunday’s game with a lower-body injury suffered in the waning minutes of Saturday’s game, and is not expected back on the ice until after the Christmas break. Nick Mangone was called up to the ECHL Wheeling Nailers after Friday’s contest, but head coach Dave Pszenyczny was able to sign Storm forward Tommy Stang’s older brother Jack Stang for Saturday and Sunday’s match-ups.

Friday’s contest saw the scoring start quickly, as Pensacola Ice Flyers forward Weiland Parrish lit the lamp only 67 seconds into the game with help from Matt Rupert and Brennan Blaszczak. When Pensacola scored again less than 90 seconds later, it wasn’t looking good for the Storm. They had begun the game back on their heels, but righted the ship and scored three unanswered goals thanks to two powerplay tallies, ending with a 3-2 victory.

“I thought we had a good first shift, opening shift. After that, kind of tailed off and fell asleep … It was good from the second period on. We did what we needed to do. We scored when we needed to score on the powerplay. We were winning face-offs, competing…,” said coach Pszenyczny after Friday’s match-up.

The physicality that the Storm had begun to show this season was there for Friday’s game but did not continue through the weekend. The Illinois-based team did manage to stay out of the penalty box, for the most part, taking only nine penalties total this weekend. Saturday and Sunday’s games could have done with more physicality and perhaps another penalty or two, but that wasn’t in the cards.

Saturday was 80’s night, but there was nothing akin to the 80’s dynasties of Edmonton or the Islanders. The Storm had several scoring chances throughout the game, but couldn’t complete a comeback after giving the lead up twice. While they were able to tie the game to send it to extra hockey, it wasn’t enough. Griff Jeszka and Taylor Pryce both went on hattrick watch during the course of Saturday’s contest, but neither were able to go all the way. Pryce’s second goal tied the game late in the third, but not without a little controversy. The officials at first thought it was not a goal, though the goal judge did flash the red light and the Storm began to celebrate it. The debate was short-lived, however, and the score became tied to eventually send the contest to extra hockey. The game shouldn’t have gone to overtime, however, as goaltender Peter Di Salvo allowed two easy goals. It’s possible that Pensacola would’ve won anyways and the goals weren’t the reason the Storm lost, but they certainly made it more difficult and led to the 4-3 overtime loss for the Storm. The physicality wasn’t there either.

“I think we’ve got to be more physical,” said Pszenyczny on Saturday. “I think that’s our bread and butter. I think we’ve been kind of getting away from it.”

Sunday’s contest was a game for the books, as it went to a shoot-out with a score of 0-0. Both Thomas Proudlock and Cody Karpinski earned shut-outs, but Karpinski was the one to take the victory. The teams were both tired, as it had only been 16 hours since the end of Saturday’s contest. Marcus Russell scored the shootout, and game-winning goal.

“Just one of your typical Sunday games, right? Felt both teams were a little tired. Not much going on. Still two points up for grabs, right? Proudlock played pretty well, came up with the saves when we needed it, kept us in it. After that, it was kind of throwing the puck back and forth like ping pong between two teams,” said Pszenyczny Sunday afternoon.

The Storm will return to action on Friday, facing the Peoria Rivermen at the TaxSlayer Center. Be sure to follow @FPHStorm on Twitter for the latest news and in-game updates about the Quad City Storm.