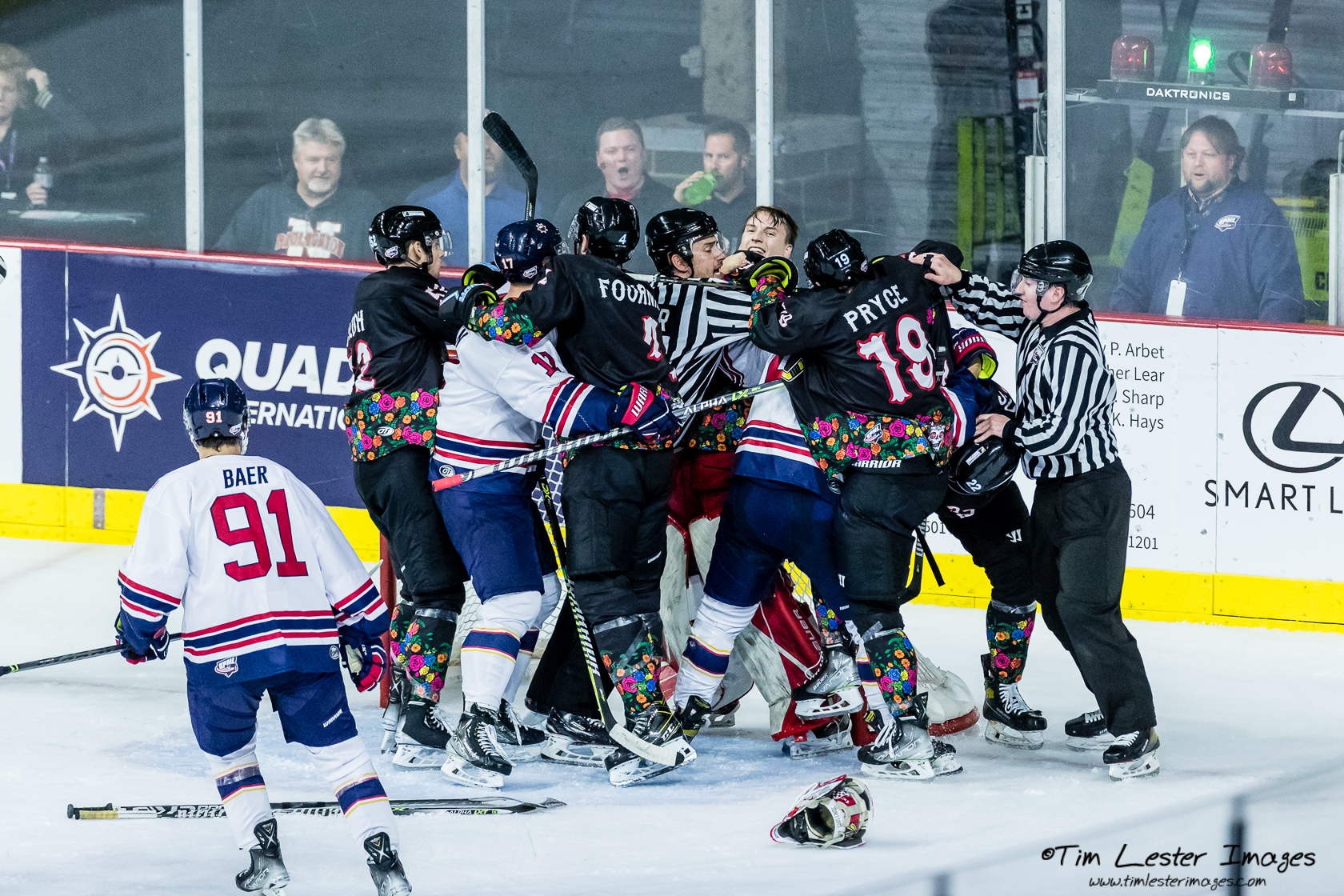 A familiar face returned for the Quad City Storm Friday night, though his presence wasn’t enough to propel his team to victory.

MOLINE, Ill. – The Quad City Storm were shut out for the first time this season in their first home loss of the year. The visiting Peoria Rivermen took the first two points of the weekend in a 1-0 game that saw 95 penalty minutes doled out, 63 of which were handed out at the end of the first period. A familiar face returned for the Storm, though his presence wasn’t enough to propel his team to victory.

Shane Bennett returned to the Storm after a brief hiatus, re-signing on November 3rd.

“Well we needed a body, so somebody was going to fulfill it, and obviously with the familiarity with him, he wanted to jump at it. So it was good for us,” said Storm head coach Dave Pszenyczny on Friday.

The Rivermen scored the lone goal of the game early in the first period just over five minutes into the game, as Tyler Barrow found Cayden Cahill, who went bar down to give the defending champs a 1-0 lead. There was plenty of action the rest of the time, even if the lamp didn’t light again behind either goaltender. Bailey Brkin shined in the net after being returned from the ECHL Iowa Heartlanders earlier in the week, making 35 saves on the night. Many of those saves were highlight reel worthy, as they came under heavy pressure.

At the end of the first period, Brkin also showed he was a scrapper, as he became briefly involved in the post-horn scrum that occurred in his crease. Though the period had ended, Storm captain Taylor Pryce defended his goaltender and dropped the gloves with Hank Sorensen, who had been guilty of spearing. Both Pryce and Sorensen were ejected from the game for fighting after the horn, though Sorensen earned himself another game misconduct for taking his helmet off to fight.

The Storm began the second period with a five-minute power play, but was unable to capitalize on the extended man advantage. The power play unit looked weak, not getting many scoring chances for the duration of the game. The passing was subpar throughout the game as well, not as crisp as in previous games this season, whether on the man advantage or at even strength.

“Well, I think with the way we played, we only lose one-nothing, that kind of tells you something, right? So unfortunately we decided not to show up tonight. There was no urgency, there was nothing, power play was lackadaisical at best. Yeah, all around it wasn’t a good game,” said Pszenyczny.

Neither team accomplished much in the third period, though the Storm did manage to nearly double their shots on goal to 24 by the end of the night after beginning the final frame with only 13 shots on goal in the previous two periods. Though head coach Pszenyczny pulled Brkin late in the game for the extra attacker in an attempt to force overtime, the effort proved futile.

“To lose one-nothing to that team with the effort we put in today, we’re still a good team, right? We just need a little bit more. But the good news is we got them tomorrow, so we gotta rebound back,” said Pszenyczny.

Rivermen goaltender Eric Levine collected his 14th shutout in the SPHL, giving him the most in league history.

Be sure to follow @FPHStorm for the latest news and game updates throughout the season and beyond.