Race for the Kelly Cup Playoffs

WICHITA, Kan. – Welcome to our daily breakdown of the race to the 2020 Kelly Cup Playoffs! Each game day for the remainder of the ECHL season, we will have an analysis of how the races stack up.
For those new to hockey, a team clinches a playoff spot when their points total surpasses the possible points total (or equals it if they have already clinched the ROW tiebreaker) of the team with the highest possible total outside the playoff picture.
Today’s four-game ECHL schedule is North-loaded, so let’s get started.

Here’s the ECHL’s breakdown of the standings at the start of the day: 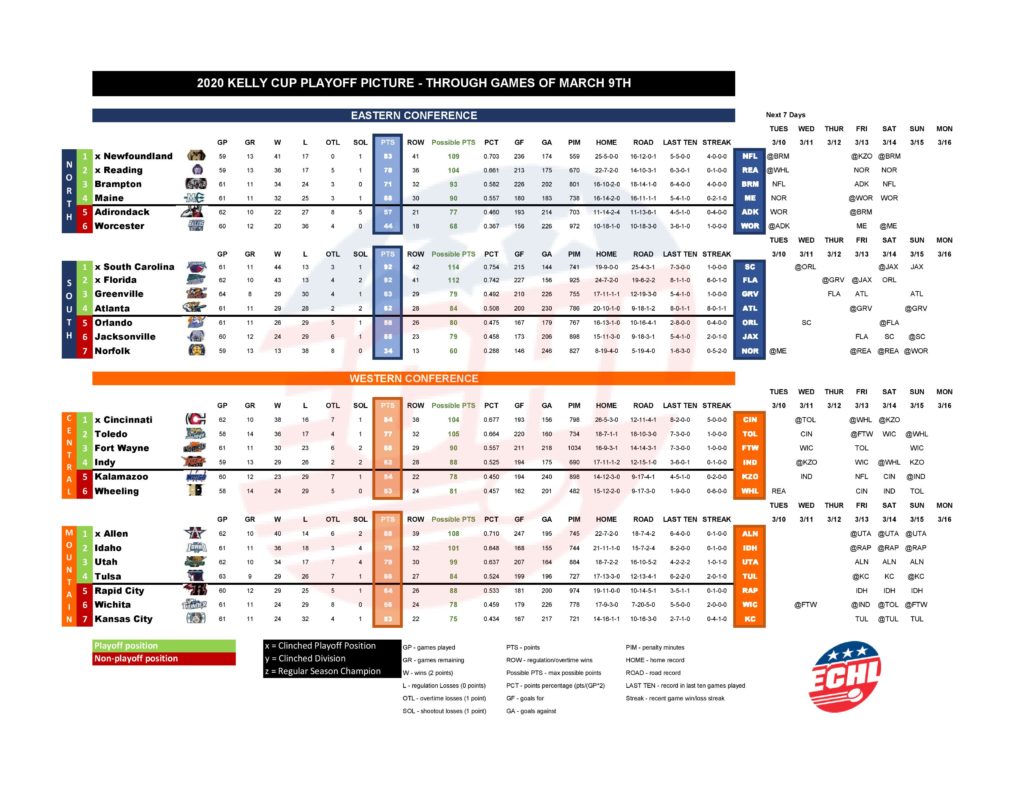 Here’s what the Kelly Cup Playoff bracket looks like at the start of play today: South Carolina was the first ECHL team to clinch a playoff berth on February 23, thanks to a 6-5 win in Worcester. As we have seen in the last several years, clinching first does not equate to a deep playoff run, with only two teams making it to the Kelly Cup Finals:

Race for the Brabham Cup

The race for the Brabham Cup, and home-ice throughout the 2020 Kelly Cup Playoffs, is a three-horse race between the South Carolina Stingrays, Florida Everblades, and Allen Americans, who are separated by four points in the standings (South Carolina and Florida 92 pts each, Allen 88).
If you’re handicapping this race, South Carolina has a game-in-hand on both the Everblades and Americans.
Looking back to 2006-07, the winners of the Brabham Cup have gone on to win the Kelly Cup three times.

Stay with The Sin Bin as we cover the race for the 2020 Kelly Cup Playoffs!