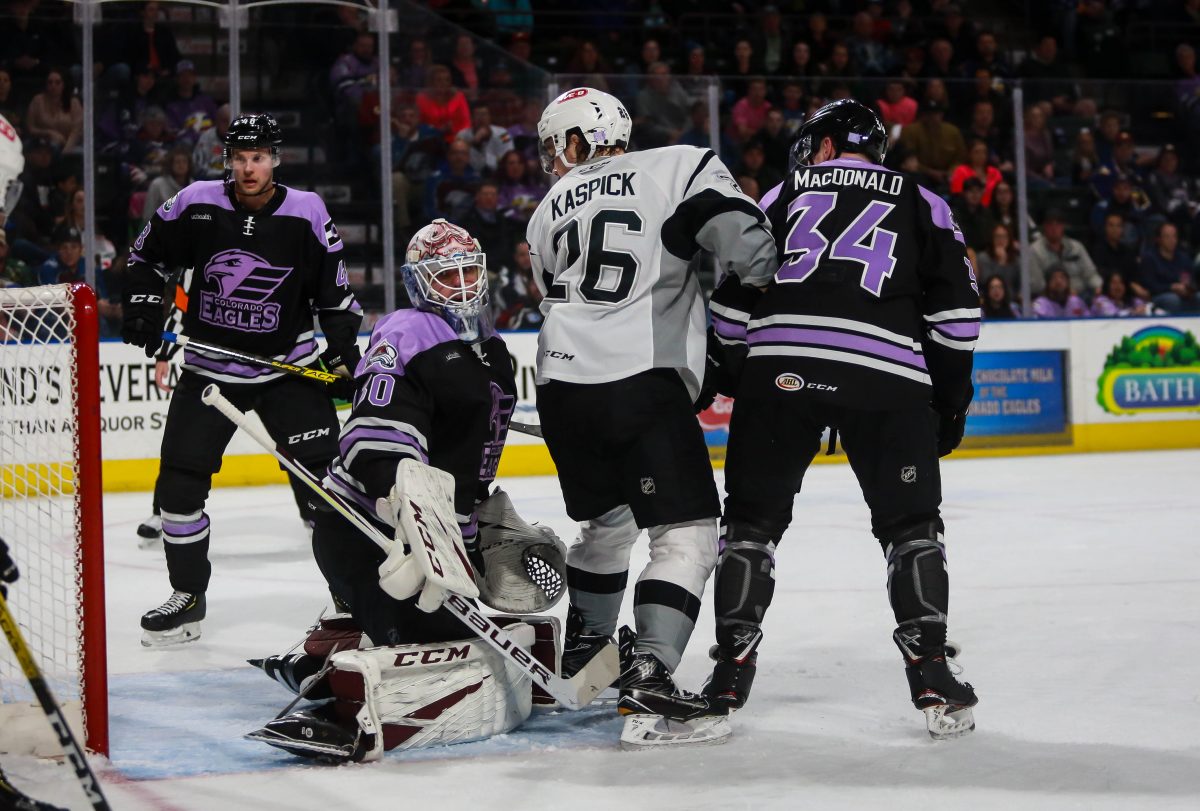 LOVELAND, Colo. – For their last game before the AHL All-Star break, the Colorado Eagles had their second meeting in as many nights against the San Antonio Rampage on Saturday.

LOVELAND, Colo. – For their last game before the AHL All-Star break, the Colorado Eagles had their second meeting in as many nights against the San Antonio Rampage on Saturday. With the Eagles wrapping up their Hockey Fights Cancer weekend, earning a potential sweep over the Rampage would be extra sweet for the 5,289 fans in attendance at the Budweiser Events Center. However, with Colorado earning a 5-1 victory on Friday night, San Antonio would no doubt be looking to avoid a Friday-Saturday sweep and their eighth loss in the last ten games.
ARVE Error: No oembed src detected

The first period was a penalty-filled affair, with six total minors called (four for San Antonio, two for Colorado). While the Rampage began the period with an offensive push, the Eagles held an 8-3 shot lead halfway through the frame. San Antonio came back to edge ahead of the Eagles on shots, but it was Colorado that would strike with the game’s first goal.
After two Rampage penalties in the final two minutes of play, the Eagles found themselves with a 5-on-3 with 18 seconds left in the first. That was when 2020 All-Star T.J. Tynan set up rookie defenseman Jacon MacDonald with a one-timer on the left wing for a blast and a power play goal at 19:54 of period number one. Colorado easily took a 1-0 lead into the first intermission
San Antonio did not let the Eagles goal damper their gumption coming out of the locker room for the second segment of play. Just one minute and seven seconds in, the Rampage delivered on a short-handed goal from right winger Austin Poganski to tie the game at 1-1. Colorado decided to return the special teams favor shortly after, as an initial shot from forward Martin Kaut was deflected in by A.J. Greer, giving the Eagles their second power play tally of the night and a 2-1 lead.
Just under seven minutes later, Colorado found themselves at a disadvantage with a delayed penalty deep in San Antonio territory. The Rampage seized the 6-on-5 chance, with Mitch Reinke setting up left winger Nathan Walker for a one-timer that blew by Eagles netminder Adam Werner at 8:24 of the second. After 40 minutes, both teams were knotted at two goals apiece.
The third and final frame showcased a combination of Colorado failing to finish and San Antonio grabbing the reins with gusto. The Eagles mustered seven shots on net and yielded no scoring results, while the Rampage’s nine shots on goal had two pucks successfully find the back of the net. The first tally of the third period came when defenseman Joey LaLeggia blew down the right side into the Colorado zone. After leaving two defenders in the dust, he went backhand to forehand in front of Werner for the game-winning goal at 8:24 of period three.
The second San Antonio score of the third occurred when the Eagles were frantically trying to get the puck into the neutral zone so Werner could go off for an extra attacker. Colorado then turned the puck over right at their blue line, as forward Jordan Nolan picked the defender’s pocket before skating in and wristing a shot through traffic to seal the Eagles fate at 18:59 of the third. Werner never got to the bench for the extra man, as the Rampage earned their first ever victory over Colorado by a score of 4-2.

Colorado d-man Jacob MacDonald scored his ninth goal of the season Saturday night, tying for first in goals amongst league defensemen with San Diego’s Chris Wideman. MacDonald is also fifth among league d-men with 28 points. With 40 games played thus far this season, MacDonald is on track to score 15 goals for the Eagles this year (he tallied 14 goals for Springfield in 2018-19).
Follow C.C. on Twitter for live, in-game coverage and various news & notes on the Colorado Eagles! Don’t forget to also follow The Sin Bin on Twitter and Facebook for all additional AHL, ECHL, and SPHL minor league hockey news and insights!