WICHITA, Kan. – The Wichita Thunder have added a good assortment to their 2019-’20 team after signing Stefan Fournier last week as well as Spencer Dorowicz, Michael Ederer and Luke Shiplo today.

WICHITA, Kan. – The Wichita Thunder have added a good assortment to their 2019-20 team after signing Stefan Fournier last week as well as Spencer Dorowicz, Michael Ederer and Luke Shiplo on Wednesday.
For many Thunder fans, Fournier sparks a good memory, scoring the sole home hat trick in last season’s home finale against Allen. For others, his physicality is remembered as his hits and strength often played in the Thunder’s favor during his time in Wichita. Fournier joined Wichita in November and recorded 29 points (17 goals, 12 assists) in 38 games with the Thunder. He has also been specified as a player/assistant coach, a good sign for the relationship between Fournier and Wichita Thunder head coach Bruce Ramsay.

“He has a wealth of experience playing in the AHL and made a great impression when he joined the team this past season, on and off the ice,” Ramsey said. “I plan on using him in all kinds of situations and leaning on him as we build the team the for the coming season.” 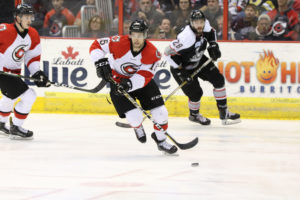 Dorowicz is developing into a well-rounded ECHL player. He logged 31 games with the red-hot Cincinnati Cyclones last season, putting 13 points (7 goals, 6 assists) in the stat book. He added one assist to his numbers in the Kelly Cup playoffs. The left-handed forward spent eight games with the Greenville Swamp Rabbits during the 2017-’18 season as well. 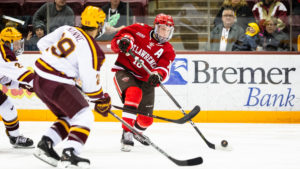 Ederer is a young winger coming off four solid years with St. Lawrence University in Canton, NY. He recorded 14 points (6 goals, 8 assists) in his senior year in 34 games. In 2013-14, he excelled in the Ontario Junior Hockey League and showed that long season stamina would not be a problem (played in 53 games, averaging a point a game).

Shiplo, a defenseman fresh out of Quinnipiac University rounds out the latest signings for Wichita. His career resume looks good, with a national title in his freshman year. His senior year minutes were quality depth minutes, scoring three goals and dishing out two assists in his 31 games. Shiplo should grow nicely if the Thunder can bring some strong first-pair defenseman to lead.

“All three players had really good junior careers,” Ramsay said of the signings. “I’m really excited to get all three into camp. As we continue to add pieces to the puzzle, we hope they add to the relentless pace and work ethic that we will bring each and every night.”

Teams across the ECHL will continue signing players throughout the coming weeks, stay up-to-date on all of them with our 2019 ECHL Transactions page!