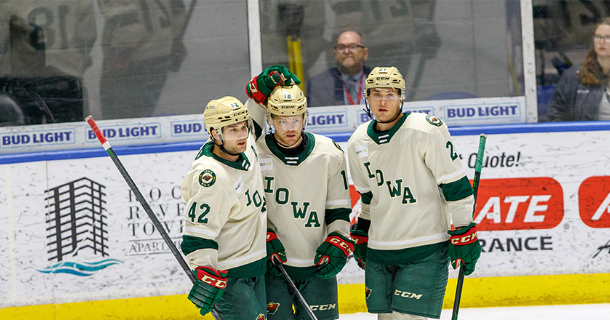 ROCKFORD, Ill. – Kyle Rau scored two goals on Sunday afternoon to become the all-time Iowa Wild leader in points. But, more importantly, his two goals helped to lead Iowa to a 5-3 victory over the Rockford IceHogs, keeping the team’s playoff hopes alive. Mason Shaw had a goal and an assist and Zane McIntyre earned the victory, stopping 36 shots.

This contest got off to a great start for Iowa, as two power-play goals helped staked the team to a 2-0 lead a little under 11 minutes into the contest. Shaw opened the scoring with his 19th goal of the season at the 5:16 mark. Calen Addison fired a shot from the point of that Shaw deflected past Rockford netminder Arvid Soderblom to make it 1-0.

A little over five minutes later the Wild were back on the board. Defenseman Dakota Mermis made a great feed into the slot to Nick Swaney, who corralled the pass before turning and firing a wrist shot that beat the IceHogs netminder over the shoulder. That was the 16th goal of the season for Swaney, extending his team’s lead to two.

Iowa looked like they were in command of this game, but Andrei Altybarmakian cut the deficit in half, scoring nine seconds after the Swaney goal. Nicolas Beaudin moved the puck back to the point to Altybarmakian, who lifted a wrist shot that found its way through traffic and past McIntyre to make it 2-1.

The IceHogs were trailing by a goal despite the fact that they had outshot Iowa 16-15 in the first frame. However, the team came out of the second and tied the score when Cameron Morrison netted his fourth goal of the season a little after the five-minute mark. Wyatt Kalynuk took a shot that McIntyre saved, but Morrison gathered to rebound before putting the puck in to tie the score at two.

The Wild added their third power-play goal of the game at 16:15 when Mitchell Chaffee netted his 23rd tally of the season. Chaffee took a shot from the right face-off circle that deflected off a Rockford player and in to make it 3-2.

Once again, Rockford would rally to tie the score when Mike Hardman scored his 19th goal of the season at 5:12 of the third. This time it would be the IceHogs taking advantage of their only power-play opportunity of the contest. Hardman took a shot in the slot that McIntyre saved, but he gathered his own rebound and was able to put it past the Wild netminder to tie the score at three.

Iowa desperately needed this game if they were going to keep their playoff hopes alive, and Rau delivered for them, scoring his 24th goal of the season at the 9:27 mark of the period. Bryce Gervais made a perfect feed onto the stick of Rau, sending him in on Soderblom on a partial breakaway. As he approached the goaltender, he was able to lift the puck past the blocker to put Iowa on top for good, 4-3.

With 50 seconds left in the contest, Rau netted his second goal of the night, scoring an empty-net goal to give him a team-leading 25. The goal was also the 199th point of his career, setting a franchise record.

The victory moved the Wild to 32-30-9, one point, and seven one-thousandths of a percentage point (.521 vs. .514) behind the Texas Stars (31-28-12) for the fifth and final playoff spot in the Central Division standings. Iowa will wait to see what happens on Tuesday when Texas takes on Manitoba. Should the Stars win that game, Iowa will be eliminated. If Texas loses, then Iowa still has a chance of reaching the playoffs as the fifth seed.