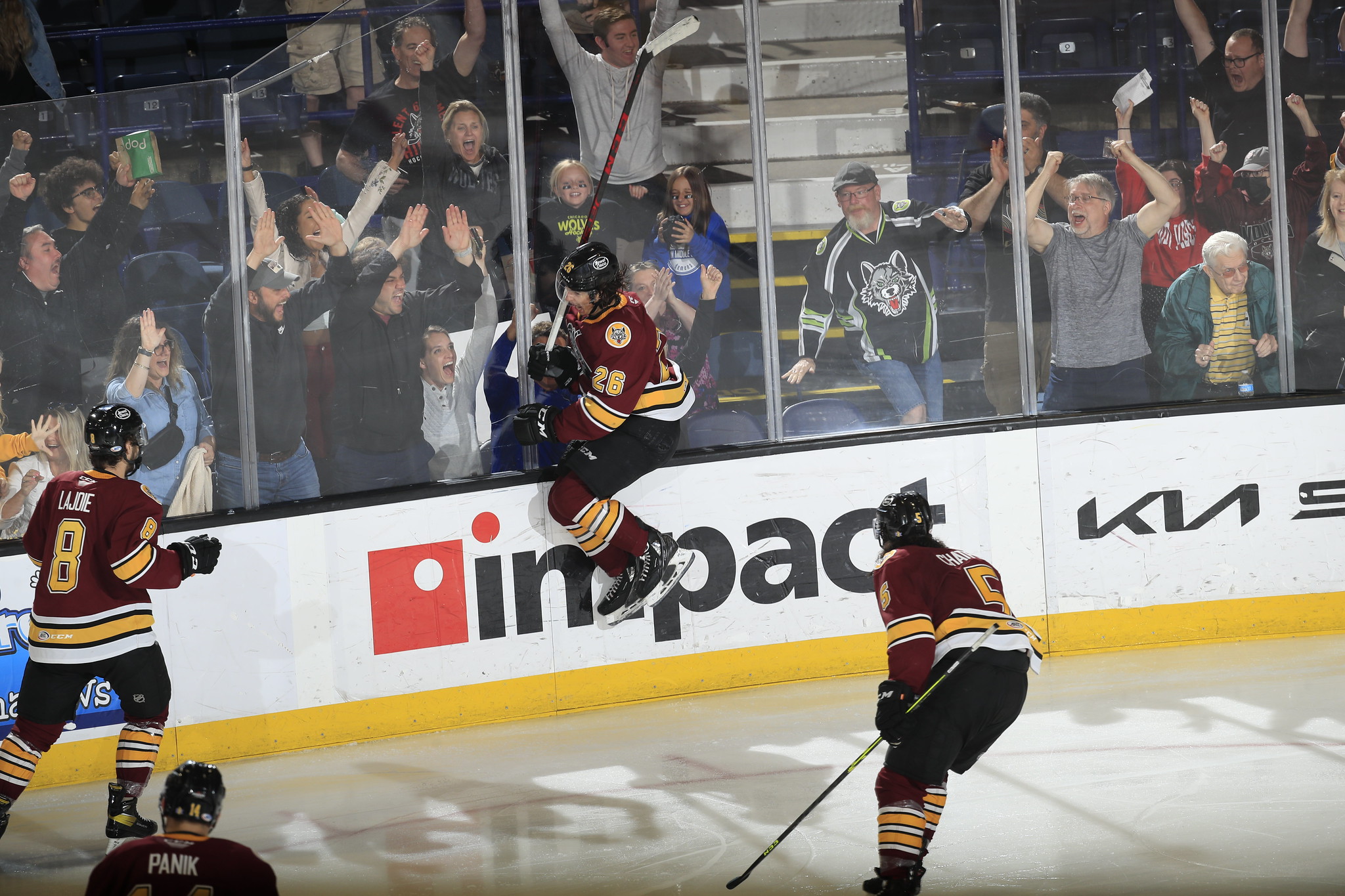 Rosemont, Ill. – The anticipation was palpable heading into Friday night’s contest between the Chicago Wolves and the Stockton Heat. Both teams held strangleholds on their respective divisions since January during the regular season, and both teams romped through their divisional brackets in seven games each to advance to the Western Conference Finals. As the top two teams in the AHL, the stage was set for an all-time classic of a series that was to begin in Allstate Arena, with Chicago stealing the #1 seed away from Stockton on the last day of the regular season.

In the seven years in Stockton, the Heat had never met the Wolves in any game action before Friday night. It was going to be a matter of who could size up the other side and take advantage of whatever inch was given from two rosters deep in every position on the ice.

In the end, it was Chicago that found a way to come out of this wild affair with an overtime win that completely filled the billing of a heavyweight match to take a 1-0 series lead in this Western Conference Final.

As expected, both teams really took the time to feel each other out initially with absolutely zero in-game experience against the other side. At the end of a penalty kill, an effort shift from Josh Leivo drew a tripping call and the Wolves’ powerplay went to work. After a shot from Joey Keane found its way through traffic, Leivo picked up the rebound and buried it past a sprawling Dustin Wolf for the game’s opening marker.

Early on, the Wolves pushed the pace of play against the Heat, outshooting the visitors 6-0 in the opening half of the period. Stockton, however, would cash in on their first shot as a gritty shift in the offensive zone paid off. Luke Philp put the puck towards the net, which bounced off Keane in front of Alex Lyon and into the net to tie the game 9:11 into the opening frame.

The goal seemed to spark Stockton’s attack, as they got some great looks on net from Justin Kirkland and Juuso Valimaki that were met by Lyon. Two more minor penalties against Chicago allowed the Heat to set up with the man advantage, but the Wolves’ penalty killers were up to task. Despite the slow start, Stockton managed to outshoot Chicago 11-10 in the opening frame, but the score remained tied going into the intermission.

Early on in the middle frame, Stockton wasn’t getting as high of volume chances as they had in the latter half of the first, but they made sure to make their looks count. Walker Duehr was able to get the puck at center ice, speed through and split the Wolves’ defenders before beating Lyon to give the Heat the 2-1 lead just 2:43 into the period. Less than two minutes later, Eetu Tuulola caught Lyon hesitating to play the puck and moving back into the net, banking a tight angle shot off the inside of his pad and into the net to extend the Stockton lead to 3-1.

Chicago had made a habit of climbing out of deficits all year, and even though Stockton had stifled their chances so far, they wouldn’t be able to hold them forever. It took to the halfway mark of the period but Jack Drury stole a breakout pass at center ice and went the other way to Jalen Chatfield, who fired a perfect low shot that beat Wolf and brought the Wolves within one.

Drury gets the play going in the neutral zone and Chatfield with the perfect finish https://t.co/lRX4ZB5XeP pic.twitter.com/lZcnxsSgCE

With renewed vigor, Jamieson Rees drew a tripping call and the momentum started to shift back to the Wolves. Back on the power play, it was Leivo again with his second of the night, beating Wolf just in front of the crease to tie the game at 3-3.

#STKvsCHI | Leivo's second of the night ties it up! Excellent puck movement from the Wolves wear down Stockton's penalty killers for the tying tally pic.twitter.com/wepayCMFsn

The Wolves kept buzzing, piling shots on Wolf all the way to the buzzer, where he was forced to make one last big save before the period ended. Despite outshooting Stockton 17-6 in the second, the Wolves found themselves tied going into the intermission.

The back and forth chances continued, with either side refusing to make that backbreaking mistake until Connor Mackey cleared the puck over the glass for Chicago’s third power play of the evening. Again, Chicago worked the puck around the zone, wearing out Stockton’s defenders for a chance to cash in. As it has been all season long, it was Stefan Noesen on the doorstep to put away the rebound on the Keane shot to restore the Wolves’ lead at 4-3.

#StefNation doing what he does. Chicago's 3-for-3 on the man advantage pic.twitter.com/xdmphLSoH8

That lead would last all of 59 seconds, as Connor Zary got behind the Wolves’ defense where a stretch pass found him and he beat Lyon to knot the game up once again at 4-4.

#STKvsCHI | What a response from Stockton off Noesen's goal. Zary with the finish to tie the game. pic.twitter.com/Xsl8qXo0F4

The intensity continued to build, with chances going back and forth for both sides desperately trying to break the deadlock and assert themselves in this opening game. A flurry of chances with the clock winding down was turned away from Wolf and for the first time this postseason the Wolves found themselves headed to overtime.

It took all of 2:26 of extra time to find a hero – Chatfield sped around the boards in the offensive zone to open up space for Richard Panik, who fired a low shot on net. A collision with Wolf and his defender allowed space for Rees to pick the rebound up and bury the overtime winning goal into the empty cage to seal the Game One victory for the Wolves.

Jamieson Rees the hero of Game One! What a celebration! pic.twitter.com/4QYIjgAceK

Game Two is Monday, June 6 at Allstate Arena at 7 PM CST. The series will then turn to Stockton for a three-game set.