DES MOINES, Iowa – Unfinished business. If you are a fan of mobster movies, you know that this is at the heart of almost every story.

DES MOINES, Iowa – Unfinished business. If you are a fan of mobster movies, you know that this is at the heart of almost every story. Someone has done another wrong. A person has failed to meet his or her obligations. Maybe there is an old beef that has not been settled. Whatever the case, a person is unable to move on in life until they have settled the score and completed the unfinished business. 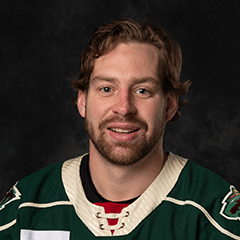 Iowa Wild defenseman Matt Register may not be a mobster, but he still has some unfinished business. No, it is not with a person, although there are some forwards out there who may have a beef or two with him. It actually has nothing to do with settling a score at all.
No, for Matt Register, his unfinished business is with the sport he has played since he was barely old enough to walk. His beef is not to get even with someone who has done him wrong, but to prove that he truly deserves to be playing at the highest level of the game. That is what is driving the Iowa Wild defender.

BECOMING A STUDENT ON THE ICE

Register loved hockey growing up, and it was all he wanted to do with his life. He played other sports in high school, but hockey was his passion.
To help fulfill that dream, Matt spent four years playing junior hockey. His numbers early on were not eye-popping, but he developed a pattern early in his career that became his trademark. The more experience he had in any league, the better he became.
Most athletes struggle in year two or three in a league as opponents learn more about their weaknesses and are able to expose that part of their game. Not Matt Register. He had no goals and 15 assists in his first two seasons combined in juniors, including his first year in the Alberta Junior Hockey League (AJHL). However, by year three, he had turned the tables.
In this second season in the AJHL, Matt scored 14 goals and added 17 assists in 62 games for the Bonnyville Pontiacs. The following season, he set a single-season high with 16 goals and proved to be quite a playmaker, recording 45 assists in 58 games. 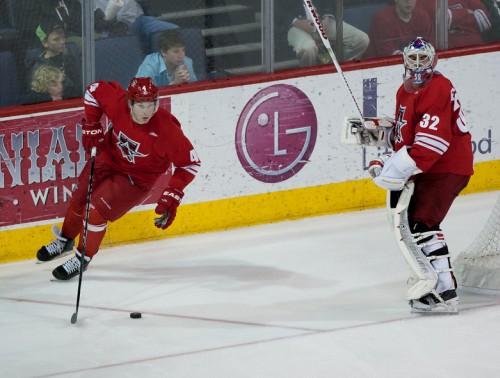 It took him a couple of years, but the defenseman learned. He studied opponents and found weaknesses he could turn into advantages for himself. In essence, he turned himself into an expert on his opponents.

“I always want to learn; I am a student of the game. I listened a lot to older guys and coaches early in my career, trying to learn as much as I could. I was not going to just settle in, but was always looking for ways to improve myself. I really worked hard to be a guy coaches wanted on the ice in the last two minutes — A guy that could score goals, but had good plus/minus numbers. It’s those little things you have to study. I wanted to learn to make myself that much better.”

PROMISES TO KEEP AND MILES TO SKATE BEFORE I SLEEP

After juniors, Matt Register found himself looking for a place to play hockey — college was not an option for him, and he was not drafted. That left him a guy with a desire to live out his dream and no place to do that.

“I was a little bit of a late bloomer. junior hockey was where I really started to have to make some decisions in my life. You know, school kind of really didn’t work out. I had to take kind of a plan B in that direction and was lucky enough to get a call. I started playing at a lower level in pro hockey in the Central Hockey League, then kind of work my way up. I always kind of loved the game, so I kind of just stuck with it and worked hard.”

He decided to join the Sylvan Lake Admirals in the Chinook Hockey League, where he proved his worth, scoring six goals and adding 18 assists in 17 games. That got him a call from the Allen Americans when they were in the Central Hockey League (CHL). Matt reported and finished the season, playing in 22 games and adding five points.

In 2012-13, Matt split time between the Tulsa Oilers and Arizona Sundogs, scoring a combined two goals and 14 assists in 51 games. He caught the attention of the Ontario Reign when they were in the ECHL, and signed to finish out the season there, scoring four goals and 13 points in 17 games.
While the ECHL was clearly the superior league to the CHL, a funny thing occurred for Register: his numbers actually got better facing more challenging competition. The next two seasons he remained in Ontario, scoring 14 goals in each season. He added 30 assists in 2013-14 and tallied 36 the following year. That got him a callup to the AHL’s Chicago Wolves for a brief, six-game audition in his second season.
It was a satisfying turn of events for Matt because he knew he had proven his worth.

“I’ve had to work for everything that I got — I wasn’t drafted, I wasn’t invited to camps. I started out playing in the Central Hockey League and worked my way into the East Coast League. It was the opportunity, and I made most of it and just kind of ran with it”

While it may seem ironic to some that Matt’s numbers greatly improved in the ECHL, it is not surprising to the defenseman at all. It was all about opportunity and he took full advantage.

“It was difficult to bounce around two, three times a year. I was getting upset at myself. I wanted to play and I had people say, ‘You can play, you can play this game.’ I think the confidence started come for me by the time I was in the East Coast League where I got more and more of an opportunity to showcase my talent, my shot, power play, and just kind of really settle into a role.” 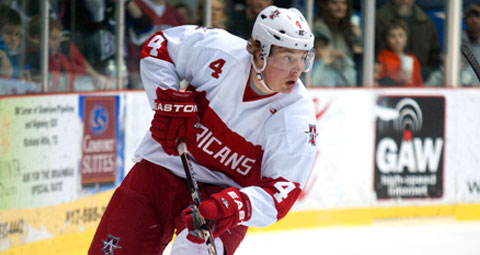 It also game him the opportunity to work on different parts of his game, to once again be a student and learn to be a more complete player.

“I was more known of an offensive guy, and I had to work hard to be a real solid two-way player. I focused on my defensive game. There was a point, a year where I just wanted to focus on being more solid defensively. Points still come, but the plus/minus column was what I wanted to improve.”

Matt spent the 2015-16 season splitting time between the Allen Americans and the Atlanta Gladiators, but 2016-17 became a very special year for the defenseman. He was signed by the Colorado Eagles (before they joined the AHL), and became an integral part of a two-time Kelly Cup Championship team.
In his first season with Colorado, Matt played in all 72 games, scoring 18 goals and adding 46 assists. He played in all 72 games the following year as well, netting 17 goals while increasing his assists to 48. In the playoffs, he was equally as dangerous, scoring 24 points (including eight goals) in the first championship run, while adding 20 points the second year. 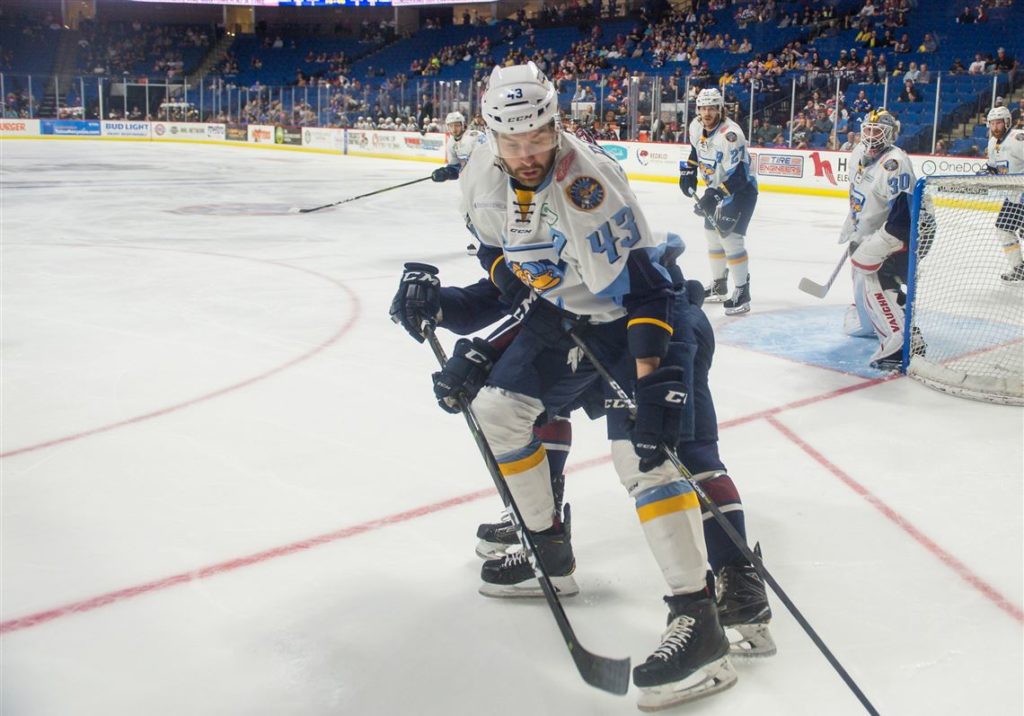 What was most pleasing to the defenseman was that he had successfully turned around his game in one key area: plus/minus rating. His final season in the CHL, Matt had a minus-21 rating, but posted a plus-17 or better in four of the next five seasons, including a plus-21 in his first year with the Eagles.
He had put himself to the test and had come up with straight “A’s” in his quest to become a complete player. It was made even more special by the fact that his teammates recognized it as well.

“There was a point where guys would count on me. Big players make big plays at that time of the year, and my teammates knew they could count on me to make big plays. I don’t know, maybe it was luck — some luck — but I really worked hard and I wanted to be the guy in big situations. [the coaches] had a lot of confidence in me and wanted me to come in and be a leader and be a part of helping turn that organization around.”

FINALLY GETTING A REAL AUDITION

Last season, Matt Register joined the Toledo Walleye where he helped the team reach the Kelly Cup Final. Matt produced 19 points in 24 playoff games and added a plus-6 rating during the run. He also appeared in five games for the AHL’s Hartford Wolf Pack, his second stint in the league.
The defenseman had been so close to seeing his NHL dream come true, but he had never been given much of an opportunity to stay at the AHL level — that is, until this season. Matt rejoined Allen before the year began, but was immediately called up by Iowa Wild Head Coach Tim Army and has remained since.
He only has one goal to this point, but has produced solid minutes and is on the positive side of his plus/minus rating. He is making a contribution for a team with championship aspirations, and that is what matters most.

“I’ve been up and down and scratched and it never felt good. I mean, oh man, I can’t tell you how good it feels to be given this opportunity. But you know what, I am glad to contribute a little bit. It is great to be here, but I got some unfinished business.”

Ah, there is that term. It may be exciting to finally get regular shifts at the second highest level in the sport, but that is only making Matt all the more hungry to be at the top. After all, he has a beef to settle with the sport he so dearly loves.

He may have unfinished business, but that doesn’t mean he can’t enjoy the battle a little. After all, this is the sport Matt loves.

A TRIP TO THE TOP?

Matt Register does look like he is enjoying himself. The offensive numbers are not there yet, but they will come. This student of the game will learn this league, finding weaknesses to expose and, before long, he will be the guy Coach Army depends upon in those final minutes of games.
For now, he is just working hard every night, creating opportunities to move to the next level. Matt has truly created a Cinderella Story that still has one more chapter write.
This is not a love story, exactly. Matt truly does love playing hockey, but this is a story about making things right. A tale about putting his universe in order. No, the Iowa Wild defenseman is not Don Corleone, but he has a beef. Things will not be right in the world of Matt Register until he has handled some unfinished business.
Follow Robert on Twitter for all the latest Iowa Wild news, notes, and feature stories. Don’t forget to give a “like” to The Sin Bin on Facebook for the rest of the AHL, ECHL, and SPHL minor league hockey coverage!