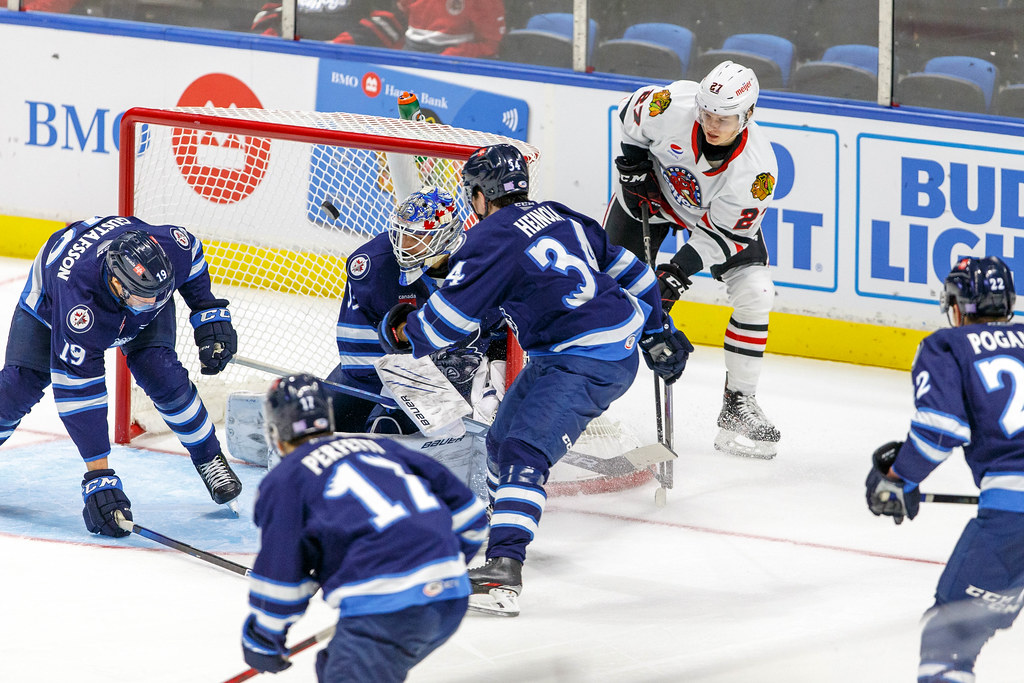 Lukas Reichel, the Chicago Blackhawks first-round pick in the 2020 NHL Draft, is getting the hang of North American hockey

ROCKFORD, Ill.– Lukas Reichel, the Chicago Blackhawks first-round pick in the 2020 NHL Draft, is getting the hang of North American hockey. His speed and scoring ability were on full display Sunday afternoon at the BMO Harris Bank Center.

Reichel’s hat trick led the Rockford IceHogs to a 4-3 victory over Manitoba in his eighth AHL contest.  The rookie forward scored in each period of action, including the eventual game-winner.

“I’m normally not a goal-scorer; I’m more like the passer,” Reichel admitted to the media following the game, “but I like to score goals.”

Despite being outplayed for the bulk of the first period, Rockford took a two-goal lead into the intermission. The Hogs got a great individual effort from Reichel to draw first blood.

Reichel took a clearing pass out of the Rockford zone from Josiah Slavin and headed down the right side. He was separated from the puck in the corner, but regained possession after Brett Connolly knocked it behind the Manitoba net. Reichel calmly banked a shot off of Moose goalie Arvid Holm and into the net at the 11:08 mark for a 1-0 Hogs advantage.

Four minutes later, Holm left a rebound of Ryan Stanton‘s shot in front of the crease. Rockford captain Garrett Mitchell pounced on the loose puck, skated to the right post, and flipped it over Holm for a 2-0 IceHogs lead at 15:10 of the first.

The action was back and forth in the second, with both teams getting some chances. The Moose killed off 53 seconds of 5-on-3 time early in the period; Hogs goalie Malcolm Subban stopped a lot of shots at close quarters.

The IceHogs broke through late in the period when Slavin cleared the puck into the neutral zone. Reichel won a race to the puck as it approached the Manitoba blueline, turned on the after-burners, and went high on Holm to unite rubber and twine. The goal came 19:02 of the second period and Rockford skated to the locker room up 3-0.

Manitoba broke up Subban’s shutout bid early in the final frame. Jeff Melott got position in front of the net and sent a feed from Cole Perfetti into the cage 3:28 into the third. Moments later, Reichel completed the hat trick with his prettiest goal of the night.

Nicolas Beaudin got things started, breaking up a Manitoba entry attempt at the Hogs blueline. Reichel retrieved the loose puck, stickhandled between the legs of Moose defenseman Declan Chisholm, and drove to the net. The backhand attempt was over the glove of Holm, giving Rockford a 4-1 cushion at 4:46 of the third period.

Despite winding down their third game in as many nights, there was no quit in the Moose. Manitoba countered with a Ville Heinola goal at the 6:04 mark to cut the lead to 4-2. They pulled Holm late and scored with 20 seconds remaining on Evan Polei‘s first of the season. However, Beaudin snuffed out the comeback by clearing a rebound in front of Subban with seconds to play.