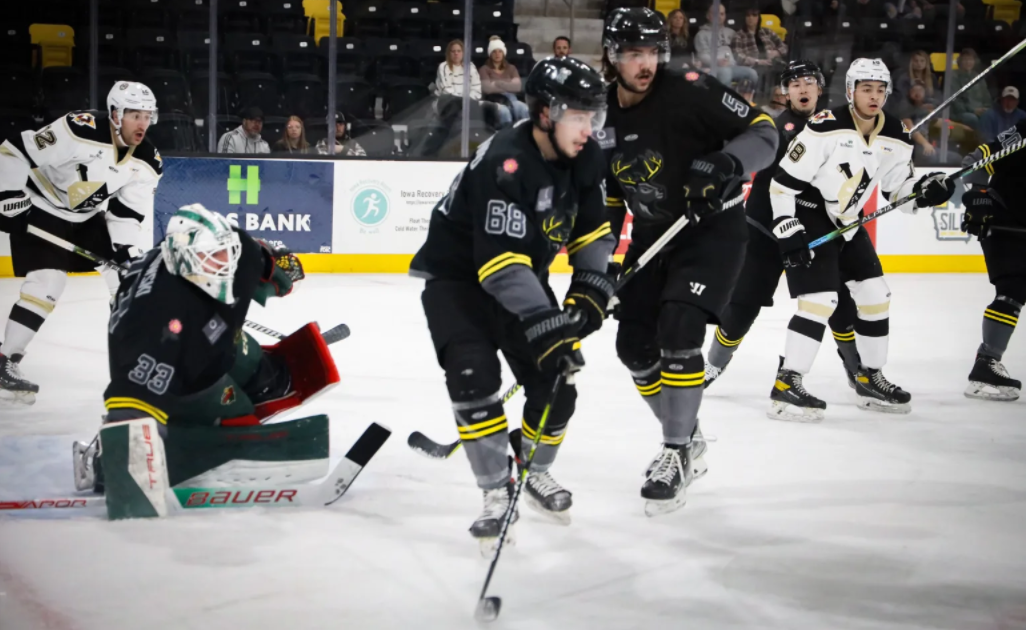 The day after Thanksgiving is not all about shopping and sales. There was great hockey as well

CORALVILLE, Iowa – The day after Thanksgiving is not all about shopping and sales. There was great hockey as well, and the Wheeling Nailers made it special in other ways, scoring three power-play goals to help lead them to a 7-4 victory over the Iowa Heartlanders. Will Reilly led the way, scoring two goals and adding an assist. The Heartlanders produced two goals with the man advantage, and Bryce Misley scored a goal and added two assists.

The Nailers took the lead halfway through the first period, scoring their first power-play goal of the game. Justin Almeida and Dylan MacPherson were moving the puck back-and-forth along the left boards before Almeida moved in just above the left faceoff circle, firing a wrist shot that beat Iowa netminder Trevin Kozlowski over the shoulder for his fourth goal of the season.

Just over five minutes later, Wheeling scored their second power-play goal of the game. Cam Hausinger carried the puck into the Iowa end along the left boards. He looked like he was going to move in on the net, then made a drop pass to Reilly, who blasted a shot by Kozlowski for his first goal of the season.

The Nailers held the 2-0 lead through the first intermission, but the Heartlanders came out of the break and put the pressure on right away. That helped the team tie the score less than a minute in the second period, scoring 12 seconds apart to set a franchise record for quickest two goals to start a period.

Just 12 seconds later, the Heartlanders tied the score on a similar setup. This time Misley dished the puck to Khonanov at the right faceoff circle who fired another wrist shot that beat D’Orio to the far post for his second goal of the year.

Iowa was right back in the game, but Wheeling would take the lead a little over two minutes later and would take command of this game, scoring four straight goals. The first came at 2:55 on a great tic-tac-toe play. Patrick Watling passed the puck to Almeida, who made a one-touch pass across to Nick Hutchinson, who teed up and blasted a one-timer by the Heartlanders netminder to put Wheeling ahead, 3-2.

Roughly two-and-a-half minutes later, the Nailers extended their lead to two. Alex Stevens passed the puck to Tim Doherty at the right faceoff circle, who fired a wrist shot by Kozlowski for his second goal of the season.

Despite giving up the two early goals, the Nailers completely dominated the second period, outshooting Iowa, 8-3. That gave them a 20-11 shot advantage through the first two periods, which continued into the third, as Wheeling outshot Iowa, 11-5. That helped the team produced two more goals in the first six minutes of the frame.

The first came at 3:30. Reilly carried the puck down the right-side boards, then swept past an Iowa defender before lifting a backhander past Kozlowski for his second goal of the evening. At 6:03, the lead became four when Almeida scored his second goal of the game, firing a wrist shot that went just under the crossbar to give Wheeling a 6-2 lead.

The Heartlanders were not giving up however, cutting the deficit to two. The first came at 13:28 with Iowa on the power-play. Misley intercepted a bad clearing pass and wristed a shot that beat D’Orio for his fifth goal of the year.

With a little under two minutes left in the game, Yuki Miura netted his second tally of the year. Kris Bennett made a great pass to Miura cruising down the slow, who put the puck just inside the left post to make it a 6-4 game.

The Heartlanders pulled Kozlowski with a little over a minute left in the game, but Jared Cockrell secured the victory with an empty-net tally with 26 seconds left to give Wheeling the 7-4 victory.

Hausinger had three assists for Wheeling. Almeida also had two goals and an assist. Hutchinson had a goal and an assist. For Iowa, Khovanov finished with two goals, the first of the season for the former third round pick. Bennett had two assists, giving him 17 points in 10 games with the team.

These two teams will go at it again tonight. The puck drops at Xtream Arena at 7:00.