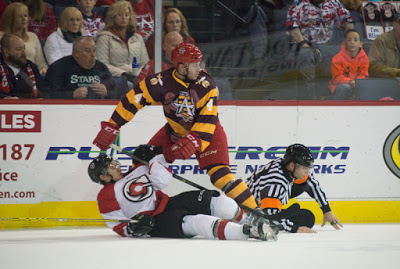 I returned from my bike ride this morning to find out that long time Allen Americans photographer, Kimberly Sauer, lost her long and courageous battle with cancer last night. 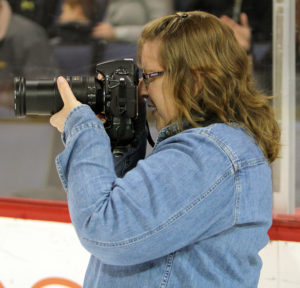 ALLEN, Texas – I returned from my bike ride this morning to find out that long time Allen Americans photographer, Kimberly Sauer, lost her long and courageous battle with cancer last night.
If you have been associated with the Americans for any length of time, you know Kimberly personally and many others remember her from her spot on the Allen bench, complete with a red Allen Americans hockey helmet, taking photos of game action. It was her faith, spirit, kindness, positive attitude, and smile that will always be remembered by those that were lucky enough to know her.
I first met Kimberly and her husband Nathan (they were truly a team) when I started writing back in 2012. They were kind enough to approach me and ask if I would like to use Kimberly’s photos in the articles. That started a long and wonderful relationship. I get up at 4:00 am to write and typically on game nights Kimberly and Nathan would be up until 1:00 or 2:00 am editing games photos to send to me for my game recap.
Here is Kimberly’s story, in her own words:
I was raised in a small town in West Texas that had a population of about 600.  While growing up I spent the majority of my time outside enjoying nature. In 1986, I met my best friend and husband, Nathan. We enjoy camping and hiking with our four dogs. I currently work for Hewlett Packard Enterprise (formally EDS).  I became interested in photography when my aunt gave me my first camera at about the age of 10.  We did not have enough money to process film, so I pretended to take pictures of the deer, cattle, rattlesnakes, and anything else I could find.  When I started working, I made sure film was in my budget even if it was just one roll.  I was in hog heaven when Nathan gifted me with my first digital camera.
When the Allen Americans opened up their franchise in 2009, Nathan purchased our season tickets and received special permission to bring in my camera.  In 2011, I became the team photographer and was able to take pictures from the bench. The greatest pleasure was capturing the passion of the players while winning four championships. How did a country bumpkin who had never seen hockey become interested in the game? It occurred about 25 years ago.
I became a hockey fan when flipping through TV channels and came across a Dallas Stars game. Razor (Daryl Reaugh) and Ralph (Strangis) were teaching the rules and explaining what was happening on the ice.  They had me hooked within the first few minutes. When taking hockey pictures, my focus is on the player’s strength, dexterity, balance, speed, hand-eye coordination, and the overall effort they put into the game. In addition to sports photography, I also take family portraits, landscapes, and wildlife.
Here is a sample of Kimberly’s work: 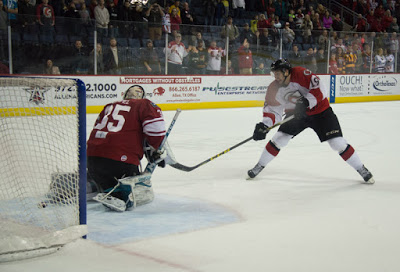 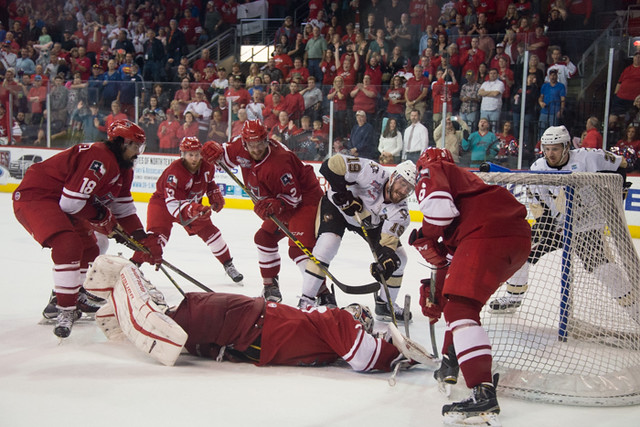 Riley Gill makes a sprawling save in the final seconds of game 6 in the 2016 Kelly Cup Final. Photo: Kimberly Sauer/The Sin Bin 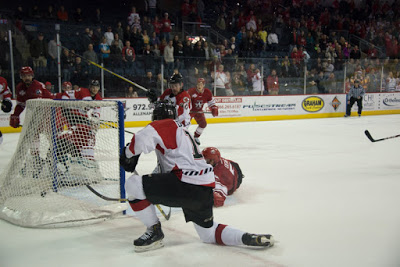 When I wrote the story about Kimberly I asked her for something most people didn’t know about her to use for the “Did You Know” for the day. Here is what she shared with me:
My dad was a rattlesnake hunter and I would go with him.  Every winter we had to keep the snakes warm, so we stored them under our beds.  I had two cages under my bed that held about a 1000 snakes each.
Our thoughts and prayers go out to Nathan and Kimberly’s loved ones and I am sure the same can be said for the entire Allen Americans family. Her legacy will live forever in the people she touched and the thousands of photos she has published of the Allen Americans players and fans.
Rest in peace Kimberly, job well done!