HAMILTON, Ont. – On January 21, 2012, a record-breaking 20,565 fans came to Ivor Wynne Stadium to watch two bitter AHL rivals in the Hamilton Bulldogs and the Toronto Marlies duke it out in the great outdoors. It was the largest crowd to ever see an American Hockey League game in Canada and was broadcasted coast-to-coast on Sportsnet and the NHL Network. With over sixty percent of Canada’s steel produced in Hamilton and it’s first steel factory opening in 1900, it set the stage for what was known as “The Steel City Showdown”.

It was a chilly -4°C (25 degrees Fahrenheit), but the tension in the battle of Ontario was boiling over.

This game was the fourth outdoor game of the 2011-12 season, with the most recent game coming on January 6 in Philadelphia, where Adirondack matched against Hershey. That game ended in overtime, where Shane Harper scored to win the game, in front of a crowd of 45,653.

Nazem Kadri was on hand for the announcement in November and had hopes to play in the 2012 AHL Classic.

“As a kid, you’re always on ponds and in the backyard playing outside, but never an organized event. It’s definitely something I’m pretty excited about,” Kadri told reporters.

This was the fifth contest of the season between the two, where Hamilton had won three of the four previous games. Both teams had rosters full of great goal scorers, familiar NHL faces, and toughness. Here are the respective rosters for both clubs: 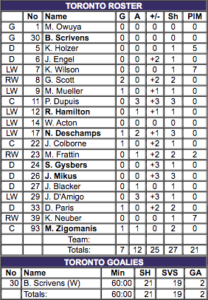 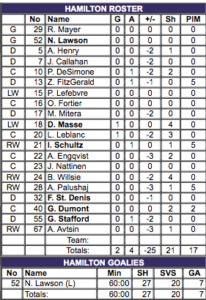 Just 27 seconds into the game, Ian Schultz centered a pass to Dany Masse, who buried it for the Bulldogs to make it 1-0 in the early going. Garrett Stafford would also cash in for a helper.

Not a moment later, a fight would break out between Zack Fitzgerald and Kelsey Wilson. The two showed what the battle of Ontario is all about in the AHL, with a scrap for the ages.


“That fight turned things around. You need those guys on your team…People who are opposed to fighting in hockey can take a look at that fight and see how it benefits a team because that really turned the tide for us.”

–BEN SCRIVENS TO THE TORONTO STAR

After a couple of minutes of physical hockey, the Marlies fired a backhander on net through traffic. They tied the game at one on a goal by Mike Zigomanis. Ryan Hamilton initially just threw the puck towards the net on a feed from Nicholas Deschamps. What started as a simple dump on goal, and something that should have been easily steered aside by Hamilton, turned into a soft goal.

Almost three minutes later, the Bulldogs got caught in their end and needed a line change. This set up beautifully a great pass from the corner by Philippe Dupuis to spring Jerry D’Amigo near the goal line, and the delivery from Greg Scott, who waltzed through the Bulldogs defense to make it 2-1 just 8:19 into the first period.

The Marlies wouldn’t stop the pressure through the first. They continued to hammer shots on Nathan Lawson. With under eight minutes left, the Marlies would get an insurance goal marker when Drew Paris would get his first of the season on a pass by Zigomanis, who had complete patience in the offensive zone.

The first penalty would go to the Marlies when Matt Frattin would sit for goaltender interference, which gave the Bulldogs a chance to get back in the game. The power play didn’t look all that great and they didn’t get to test Scrivens, only registering two shots.

The first eight minutes of the second period acted as a ping pong match, as both teams chased the puck back and forth. Just moments later, though, Mark Mitera turned the puck over to Marcell Muller, who raced along the side of the boards and ripped a hard wrister towards Lawson to put the Marlies up by three.

At the midway mark of the second period, the Bulldogs started applying more pressure on the Marlies. Hamilton was quick to capitalize on a poor line change, where Phil DeSimone threw a long stretch pass to Louis Leblanc, who made a great deke to fake out Scrivens and bury his eighth of the year.

Not long after the Bulldogs got the game in reach, Gabriel Dumont took a tripping call to give the Marlies their first power play of the game with 8:39 left in the second period. The power play had good movement early on, with Frattin and Zigomanis in the slot area for a dangerous shot, but fell stagnant.

The period would end 4-2 for the Marlies, who also led shots on goal 20-15. Although both looked strong in the period, Hamilton seemed like the hungrier team. Lawson began to have trouble with the shade and following the puck through the sun as the second period wore on.

It only got worse for the Calgary native, as to start the third period he was staring directly in the sun. Because of this, both goalies would have to switch sides at the 10-minute mark.

The first half of the third period continued to stay as a back and forth affair, where Hamilton registered a minimal amount of shots and Toronto tried to create a scoring opportunity.

As time dwindled late in the third period, the Marlies got hungrier and hungrier. In the Bulldogs corner, D’Amigo shoveled it to Frattin, who found Joe Colborne in the slot to rip a shot over Lawson on the blocker side. That goal made it a five point night for the Marlies and got them up by three.

To get to the six goal mark, Jesse Blacker fired a shot from the point, where Deschamps got a stick on it in front to change directions. That goal boosted the lead to 6-2, with two minutes to play.

Toronto would get one more before they left, as D’Amigo found Scott in the slot to get his 12th of the season.
Both would add to the penalty sheet with 55 seconds left in the game. Kyle Neuber would sit for a slash, and Schultz came in for the third fight of the game.

The Battle of Ontario would end with a score of 7-2, and the shot clock would read 27-21 for Toronto.

Both of these clubs played each other six days prior, where Hamilton took the game 2-1. That game was far different than the Steeltown Showdown.

Despite giving up the first goal, the Marlies looked calm and cool the whole game, without much of a sweat. Scrivens stayed solid for Toronto and wasn’t tested heavily.

In the last half of the third, it looked like the Bulldogs simply gave up, with the exception of a five-minute stretch early in the period where they were able to get a decent zone entry. In the first five minutes of the third, the Bulldogs didn’t register a shot.