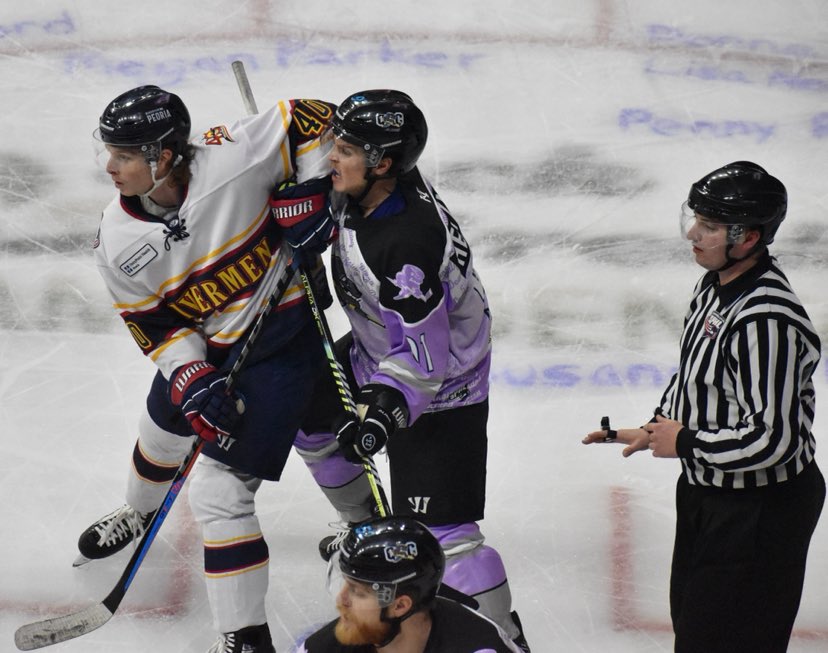 The Quad City Storm faced another tough weekend, playing three games in three days for the second weekend in a row

MOLINE, Ill. – The Quad City Storm faced another tough weekend, playing three games in three days for the second weekend in a row. The Storm took five out of six points in the weekend, losing in overtime on Saturday against the Peoria Rivermen 2-1 before winning 3-2 in OT on Sunday afternoon. It was another heated rivalry weekend for the Storm against their closest rival, though there were no five-minute majors.

“You got to find some motivation within themselves,” said Coach Dave Pszenyczny about two three-in-three’s Friday night. “We came up with a big win last night on the road. I thought we competed very well tonight. Just snake bit in trying to find goals. I thought we had a chance the whole game, but it is what it is.”

The games were physical, though the Storm were a man short only five times on both Saturday and Sunday, though they served nine penalties against Peoria. This gave the Storm’s penalty kill a needed break after Friday’s seven penalty kill opportunities against the Evansville Thunderbolts and 12 penalties.  “I didn’t think we played our best game, so to speak, compared to last night,” said Pszenyczny on Sunday. “Funny how hockey works, you can dominate a team one night and not get the result you like and you get the result the next night. Killing all those penalties really takes a toll on our team.”

The Storm were successful only once on the man advantage on Saturday, late in the third period when Marcus Ortiz scored to tie the game and send it to overtime. Both Michael Moran and Kyle Heitzner attempted to fight Cody Dion in the first period, but Dion wouldn’t drop the gloves with either Storm player. Both he and Moran took a seat in the penalty box for roughing for their kerfluffle just over midway through the opening frame.

“I thought we out chanced them, we competed hard, but we still had more to offer,” said Pszenyczny Saturday night. And more to offer the Storm did have.

Sunday’s game was the last Pucks and Paws matinee of the season, and it was a rivalry game that surprisingly didn’t go to the dogs. In a change of pace from previous iterations of the Cold War on 74, the physicality mostly didn’t make its way to the scoresheet. But few penalties doesn’t equal few injuries necessarily. Late in the second period of Sunday’s contest, Tommy Stang was injured but returned to the bench for the third period.

“We need to get healthy. 3 in 3 back to back weekends, definitely never easy. We’ve got a big task with two games, with the road game on Friday and a home game on Saturday. We’ve got to be conscious of that, but at the end of the day it’s one of those things you have to go through at the end of the season,” said Pszenyczny Sunday.

Shane Bennett scored the overtime winner on Sunday off an assist from David Brancik, giving the Storm their fifth out of six points for the weekend. The goal came while both Taylor Pryce and Zach Wilkie were sitting in the penalty boxes, roughing and holding the calls respectively.

The Storm will be back in action on Friday against the Vermilion County Bobcats in Danville before returning home on Saturday for Mystery giveaway night.

With Sunday’s win, the Storm move into fourth place in the standings, just three points behind Peoria.

Be sure to follow @FPHStorm on Twitter for the latest news, updates, and live in-game tweets during the season and beyond.