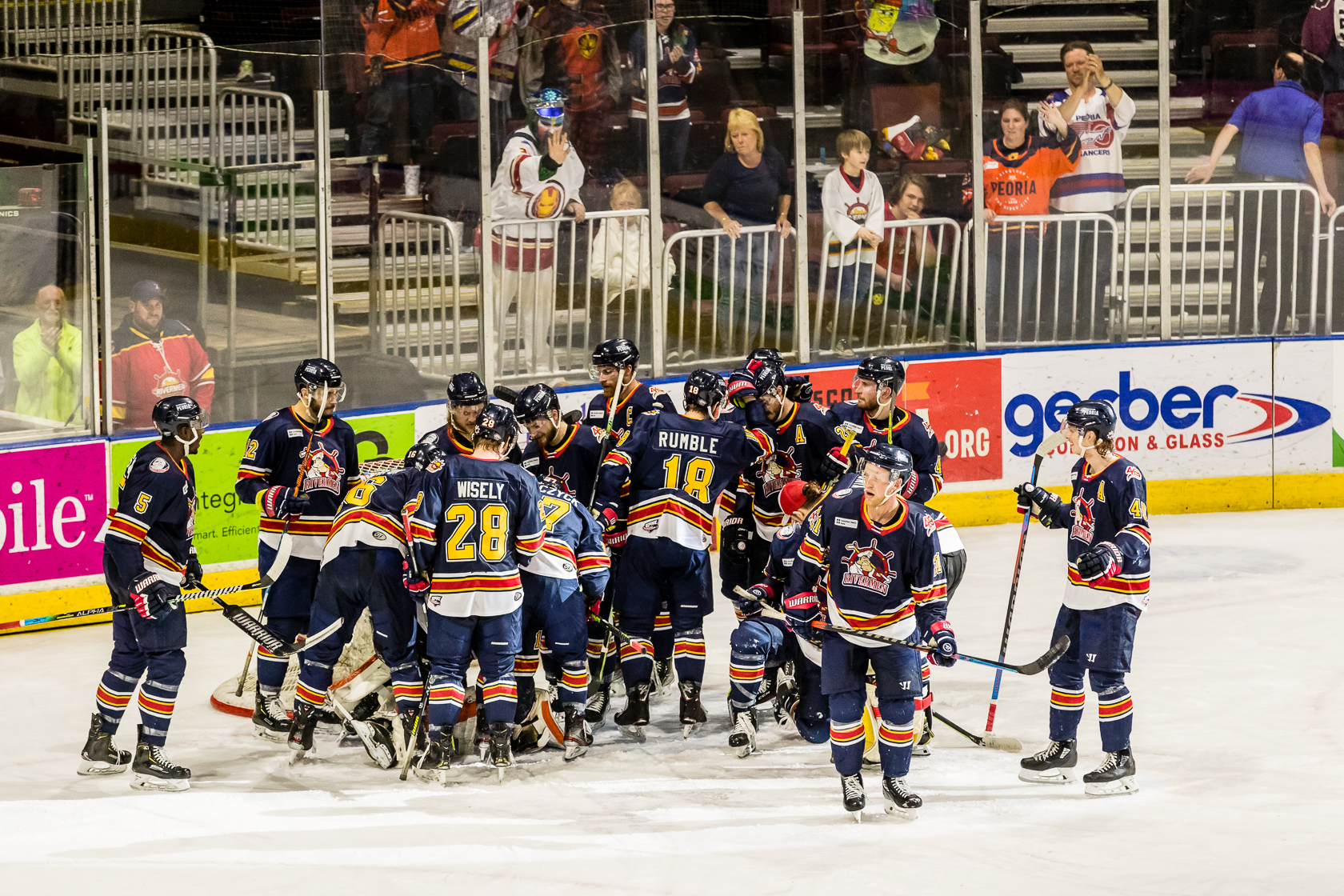 Rivermen Score Three Unanswered, Down Dawgs in Game One

Roanoke jumped out to an early lead, but it was Peoria with three unanswered goals that would be the difference

Rivermen Score Three Unanswered, Down Dawgs in Game One

PEORIA, Ill. – Game one of the 2022 Presidents Cup Finals did not disappoint. The Roanoke Rail Yard Dawgs came into Peoria to face the Rivermen after knocking off the top two seeds in the first two rounds of the playoffs. Roanoke jumped out to an early lead, but it was Peoria with three unanswered goals that would be the difference as the Rivermen downed the Dawgs 3-2.

Peoria came out firing to open things up in the first period, putting the first four shots on goal, but Roanoke netminder Sammy Bernard turned them away. Peoria kept the pressure on, and then, about five minutes into the period, Roanoke started to get their legs. However, it looked like the Rivermen would strike first on the scoreboard. 5:52 in JM Piotrowski sent a shot at the net from the right-wing boards, Mitchell McPherson batted the puck into the back of the net, but the goal was called off for being hit in with a high stick. 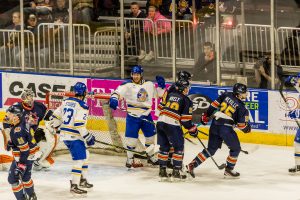 Late in the period, with 6:22 remaining and still no score, the Rail Yard Dawgs looked to change that. Mac Jansen looked like he was going to skate behind the Peoria net. He saw Travis Armstrong moving in on the left faceoff circle. He sent a pass through a few Rivermen defenders right onto Armstrong’s tape. Armstrong snapped the puck in past Jack Berry, and it was the Dawgs who found the scoreboard first in the President’s Cup Finals.

Despite outshooting Roanoke 10-8, it was the Rivermen trailing heading into the first intermission. It’s also worth noting that two of the most penalized teams in this season’s playoffs did not commit a single penalty in the first period.

Roanoke carried that first-period momentum into the second period and dominated play early on. Just over four minutes in, Nick Ford sent a centering pass in the direction of Garrett Sargis, who tipped the puck past Berry, giving the Rail Yard Dawgs a two-goal lead.

The penalties started rolling in after nearly half the game without a single one. Roanoke’s CJ Valerian was called for hooking, and then before that penalty expired, Brady Heppner was caught tripping. The Peoria powerplay could not convert on the 5-on-3 powerplay, but they made the Dawgs pay shortly after it expired. Zach Wilke sent a shot on goal and McPherson was in the perfect position to pot the rebound, continuing his goal-scoring success against Roanoke.

Peoria didn’t want to be left out of the penalty party, and two minutes later, Brandon Rumble was called for holding, and the Rail Yard Dawgs went on their first powerplay of the night. The Peoria penalty kill unit did exactly what they needed, and the score remained 2-1. 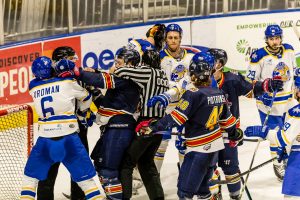 With 2:59 remaining in the middle frame, Peoria went back on the powerplay. Armstrong went to the box for a slash this time around. Once again, the Rivermen powerplay showed why they are one of the best in the SPHL. Rumble sent a howitzer of a slapshot from the blueline, and Bernard never had a chance. All of a sudden, the game was all tied up.

Things got a little chippy as time expired in the second period, and the end result was a roughing call on Alec Baer which meant Roanoke was going to have a chance to take the lead back when the third period got going.

Peoria’s penalty kill unit was up to the challenge once again and killed off the Roanoke power play to start the final period. Both teams went back to full strength and battled for that all-important next goal. It would be the Rivermen who would find that goal. 6:47 into the period, defensemen Lordanthony Grissom skated all the way into the offensive zone, took a hard-angle shot that was nearly even with the goal post. The puck slipped past Bernard, and Peoria scored three unanswered goals after going down 2-0. 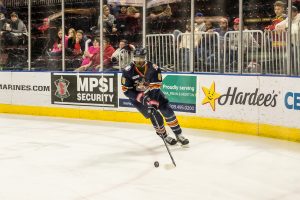 In the final half of the third period, Roanoke was given another shot on the powerplay when Baer was called for hooking. The power play was short-lived because CJ Stubbs would be called for holding. Neither team was able to convert on their respective abbreviated powerplays, and the teams went back to skating five aside.

Looking to tie things up with 2:13 remaining, the Rail Yard Dawgs pulled the goalie for the extra attacker. Berry turned away everything Roanoke sent his way. Grissom was called for cross-checking nearly a minute into the 6-on-5 attack, and the Rivermen now had to kill off a powerplay. Thirty seconds later, Brant Sherwood would negate that powerplay when he was called for roughing after Kasey Kulczycki was scooping the snow up off the ice into his direction from the bench.

In the waning seconds of the period, the Dawgs had some unbelievable chances to tie the game but were stopped by some even more unbelievable goaltending. Berry stood on his head, and the Rivermen were victorious in game one of the series.

Game two will take place tonight at the Peoria Civic Center and is sure to be another exciting battle between these two teams. The Rail Yard Dawgs will look to get a win and steal home-ice advantage, while the Rivermen will be looking to push the Dawgs to the brink of elimination.