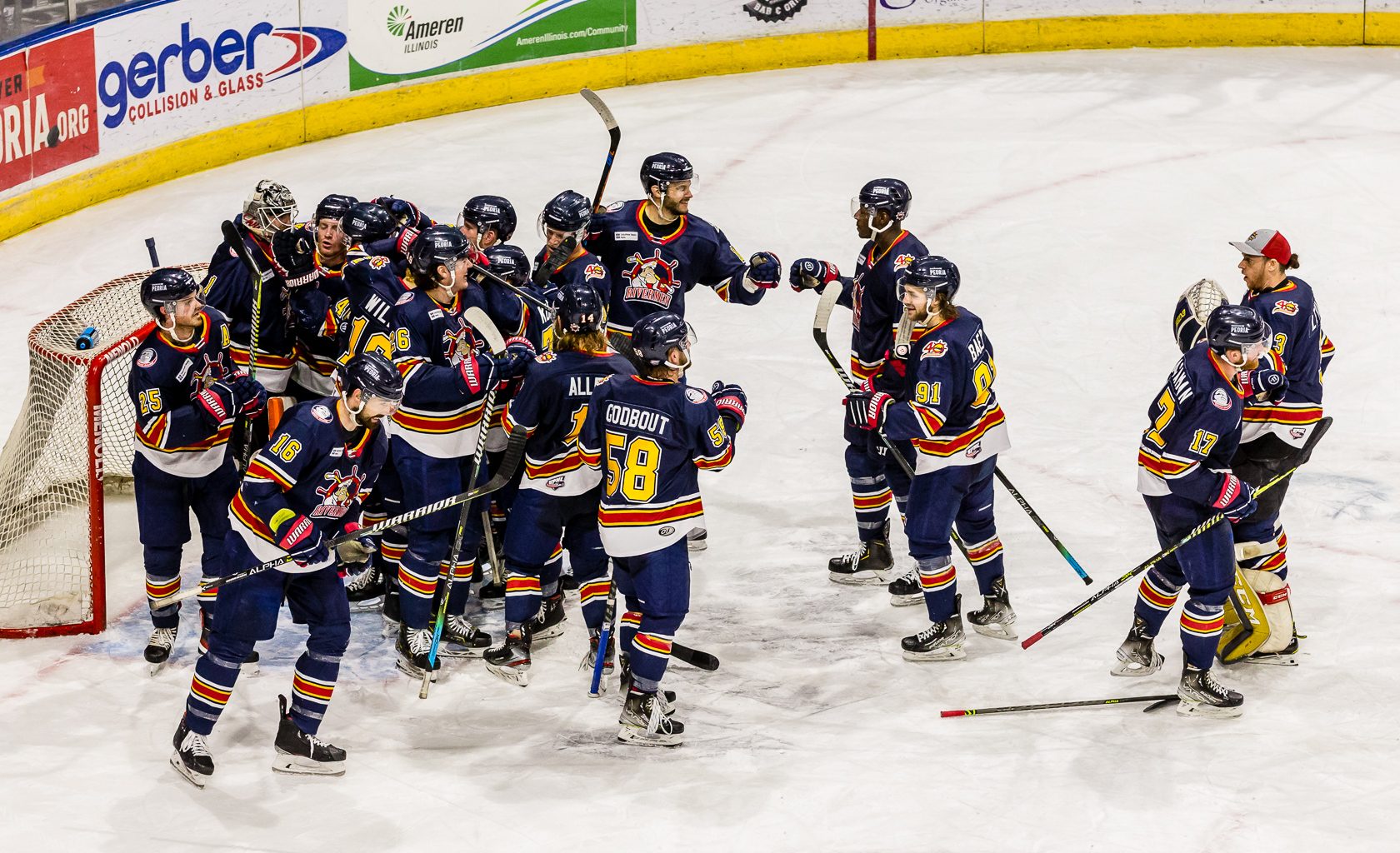 MACON, Ga. – Last May, Alec Hagaman, Nick Neville, and Jordan Ernst were among those hoisting the President’s Cup trophy at the Macon Coliseum for the Pensacola Ice Flyers.

Now back with the Peoria Rivermen following the ‘opt out’ season, they helped advance Peoria to the second round and send Pensacola to elimination in Saturday’s 4-2 win at Carver Arena. Hagaman had a goal and assist with Ernst scoring the game’s final goal.

In doing so, the Rivermen got a measure of postseason revenge against the Ice Flyers, who beat Peoria in a last-second President’s Cup Final in 2016. The win, the first series-clincher for Peoria against Pensacola, returns Peoria to the semifinal round for the first time since 2018. Each of the past three times that the Rivermen have earned a semifinal berth, they have advanced to the finals. 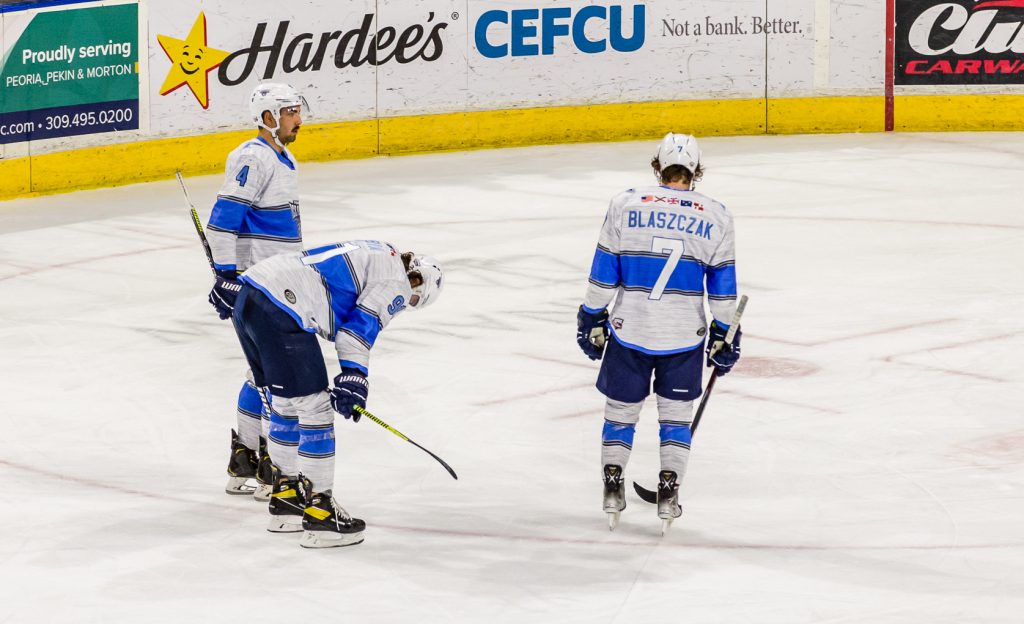 The Ice Flyers react to their season coming to an end on Saturday against Pensacola. Photo: Tim Lester, Field Pass Hockey

Another who was part of the Ice Flyers in the regular season last year for a handful of games, Rivermen goalie Jack Berry got the nod in net Saturday after coming on in relief of Eric Levine the night before. He was up to the task, turning away 25-of-27 shots. His counterpart, Pensacola’s Cody Karpinsky, blocked 35 of the 39 shots against him.

A night after a bevy of power-play goals marked the Ice Flyers win, it appeared that special teams would again play a role. With Peoria up 1-0 following an unassisted Dale Deon goal 5:12 into the game, a serious case of deja vu settled over the Carver Arena when Frederic Letourneau tied it 1-1 on a power play 10:34 into the contest.

But back came Peoria. A hooking penalty against Cory Dennis proved costly for the Ice Flyers, as Hagaman turned it into a 2-1 lead on a goal assisted by Mitchell McPherson and Alec Baer 17:20 into the first period.

The score was deadlocked at 2-1 for nearly the entire second period before with 18 seconds to play McPherson and JM Piotrowski assisted Austin Wisley to stretch the lead to 3-1. 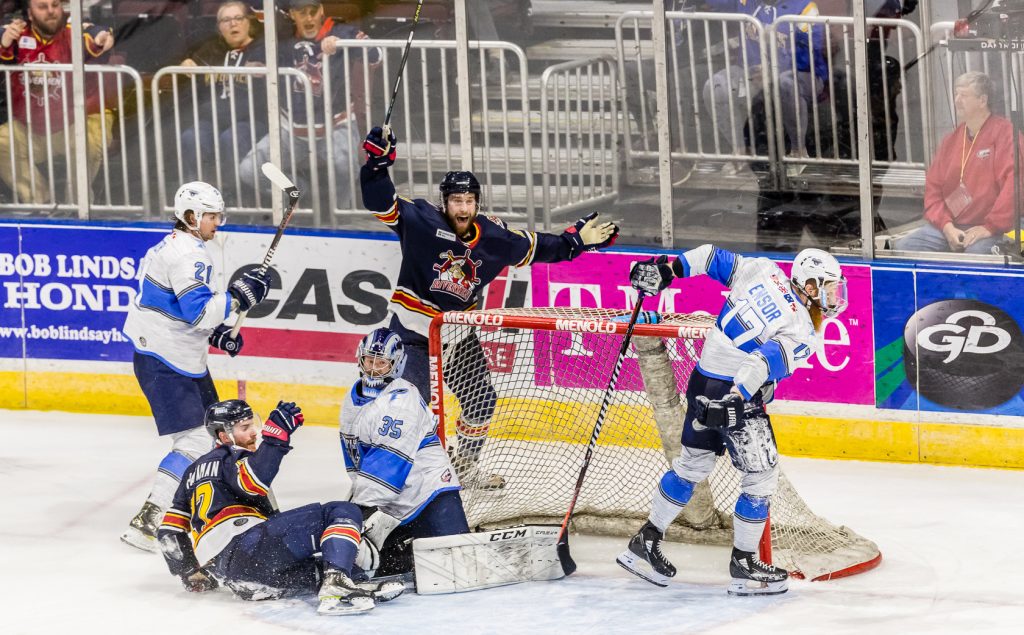 Pensacola, however, didn’t go away easily. Just before the 15-minute mark of the final period, Weiland Parrish struck on the power play to slice the Rivermen lead to 3-2. Peoria needed little time to find some insurance, with Ernst scoring nine seconds later assisted by Hagaman and Lordanthony Grissom 14:28 into the final period to help put the game away.