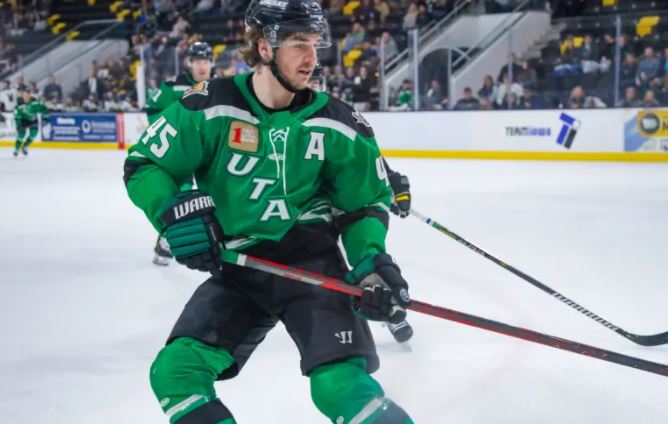 Despite giving up the game’s first three goals, the Iowa Heartlanders fought back to within one goal, only to see the Grizzlies pull away in the third period

CORALVILLE, Iowa – The Utah Grizzlies opened with three unanswered goals on their way to a 5-2 victory over the Iowa Heartlanders on Friday. Charle-Edouard D’Astous and Zac Robbins each scored two goals and added an assist to lead Utah. Peyton Jones stopped 29 shots to earn the victory. Hunter Jones stopped 26 of 31 shots for Iowa.

The Grizzlies took a two-goal lead early in the first period thanks to goals scored 15 seconds apart. The first came at 5:33 when Quinn Ryan passed the puck to D’Astous, who blasted a one-timer by Jones for his 16th goal of the year. The Grizzlies were right back on the board 15 seconds later when Robbins fired a shot that Brian Bowen redirected in for his 19th tally of the year.

The 2-0 lead held into the first intermission, and Utah added to their lead just before the six-minute mark of the second period. With Grizzlies on the power-play, Ben Tardif passed the puck to D’Astous, who lifted a wrist shot past Jones for his second tally of the contest.

The Heartlanders were in danger of being blown out, but Zach White capitalized on a 5-on-3 power-play at 12:27 to cut the deficit to two. Ryan Kuffner had the puck just inside the right face-off circle, making a perfect feed across the crease to White at the back door, who buried the one-timer for his eighth goal of the year.

Iowa cut the deficit to one, scoring right at the seven-minute mark of the third frame. Cole Stallard battled for the puck in the corner inside the Utah zone, coming away with it before noticing Luke Nogard alone in the slot. Nogard lifted a wrist shot that beat the Utah netminder for his fifth goal of the season, making this a 3-2 contest.

Iowa was back in this game, but the Grizzlies put the pressure on the Heartlanders, limiting Iowa to just six shots in the final frame. Utah put 12 shots on Jones, which helped the team to get two goals in the final four minutes of the contest to secure the victory. Robbins scored his first tally of the night at 15:56, taking a centering pass from Bowen before drilling a one-timer past Jones. With two minutes left, Robbins added his sixth goal of the season. Nate Clurman took a shot that was saved, but Robbins tapped in the rebound to make it 5-2. It was the first two-goal performance of Robbins’ career.

Kaid Oliver had two assists for Iowa, who fell to 17-22-6-1 and remain in last place in the Central Division.

These two teams will close out their three-game set tonight, with puck drop scheduled for 6:05 pm CT.