51 years later, the Rocket are waiting for their turn close to the sun. Their 13-15-5 record has landed them sixth in the North Division. Going into Sunday’s game against Toronto, the team needed some extra jet fuel, which they had. Going into the game, Laval had collected points in four-straight contests, a 3-0-1 trail.

The Marlies were the first to spark a goal with a play that was questionably offside. Laval wasn’t happy as Adam Gaudette appeared to be a hair offside. His slick forehand to backhand move was enough to give the Marlies the opener.

The goal will stand, but Laval is upset that it wasn't called offside. You be the judge: pic.twitter.com/4A8r5JvzxZ

Then, in the mix of confusion and chaos in the building with the fire alarm activated, the red-hot Laval power play put up numbers with help from Joël Teasdale. The zinger of a shot seemingly had a vapor trail, which could have been the spark for the building’s fire alarm.

That goal turned out to be the start of a downward spiral for Toronto in the first. Blind passes, sloppy defense, and poor discipline were part of the problems that plagued the team. The feeling wouldn’t subside for the rest of the game.

While the shots were 9-3 for Laval, the Marlies began the second by blasting through multiple penalties and poor puck control. But, when the league’s second-best power play went to work, that’s when the Marlies saw results. It was just their ninth shot of the game when Bobby McMann ripped home the game-leading goal to make it 2-1.

The unphased Marlies went into the third with the lead in both goals and penalty minutes. Rafaël Harvey-Pinard said that the team had to stay the course in the third, which was the best advice anyone could ever give them. 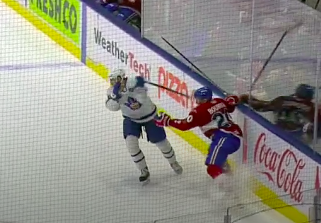 The Marlies would open a busy period of scoring with a long-range shot by Alex Steeves. The shot was hard for goaltender Kevin Poulin to see, with traffic on all ends crisscrossing the net.

Not even a minute later, Gabriel Bourque found a way to keep it close again with the 3-2 marker, thanks to a slot tap in past Joseph Woll, who, to that point, witnessed 34 shots come his way.

With six minutes in between shots, the Marlies found an insurance goal, thanks to another marker from McMann. Straight from the box following a turnover, McMann received the pass from Nick Abruzzese, who had six feet of the net to look at for the finish.

Possibly it was goaltending that sealed the deal for the Marlies. Woll stopped 56 of 58, earning him a franchise record for consecutive wins by a goaltender, with nine straight.

Sometimes the high of being on top is so good; it’s like you are floating. The Marlies floated in a game they weren’t supposed to win.

Sometimes you have to feel bad for the Rocket, Man.