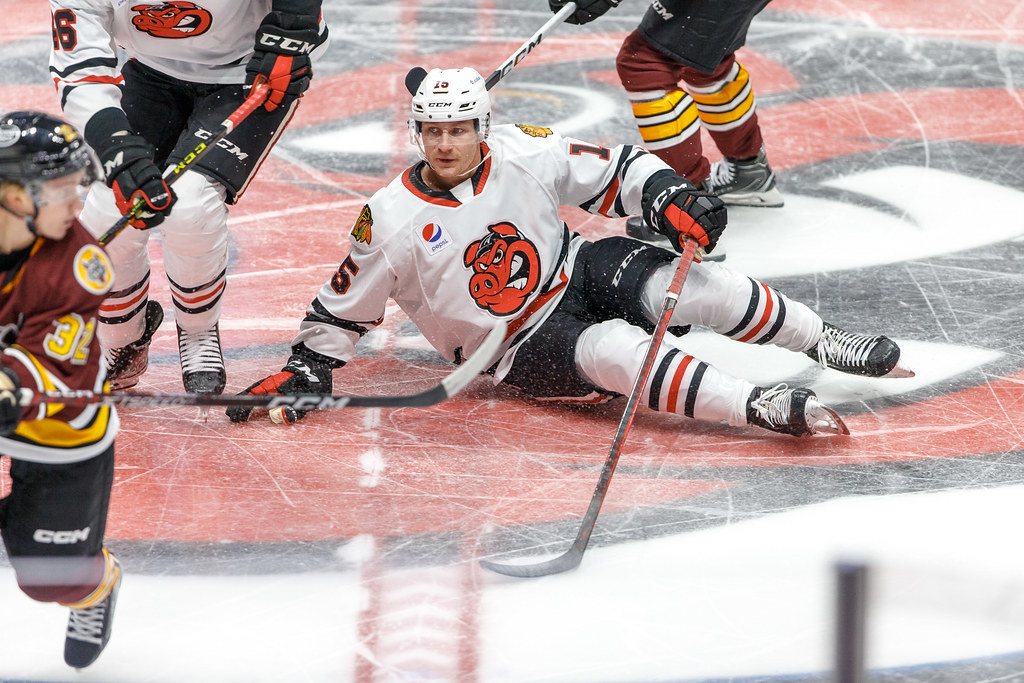 Carson Gicewicz and the Rockford IceHogs had their home opener spoiled Saturday night by the Chicago Wolves. (Photo by Todd Reicher/Rockford IceHogs)

ROCKFORD, Ill. – The Rockford IceHogs opened a refurbished BMO Center against the Chicago Wolves Saturday night. A rash of penalties in the first two periods was too much for the IceHogs to overcome despite several key scoring opportunities. The Wolves spoiled Rockford’s home opener, beating their Central Division rival by a score of 4-1.

Chicago picked up the win on the strength of its power play, which scored twice in six chances. Rockford’s only goal came on the man advantage. However, the IceHogs failed to capitalize on several Wolves infractions.

“I thought the guys battled and we tried,” said Rockford coach Anders Sorensen to the media following the loss. “Overall, we did some good things that probably didn’t result in the goals we wanted.”

Chicago took a 1-0 lead at the 14:28 mark of the opening period, after the Hogs sent an early flurry of pucks toward Wolves goalie Zachary Sawchenko. William Lagesson struck from the left post to give Chicago a lead they would never relinquish.

Rockford had a chance to tie the score when Bobby Lynch was awarded a penalty shot at 16:37 of the first period. Lynch got Sawchenko down on the ice, but couldn’t get the backhand shot over the goalie’s pads.

The Wolves began the middle frame with a short power play held over from a slashing penalty by Hogs defenseman Adam Clendening. Chicago needed just 16 seconds to convert. Jack Drury knocked in a feed by Anttoni Honka for a 2-0 Wolves lead.

The IceHogs closed the gap to 2-1 with a one-timer off the stick of Lukas Reichel. Assists went to Brett Seney and former Wolves forward David Gust at the 14:08 mark.

Seney was called for tripping late in the second period, leading to Brenden Perlini‘s first goal of the season with 51 seconds remaining. Outshot by Chicago 26-16 through 40 minutes, the IceHogs trailed 3-1.

The pivotal point in the final period was near the midway point, when Griffin Mendel and Ryan Dzingel committed penalties 51 seconds apart, leading to a 5-on-3 advantage for Rockford. The Wolves hustled defensively and killed both infractions, ending the Hogs best chance to get back into the contest. Malte Stromwall closed out the scoring with an unassisted shorthanded goal with 1:25 to play, sealing Rockford’s fate.

Hogs goalie Jaxson Stauber made his pro debut Saturday following Arvid Soderblom‘s recall by the Blackhawks. Stauber stopped 19 of 22 Wolves shots. Sawchenko made 27 saves to pick up the win for Chicago.

“We definitely want to have more inside the dots and be around the net,” Sorensen said as his team had trouble penetrating the Wolves defense. “That’s the kind of criteria to score goals in any league, right?”

Rockford will get the chance to take the offense closer to the crease Sunday afternoon, when they host Manitoba at 4:00 p.m. CDT. The Wolves are off until Tuesday, when they host the Texas Stars.