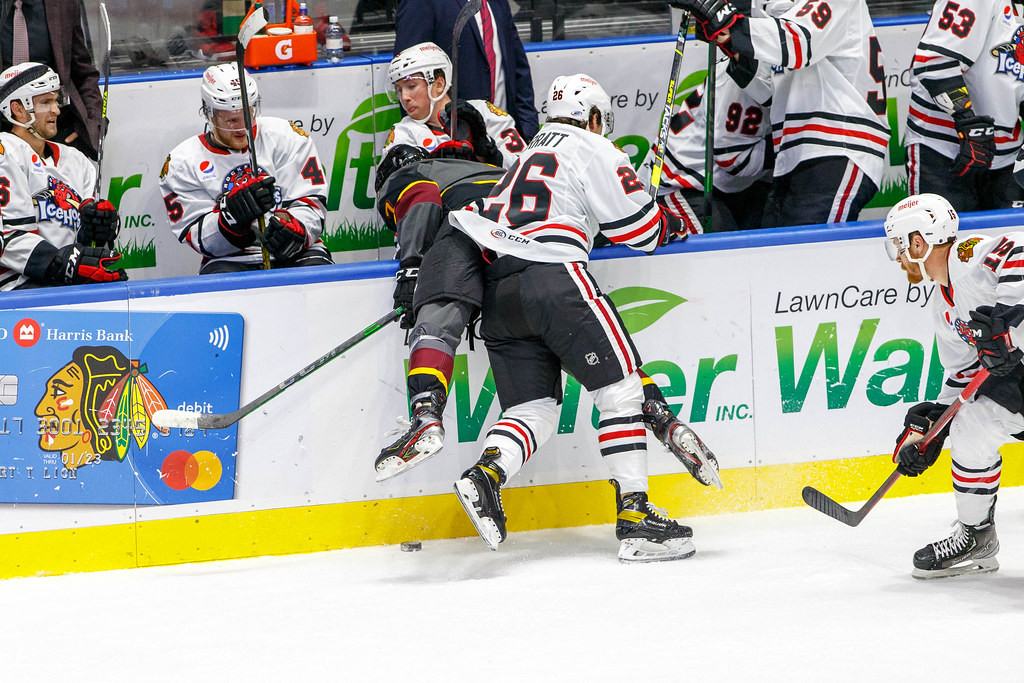 Rockford, Ill.-One month into the 2021-22 season, a young Rockford IceHogs team is struggling to get up to speed with the rest of the AHL. With a full week preceding a rematch with their interstate rival, this Friday, interim coach Anders Sorensen knows what awaits his squad.

“We have to be focused and we have to be ready to go on Monday to prepare for two games with Chicago,” Sorensen said at the post-game presser following a 4-1 loss November 12. “We got a taste today of how they play and how competitive they are, so we’ve got to make sure we answer that.”

What might be at the top of Sorensen’s to-do list? Rockford has two major problems ten games into the 2021-22 campaign:

The piglets 3-6-1 record and sixth-place status in the AHL’s Central Division can be easily explained by looking at the stat sheet. Rockford is badly outshot on a nightly basis and gives up tons of chances from close range.

The IceHogs are dead last in the league in both shots taken (21.50) and shots allowed (37.40) per game. Rockford is being outshot in the first period 134-68. When your opponent gets double the pucks to the net to open play, it’s easy to dig yourself into a hole. That certainly was the case against the Wolves, who were at the top of the AHL’s Central Division entering the contest.

“We were casual,” Sorensen admitted to Hogs broadcaster Joseph Zakrzewski after Friday’s loss. “We didn’t seem like we were ready to start on time. The Wolves, give them credit, they came out hard. They came after us and we didn’t really have a very good response.”

Rockford mustered a single shot on goal midway through the opening frame-Brett Connolly‘s offering from the outside of the right circle. On the other hand, Chicago went up 3-0 after peppering rookie goalie Arvid Soderblom with 16 shots. The IceHogs skated to the locker room to a chorus of boos.

“Over the course of the game, you want to see much, much higher compete level than we showed for sixty minutes today,” Sorensen said. “It’s not good enough.”

Rockford is 1-3 four games into a five-game homestand. Friday’s contest is the front end of a home-and-home series with the Wolves this weekend. Sorensen spoke to the media last week and mapped out the key to righting the ship.

“We’re gonna make sure we’re structurally sound coming back into our own end, that we’ve got numbers coming back,” he said. “We’ve got to get guys going to the net before we get pucks to the net, so the biggest thing for us is making sure we’ve got bodies getting there before the puck gets there.”

As is the case for many prospect-heavy teams, learning to navigate the professional ranks is an ongoing process. Sorensen is looking to advance Rockford’s learning curve at practice this week.

“Some of our younger guys definitely need to learn to play in this league,” he said Friday night. “This league is a good league. There’s a lot of good players, a lot of good teams. A lot of our younger guys just need to learn to play on an everyday basis and every shift basis and every period basis. That’s the biggest thing here.”