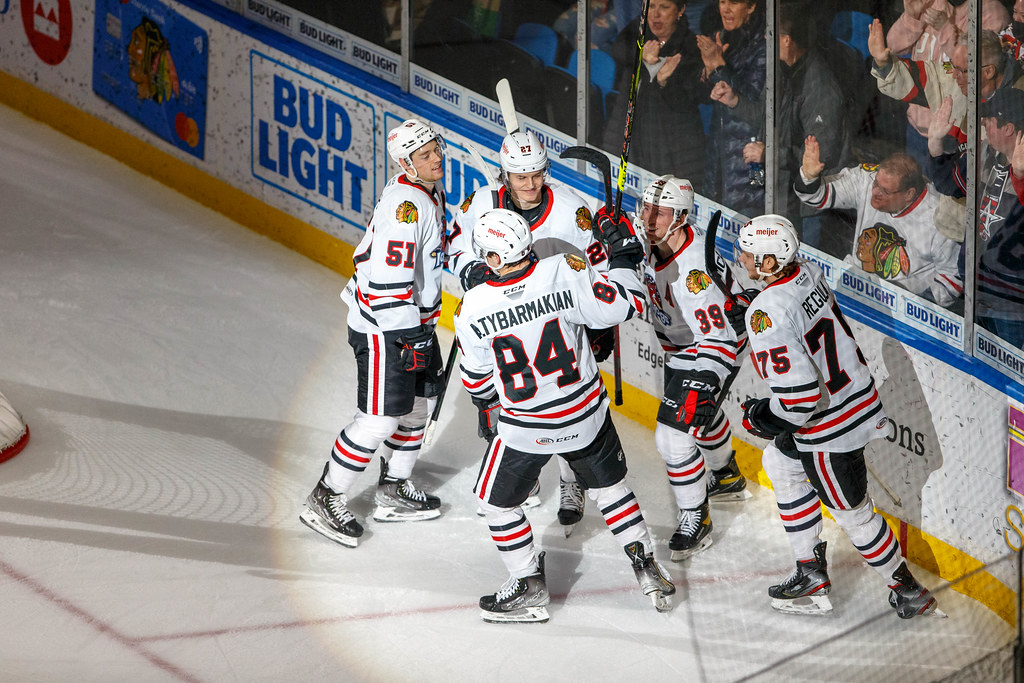 ROCKFORD, Ill. – Over the weekend, the Rockford IceHogs reached the halfway point of the 2021-22 season. Rockford has played 37 of its 72 scheduled games heading into a home-and-home with the Chicago Wolves starting Friday night. How did the Hogs fare in the first half?

Surprisingly well, considering they can’t score on a consistent basis.

The IceHogs (17-16-3-1) are currently the 29th of the 31 AHL teams in goals per contest (2.70). Yet, there is a dogfight between Rockford, Iowa, and Milwaukee for the third spot in the Central Division standings. Rockford now sits in fifth place with a .514 points percentage. It’s a long way to go in terms of earning a playoff spot. However, the IceHogs are still very much in the thick of things.

At the moment, the Hogs are a team of grinders riding goaltending and defense to a very respectable showing in the first half of the season. Rockford continues to limit the kind of defensive breakdowns that plagued the club over the past year and a half.

The young defensive corps has shown great improvement. They are steady in their own end and have shown a lot of poise in bringing pucks out of the defensive zone. Ian Mitchell leads the blueliners in scoring with five goals and ten helpers in 30 games.

Alec Regula (2 G, 12 A) got his season started in mid-November due to back issues. However, he has been a key part of the defensive surge along with Wyatt Kalynuk (4 G, 6 A) and Issak Phillips (4 G, 6 A). Meanwhile, Jakub Galvas (1 G, 8 A) and Nicolas Beaudin (1 G, 7 A) have also provided strong defensive play.

After giving up over four goals a game in the first month of the season, the IceHogs have tightened things up in their own end considerably. They’re eleventh in the league with a current average of 2.97 goals allowed per game.

Goalie Arvid Soderblom was called up to the Chicago Blackhawks on Tuesday. In seven starts for Rockford since being assigned to the Hogs on January 12, the rookie is sporting a 1.96 goals-against average and a .967 save percentage. That has kept Rockford in a lot of close games in the last few weeks.

The apex of Soderblom’s hot January performance came on January 29, when he made 36 saves in a 1-0 shutout of the Wolves. The IceHogs were unable to score a regulation or overtime goal but still picked up two points in Rosemont.

Collin Delia was reassigned to Rockford Tuesday. His first action back with the Hogs will be against the high-scoring Chicago Wolves.

Offensively, the bright spots have been rookie forward Lukas Reichel (13 G, 16 A) and last season’s points leader, Dylan McLaughlin (6 G, 15 A). Reichel has been a point-per-game player; he is sixth among rookies in scoring and fourth in goals. This is despite missing some time on the COVID list, concussion protocols, and a call up to Chicago.

Lukas Reichel gets a hat trick and @goicehogs have their first home victory 🎩🎩🎩#MBvsRFD pic.twitter.com/U8fnnxGq5C

McLaughlin is once again providing solid play at both ends of the ice and is proving that he is capable of scoring at the AHL level. Aside from Reichel and McLaughlin, it has largely been scoring by committee. Andrei Altybarmakian (3 G, 10 A), Evan Barratt (6 G, 7 A), D.J. Busdeker (3 G, 9 A), and Michal Teply (5 G, 4 A) have all chipped in at various points in the first four months.

In recent weeks, Rockford has showed a bit more snarl in its game. The addition of forward Kurtis Gabriel from the Blackhawks, combined with more grit on display from the younger players and the continued physical presence of Dimitri Osipov have seen penalty minutes up from the first few months.

Back To the Grind

Rockford’s schedule resumes on Friday, when they host the Wolves at the BMO Harris Bank Center Friday night.  The two teams take the action to Rosemont’s Allstate Arena on Saturday. Both games get underway at 7:00 p.m. Central time.