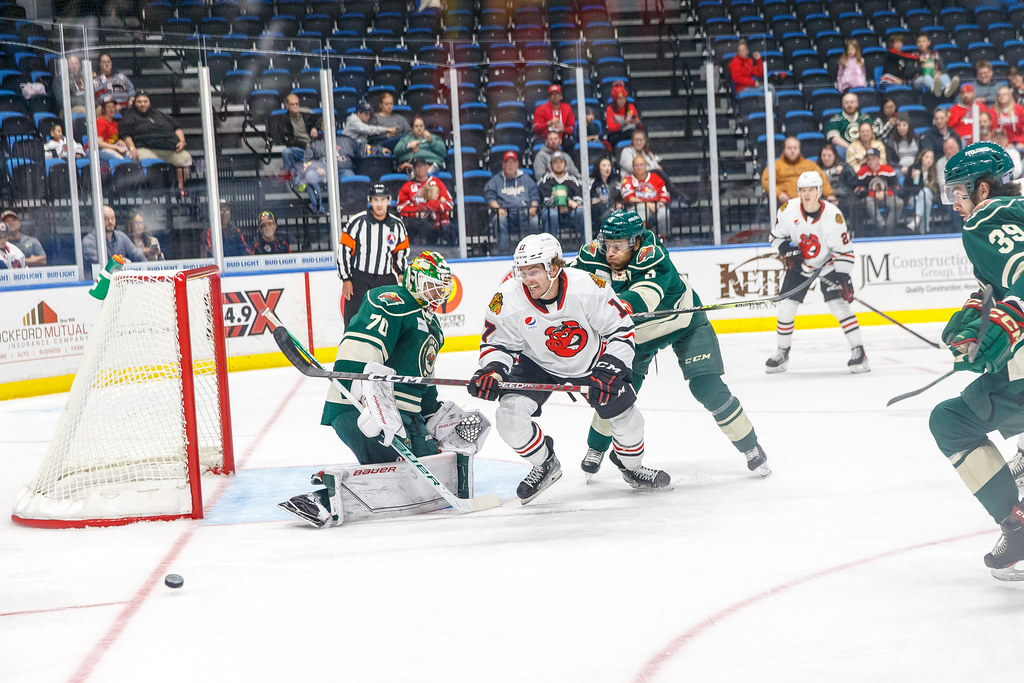 Rockford IceHogs Notes: Three All-Stars And A Pair With Eagles

#AHL | The @goicehogs put up gaudy numbers in the first half of @theAHL season, and they’ll be well-represented in Laval. @FPHIceHogs covers their All-Star selections and previews their upcoming series:

David Gust is one of three IceHogs selected to the AHL All-Star Classic next month. (Photo by Todd Reicher/Rockford IceHogs)

Rockford IceHogs Notes: Three All-Stars And A Pair With Eagles

ROCKFORD, Ill. – Over the first half of the 2022-23 season, the Rockford IceHogs have been led by a trio of offensive standouts. On Wednesday, those players were recognized by the AHL. Lukas Reichel (14 G, 22 A), Brett Seney (14 G, 24 A) and David Gust (18 G, 19 A) have been selected to represent the IceHogs at the 2023 AHL All-Star Classic presented by Bell in Laval, Quebec.

Rockford leads the Central Division team with three selections; that total is tied with Syracuse and Toronto for tops in the AHL. All three are currently in the top ten in league scoring, even with the recall of Reichel and Seney to the Chicago Blackhawks last week. Seney was reassigned to Rockford Wednesday, while Reichel may have earned a longer stay with some impressive play for Chicago.

Let's take a look back at some of the action from our ALL-STARS in the first half of the season! Can't wait for many more of these calls🤩 pic.twitter.com/WzOp7V4Rrv

Hogs prospects should take notice of two of their own getting time in the NHL after strong performances for Rockford in the first three months of action. IceHogs coach Anders Sorensen was quick to point that out at the team’s media session Tuesday.

“I think it’s huge,” Sorensen said. “I think it’s encouraging for those guys to see that if they do play well down here, they’re going to get opportunities there.”

The IceHogs continue a four-game jaunt with a weekend series in Colorado. In their first-ever meeting with the Eagles, Rockford starts the back-to-back Friday at 7:05 p.m. MST. Saturday’s rematch also begins at 7:05 p.m. MST.

The Eagles (20-11-2-0) sit in fourth place in the Pacific Division, with the same 42 standings points as Rockford (19-11-2-2). The IceHogs have dropped two straight heading into the weekend; Colorado snapped a three-game losing streak in Tucson, taking a pair from the Roadrunners.

The matchup looks to be the high-powered Rockford offense against a stingy Eagles defense, third in the AHL at 2.45 goals per game. The Hogs were largely silenced in Iowa, scoring just two goals in two contests, but will have Seney’s playmaking abilities returning to a team scoring at a 3.56 per game rate.

This will be Rockford’s first look at a Pacific Division opponent this season. Sorensen is planning on reviewing game tape before departing West.

“We will take a look at them the next few days here,” he said. “We’ll make sure we’re prepared for them.”

Though Colorado is an unfamiliar opponent, the IceHogs do have one of their top scorers from last season in the fold.

“We have Sikky (Dylan Sikura) who played there last year,” forward Mike Hardman pointed out. “He says they play a hard game and you know, they’re going to, obviously, be hard to play against. I know that our coaches will have us prepared. Hopefully we go in there and get two wins, but I know it’s going to be a couple of hard hockey games, just talking to guys that play against them.”

Slavin, who hails from Erie, Colorado, is looking forward to getting to see some familiar faces over the weekend.

“It’s going to be awesome,” he said. “A lot of my family haven’t been able to come out here and watch me play professional hockey yet, so going home to Colorado, they’re all going to be able to go watch. It’s something I’m excited for.”

The reunion may just include a gift exchange.

“I didn’t get to go home for Christmas because my flights got cancelled, so I’m excited to go see family at home,” Slavin said.

Along with Seney moving back to Rockford, the Blackhawks also recalled goalie Jaxson Stauber on Wednesday. Stauber (3.06 GAA, .896 save percentage) had a three-game win streak broken in Iowa on Sunday afternoon.

With goalie Arvid Soderblom still recovering from a groin injury, Rockford’s tandem will consist of Dylan Wells (2.79 GAA, .906 save percentage) and Mitchell Weeks (2.73 GAA, .909 save percentage).