The Rockford IceHogs could be looking at several different scenarios between the pipes as the 2021-22 season quickly approaches. 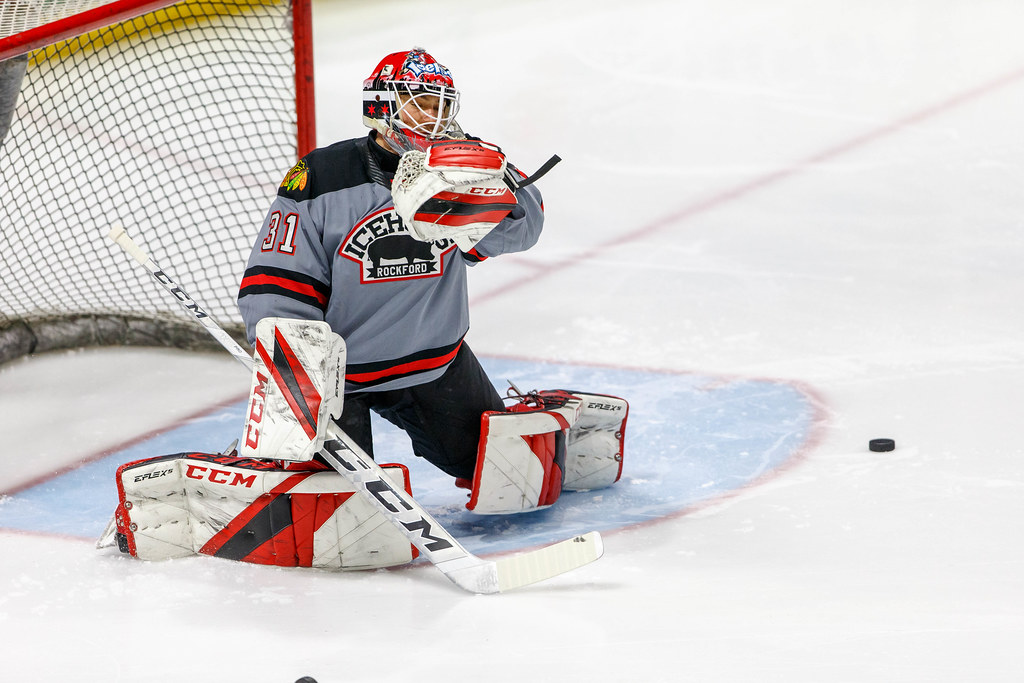 ROCKFORD, Ill. – The Rockford IceHogs could be looking at several different scenarios between the pipes as the 2021-22 season quickly approaches. They could boast a veteran tandem that could anchor a young roster in the early part of the Hogs schedule.

They also could be as green as grass.

It would appear that Rockford’s NHL parent, the Chicago Blackhawks, will be going with Marc-Andre Fleury and Kevin Lankinen in net this fall. It also seems unlikely that the Blackhawks will carry three goalies on their cap-strapped roster.

That leaves a lot of possibilities at goalie for Rockford. Clarity may only come in the days leading up to the IceHogs opener in Grand Rapids on October 15.

In addition to Fleury and Lankinen, Chicago has three goalies under contract. Two of those players, Collin Delia and Malcolm Subban, spent last season with the Blackhawks. Subban served as the primary backup to Lankinen, while Delia struggled to find playing time after a cold opening with Chicago.

Things got so bad for Delia that he requested and received a rehab assignment to Rockford on February 27. He was terrible in his first two starts of the four-game stint. Despite righting the ship in his final two appearances, Delia wound up with a 5.16 goals against average and a .858 save percentage.

Delia is a goalie that has been prone to deep funks in his four-year professional career. He was clearly the odd man out last season in Chicago. Like Subban, he is in the final year of his NHL contract.

Both Subban and Delia are subject to waivers if they aren’t on the Hawks roster to begin this season. There is a strong chance that one or both could be claimed if/when Chicago attempts to assign them to Rockford.

This spring, the Blackhawks signed Arvid Soderblom to an entry contract after a strong performance last season in the SHL. Soderblom does have a European Assignment Clause in his contract. If Subban and Delia both slide to Rockford, it’s a possibility that he winds up back in Sweden for another season.

The Blackhawks seem to be planning on getting the 22-year-old Soderblom steady AHL work. Because of this, they may choose to work out a trade of Delia and or Subban to keep a spot open for a younger goalie.

The IceHogs could see a tandem of Delia and Subban in the crease to open the season. One of the veterans could be paired with Soderblom if a trade or waiver claim materializes.

With the current trend in the organization being loading the AHL roster with fresh-faced prospects, a solid option for the IceHogs would be for Soderblom to pair with former Notre Dame goalie Cale Morris for the workload in net. Morris is on an AHL contract with Rockford and showed promise in limited action in the abbreviated 2020-21 campaign.

The 21-year-old Morris made five starts and two relief appearances for the IceHogs last season, posting a 2.52 goals against average and a .923 save percentage. He’s earned an increased role, providing the Hawks thin the herd at goalie in the coming weeks.

Rockford also has Tom Aubrun under AHL ink for another season. Aubrun, 26, saw most of his action with the Indy Fuel of the ECHL. He did make three appearances in Rockford (4.46, .864) in 2020-21. Aubrun will likely bounce from Indy to Rockford when needed.

The net duties in Rockford have fallen to developing prospects in the past few seasons; that may continue to be the case. However, factors afoot may not reveal a definite tandem until the eve of the 2021-22 AHL season.