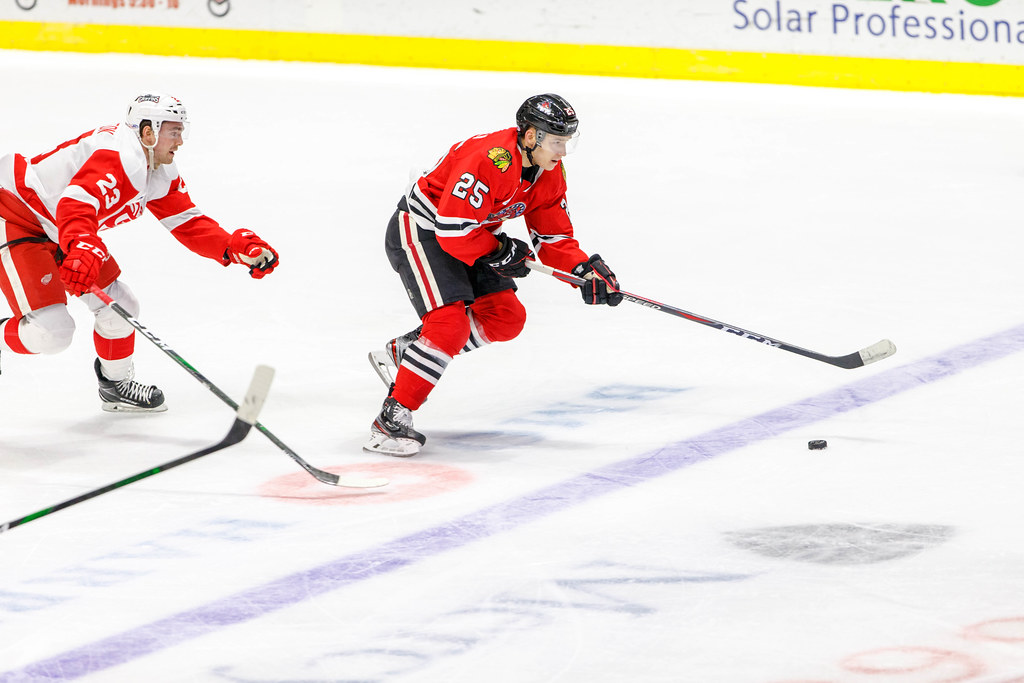 ROCKFORD, Ill. -Normally at this time of the year, the Rockford IceHogs would be counting the days until the start of the season. With the AHL still waiting to set the start of the 2020-21 campaign, some of the piglets will be skating elsewhere for a while.

The AHL announced this summer that the upcoming season would begin no earlier than December 4. However, that date is becoming increasingly optimistic. Until hockey is set to return to AHL rinks, many teams are loaning some of their prospects to play in Europe. Rockford’s NHL affiliate, the Chicago Blackhawks, have employed this tactic with several players.

Tuesday night, the Blackhawks announced that they have loaned forward Brandon Hagel, Rockford’s leading goal-scorer last season, to HC Thurgau of the Swiss League. Hagel was up with the Blackhawks when play was suspended this spring after an impressive rookie season (19 G, 12 A) with the Hogs.

This move by Chicago is the latest in a series of loans that now include three forwards we’ve seen at the BMO, along with three European signings.

Philipp Kurashev was loaned to LC Lugano of Switzerland’s NLA back on September 5. Like Hagel, Kurashev is familiar to Rockford fans. The 20-year-old’s rookie season with the IceHogs was marred a bit by a head injury that cost him five weeks of action. Up until that, Kurashev seemed to be getting into a groove with Rockford. He finished with seven goals and a dozen helpers in 36 games.

LC Lugano begins its season October 1. Also starting the season in Switzerland is forward Pius Suter, who the Blackhawks signed in mid-July to a one-year, entry-level deal.

Suter was loaned to the GCK Lions of the Swiss B League on September 8. Suter, ironically, had opted out of a contract with the ZSC Lions of the NLA after being named its MVP this past season.

Forward Michal Teply was signed by Chicago to a three-year contract back in April. The Hawks fourth-round pick in the 2019 NHL Draft, Teply returns to his native Czech Republic after spending last season in the WHL with Winnipeg.

Teply was loaned to BK Mladá Boleslav of Czech Republic’s Czech Extraliga on September 5. Teply has currently skated in one game for the team, who have just begun play this season.

Also playing in Czech Extraglia will be forward Matej Chalupa, who signed with the Blackhawks at the end of May. Chalupa was loaned to Mountfield HK back on August 15.

Tim Soderlund was loaned to Sweden’s Almtuna IS of the Hockey Allsvenskan League on September 1. The 22-year-old forward struggled to find a role with the Hogs, splitting time between Rockford and the Indy Fuel of the ECHL last season.

Will there be more players sent to Europe on loan by the Blackhawks? Until Tuesday, all of the loans involve players who are simply staying home to play in their native countries. With news of Hagel being loaned, similar moves from Chicago in the next few weeks aren’t off the table.

All this points to opening night in the AHL moving further and further into the future. Hagel is the latest, but may not be the last Hawks prospect to be sent to Europe in the coming weeks.