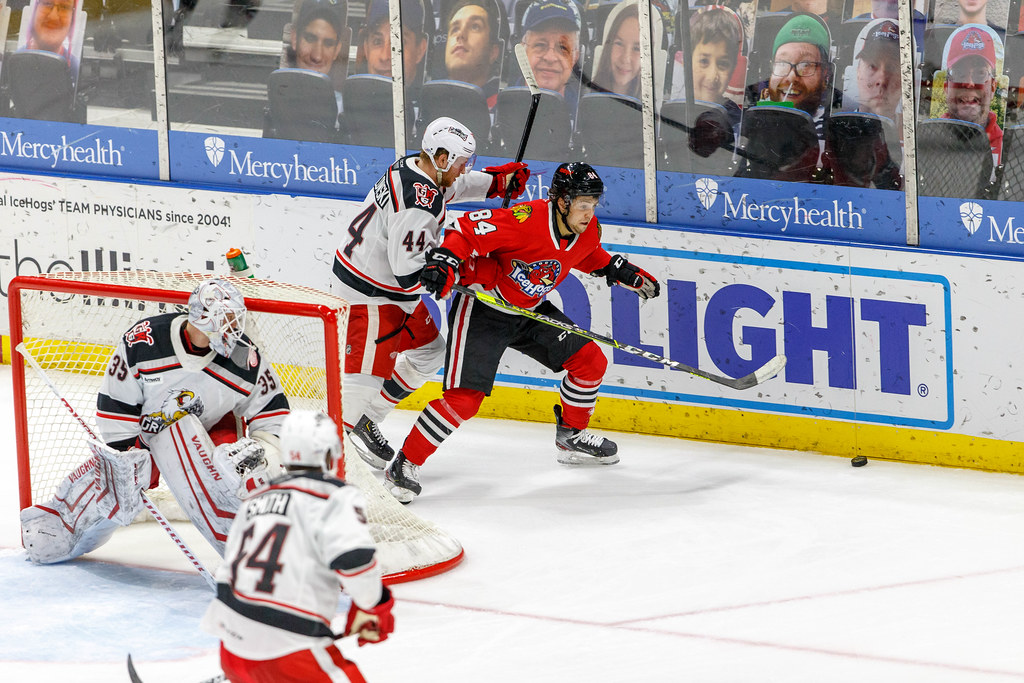 The Chicago Blackhawks AHL affiliate opened the 2021-22 campaign with six straight games as the visiting team. That ends this weekend

UPDATE (November 6, 3:00 p.m.) – It will be Anders Sorensen on the IceHogs bench this weekend. King was named interim head coach of the Chicago Blackhawks following the dismissal of Jeremy Colliton.

ROCKFORD, Ill. – The Rockford IceHogs have been road warriors all through the month of October. The Chicago Blackhawks AHL affiliate opened the 2021-22 campaign with six straight games as the visiting team. That ends this weekend.

The IceHogs (2-4) get the home portion of their schedule underway tonight. The BMO Harris Bank Center figures to be buzzing when Rockford hosts Grand Rapids at 7:00 p.m. Tomorrow, the Hogs welcome the Manitoba Moose to the Northern Illinois area for the first time in nearly two years.

After ending the road trip with a win over Texas, Rockford coach Derek King is loving life at home.

“It’s just so easy to get dressed and walk out to your ice and have a nice practice on a big ice sheet,” King admitted earlier this week. “It was good to get a win the second game (in Texas). I think just bringing it home after that, it just makes the whole week a lot easier and less stressful…let’s put it that way. Now we have time to prepare in our own locker, in our own home ice and be ready for the weekend.”

A Look at Grand Rapids

Grand Rapids had dropped four of its last five games, but posted an overtime win in Iowa Friday. The Griffins sit in fourth place in the Central Division standings with a 3-4-0-1 record.

The Griffins rolled past Rockford 6-1 in Grand Rapids in the season opener for both teams on October 15. The IceHogs let a 1-1 game slip away from them, surrendering three goals in the second period of that contest.

Joe Valeno, who scored for Grand Rapids on that evening, is up with the Red Wings at the moment. However, there are still several players the Hogs must hold in check in order to be in a position to win Saturday.

Riley Barber has six points (3G, 3A) on the season, as does center Chase Pearson (3G, 3A), who had a goal and a helper against the Hogs last month. Taro Harose has seven assists and is the team’s leader in points.

Veteran goalie Calvin Pickard is coming off an impressive win over Milwaukee Saturday, where he stopped 37 of 38 shots. In four games, Pickard has a 1.51 goals against average, a .955 save percentage, and he scored the win last night. Rockford could be shooting at rookie Victor Brattstrom (4.59 GAA, .844 save percentage), who is 0-2-1 after being torched for a half-dozen goals by the Wolves on October 31.

A View of the Moose

Manitoba holds the third-place spot in the Central with a 4-3 mark. The Moose will be playing for the third straight day when they face off with Rockford Sunday afternoon. This will be the first meeting between the Hogs and Manitoba since February 12 & 13, 2020, when the Hogs swept the Moose in Manitoba.

Mikey Eyssimont has four goals to pace Manitoba, while David Gustafsson (2G, 4A) tops the points list. Former IceHogs forward Luke Johnson has a goal and assist in five games with the Moose.

Most of the load in net has been carried by veteran Mikhail Berdin (3-3, 2.69, .893). However, Berdin is up with Winnipeg this weekend. Rookie Arvid Holm beat Grand Rapids 3-2 in a shootout to win his AHL debut and only appearance on October 24. He’ll be backed up by ECHL call-up Philippe Desrosiers. Depending on who is used in Manitoba’s first two games this weekend against Milwaukee and Chicago, Rockford could see either goalie Sunday.

What’s Up in Rockford?

Lucas Reichel is leading the IceHogs with five points (3G, 2A) in six games. King has been impressed with his rookie center, who was the Blackhawks first-round selection in the 2020 NHL Draft.

“He’s a skilled player,” King said. “He’s going to play in the NHL and he’s probably going to have a nice, long career. I think the big thing with him is just getting acclimated to playing this kind of hockey.”

Reichel started the season between Alexander Nylander (four goals on the season) and Brett Connolly (1G, 3A). King moved him to a line with Jakub Pour and Michal Teply this past Saturday.

“The problem is just trying to find the right players to play with him and the chemistry,” he said. “We’re still working on that.”

King stated earlier this week that rookie Arvid Soderblom would be starting one of this weekend’s games. He wasn’t certain which of his three goalies would be starting the home opener Saturday. If the rotation holds to form, Collin Delia will get his first start in a couple of weeks.

King was also looking forward to the improved facilities at the BMO Harris Bank Center, which started when the Blackhawks purchased the Rockford franchise this spring.

“All the time I’ve been here, we’ve always had some issues with the ice,” he pointed out. “It breaks up too much, or it’s just ruts, or it’s snowy. We had a pretty good, hard practice today and it held up really good, so I’m excited about that. Our locker room’s looking, you know, pretty much almost done, but it’s looking real good. I think once we get into that, it’ll be nice.”

The Blackhawks recalled defenseman Nicolas Beaudin on Thursday. Beaudin has three assists in five games with Rockford. He was reassigned to Rockford on Saturday morning. Chicago also assigned forward Reese Johnson to the IceHogs Thursday.

King’s club is being outshot 39-22, on average, this season. He’s looking to reverse that trend, starting this weekend.

“I think the big thing is, and we’re working on it, is just our d zone,” he explained. “We’ve been a little sloppy. I think we’re still getting used to it. We’ve got to take the thinking out of it and just react instead of thinking about where we need to be. We’re giving up a little too many opportunities there. We’ve got to clean up our neutral zone. I always love it when our guys can shoot a little more, but that’s not the issue. The issue is just cleaning up our d-zone and our neutral zone.”

King is also looking forward to a rematch with the Griffins to open up the BMO this season.

“There’s never an easy game in this league,” he said. “Grand Rapids is a good team, you know, but I think we owe them. We go in there (Grand Rapids) and they kind of gave it to us, so we’ve got to be ready for a game on our hands. I like where we’re heading. We’re going to have a good week of practices and prepare for them.”

Rockford drops the puck with Grand Rapids at 6:00 this evening. Game time for Sunday’s date with the Moose is 4:00 p.m.