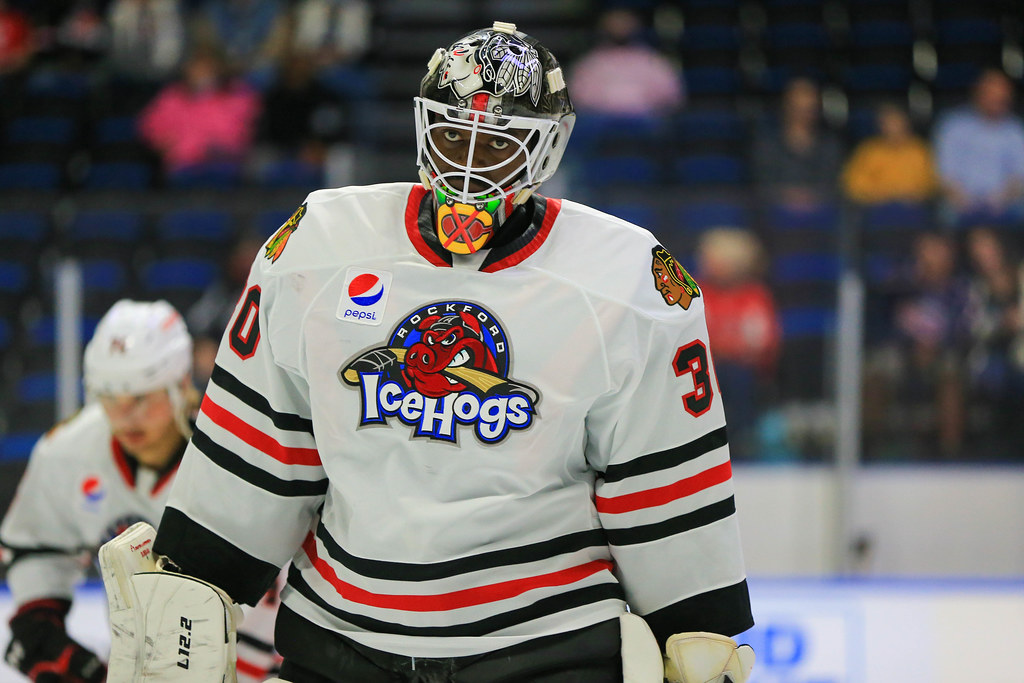 The Rockford IceHogs have had one too many goalies for the first two months of the season. Yesterday, their parent club finally did something about it

Malcolm Subban's trade to Buffalo is good for him, as well as for Rockford's other goalies. (Photo by Brad Repplinger/Rockford IceHogs)

ROCKFORD, Ill. – The Rockford IceHogs have had one too many goalies for the first two months of the season. Yesterday, their parent club finally did something about it.

The Chicago Blackhawks traded goalie Malcolm Subban to the Buffalo Sabres for future considerations on Thursday. Everyone should breathe easier now that the logjam in Rockford’s net has been cleared.

The IceHogs have been clumsily juggling starts all season, to the detriment of Subban and Collin Delia. Both players are capable of serving as a primary goalie in the AHL, yet Rockford was unable to get them the starts necessary to keep them sharp.

Ultimately, the professionalism of both players showed over the last couple of weeks. Delia returned from almost a month of inactivity on November 20 and has had two excellent outings. Subban was between the pipes Wednesday in Rockford’s 3-1 win in Milwaukee. Despite it being three weeks since his last action, Subban stopped 21 of 22 shots in what proved to be his swan song with the Hogs.

The Blackhawks likely figured that either Subban or Delia would be claimed on waivers back in October, solving their overcrowded crease issues for them. Instead, the IceHogs were forced to make the best of a bad situation.

This is the type of deal that really benefits everyone involved. Subban gets a chance to stick on an NHL roster, or at least more playing time in Rochester than he was getting in Rockford. Delia can continue to hone his game with regular work for the IceHogs.

Rookie Arvid Soderblom, who was getting half of the workload through the first two months, may start to see more back-to-back starts as the next step in his development. Rockford is in Grand Rapids Friday and Saturday. Soderblom and Delia will likely split those starts.

Some will lament that the Blackhawks aren’t getting much in return for Subban. The counter-point to that take is that Chicago was willing to lose Delia or Subban to waiver claims two months ago. Any “future considerations” are better than what they would have received before the season began.

What if Rockford loses either Delia or Soderblom to injury or a call-up? The Hogs have Cale Morris on an AHL contract waiting for his chance. Morris has a 2.79 goals against average and a .903 save percentage in 12 appearances with the ECHL’s Indy Fuel. He’d be a great fit as part of a tandem in Rockford if need be.

The trade of Subban to Buffalo is good for Subban. It’s good for Delia. It’s even good for Soderblom. Sometimes it’s good to have a little elbow room.