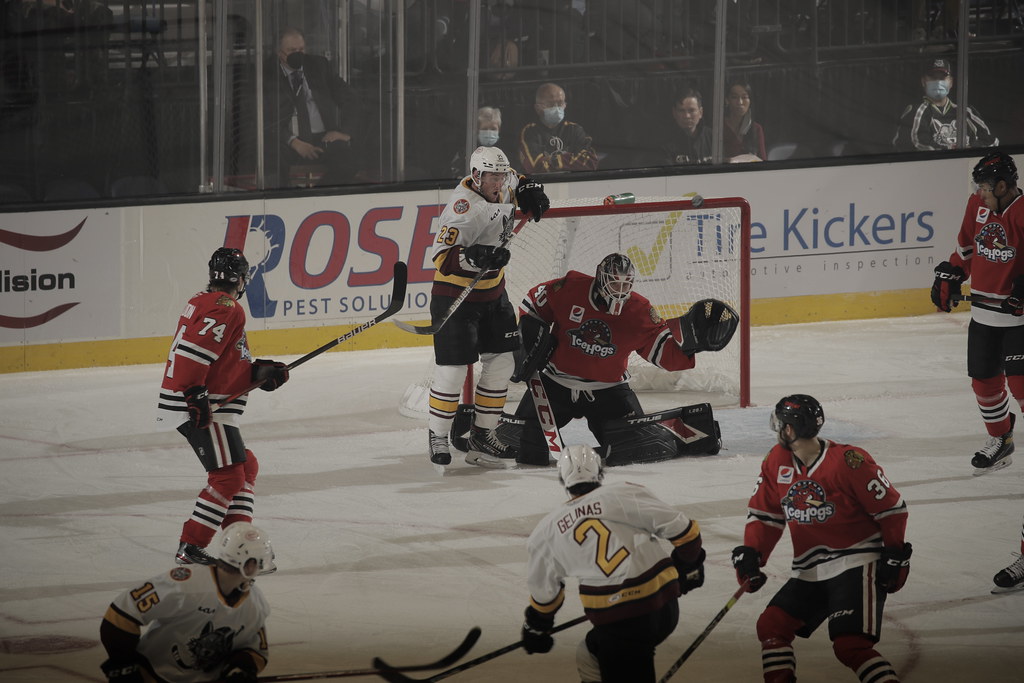 Rockford, Ill.-Rockford IceHogs coach Derek King has a problem in goal. The problem isn’t that the IceHogs lack a quality starter. They have three.

The Chicago Blackhawks had planned to have free-agent signing Arvid Soderblom develop into an NHL-quality goalie, with plenty of work in Rockford. The Blackhawks sent Malcolm Subban and Collin Delia through waivers before the start of the season.

It probably wasn’t part of the organization’s plans for both goalies to clear waivers and wind up with the IceHogs. Now there’s a three-person rotation in the Rockford net. It’s one too many to benefit the players involved.

Delia has been in Rockford for a good portion of his five-year pro career. He’s had some nice runs of success with the IceHogs, including anchoring a run to the Western Conference Final back in 2017-18. He’s also been prone to some slumps, like in the first half of the 2019-20 season.

Delia spent most of last season on the Blackhawks taxi squad, where he was little used. His luck hasn’t been much better with Rockford this season. He has just one start, a loss in which he gave up five goals to Iowa on 26 shots.

Subban, who backed up Kevin Lankinen in Chicago last season, has started twice for the IceHogs. He is currently 0-2, sporting a 4.57 goals-against average and a .842 save percentage.

The 22-year-old Soderblom, who earned a contract from Chicago with his play in his native Sweden, has both of Rockford’s wins entering November. He has faced a lot of shots from opposing teams; Soderblom posted 45 saves in the Hogs 4-3 win in Texas Saturday night. For the season, Soderblom is 2-1 with a 4.00 goals-against average and a .917 save percentage.

“Soderblom played great last game (against the Stars), I’ll give him that,” admitted King. “He was outstanding. If he wasn’t outstanding, we lose the game. The other goalies played well in front of us, too. They gave us an opportunity. We just didn’t have that extra jam to get those goals or get a lead for them.”

In an ideal scenario, there would be two goalies getting steady work for the IceHogs. Unfortunately, Rockford has one too many at the position right now. Any of the three could handle the bulk of the starts. There just aren’t enough starts to go around.

Those guys (Delia and Subban) haven’t gotten in rhythm at all. They’re kind of playing once every two weeks, which is hard to be fresh and be sharp,” King explained. “Also, we’ve got a team in front of them that’s not playing the way we should be playing and we’re still figuring our team out.”

King has been more concerned with the play in front of his goalies. The IceHogs are giving up more shots on net than any other team in the AHL – nearly 39 a game.

“I’m sure the first game Subi wishes he had a few of those goals back. I thought the second game he played he was really good,” he said. “We were just giving up too much quality chances. Even when Deals was in net, too many quality chances. Sodi goes in the net and we end up playing a little better in front of him and we get a few goals to give him the lead. It’s hard to judge; I don’t like to do that. We’re just, as a team, not right there playing well in front of them.”

The IceHogs open their home schedule Saturday night against Grand Rapids, who burned Subban for six goals in the season opener on October 15. King is still deciding how to split up the first two games of what will be a five-game homestand.

“Soderblom will most likely play one of them,” he said, “unless they tell me up top something different. I’m not sure who’s going to play the first game. Delia is actually the first in the rotation, but we’ll see. I have to talk to the big bosses and find out where they’re heading with this goalie situation.”

King explained that both Delia and Subban are handling the current situation professionally. There is no discord among the three goalies. However, this is a situation that needs to be solved sooner rather than later. If not by trading one of the two veterans, then perhaps a loan to another AHL team.

Neither Delianor Subban will be ready to step into net for the Blackhawks in case of injury. Soderblom needs to continue to get the majority of the starts. There is no denying the log jam in the IceHogs crease. Now, something has to be done about it.