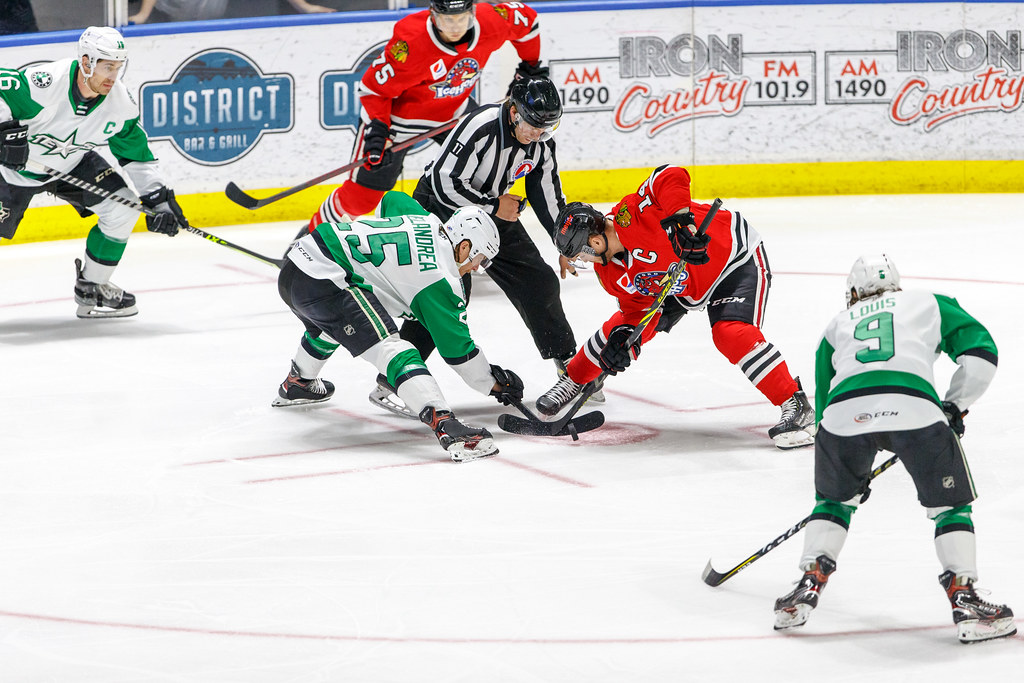 Rockford, Ill. – The Rockford IceHogs will venture away from the BMO for the first time in nearly a month. After going 3-3-0-1 in a season-long seven-game homestand, Rockford heads to Texas for a pair of games with the Stars.

“We like it here at home, for sure,” Hogs coach Anders Sorensen said at the team’s media session earlier this week. “We thought the crowd was great. Last weekend, taking three out of four (points), could have been four, but we got three out of four; it was positive. We’ll try to enjoy some Texas weather.”

The IceHogs are a bit healthier, particularly in net, as they fly down to the Lone Star State. Jaxson Stauber and Dylan Wells comprise the goalie tandem coming into the weekend. Stauber has recovered from an October 29 injury, while Wells was assigned to Rockford by the Chicago Blackhawks on Tuesday.

Mitchell Weeks, who backstopped Rockford’s last three games, was sent back to the ECHL’s Indy Fuel on Thursday. Owen Savory was released from his PTO on Tuesday. In addition to Weeks, center Cameron Hillis was also assigned to the Fuel.

The IceHogs offense is fifth in the AHL heading into the weekend. Rockford has been scoring at a 3.78 goals per game clip. Sorensen credited veteran players like Brett Seney (6 G, 7 A), David Gust (5 G, 8 A), Luke Philp (6 G, 3 A) and Dylan Sikura (2 G, 2 A) for the increased offensive numbers.

“There’s a lot of guys that are pulling on the rope offensively,” he said. When you have the guys who have been around a little bit and put points up at this level, it definitely helps. It helps the young guys and helps the whole group.”

As nice as the steady offense has been of late, Rockford has struggled to prevent action in its own end. The Hogs were 1-1-0-1 last week. The overall defense is 28th in the league, something that will have to improve in Texas.

The Stars have plenty of talented goal scorers, headed up by a player Rockford knows well from his days with Grand Rapids. Former Griffins forward Riley Barber (7 G, 5 A) leads the Stars in goals and points. Former IceHogs forward Tanner Kero (2 G, 9 A) and longtime captain Curtis McKenzie (4 G, 5 A) will be skaters to stop.

Texas will have a huge advantage in goal, with veteran NHL netkeeper Anton Khudobin (2.87 GAA, .907 save percentage) and rookie Matt Murray (2.00 GAA, .926 save percentage). Murray played very well for Texas in a short run late last season and helped get the Stars into a play-in series with Rockford.

First Look At The Stars

Texas (5-4-2-1) is tied with Manitoba for second place in the Central Division, though the Stars are 1-2-2 in their last five games. Last season, Rockford and Texas split eight games in the season series, including two road wins and two home wins for both teams.

This will be the first two of eight meetings with the Stars.

“We end up playing the same teams a lot,” Sorensen pointed out heading into the weekend. “Definitely, these first couple of games you want to see what they’re doing in certain areas of the ice, certain situations in games, and try to exploit that. At the same time, (there’s a) big focus on what we’re doing as well.”

Rockford and Texas open the weekend at the H-E-B Center in Cedar Park Saturday at 7:00 p.m. CDT. The action continues Sunday afternoon in a 5:00 p.m. CDT start.