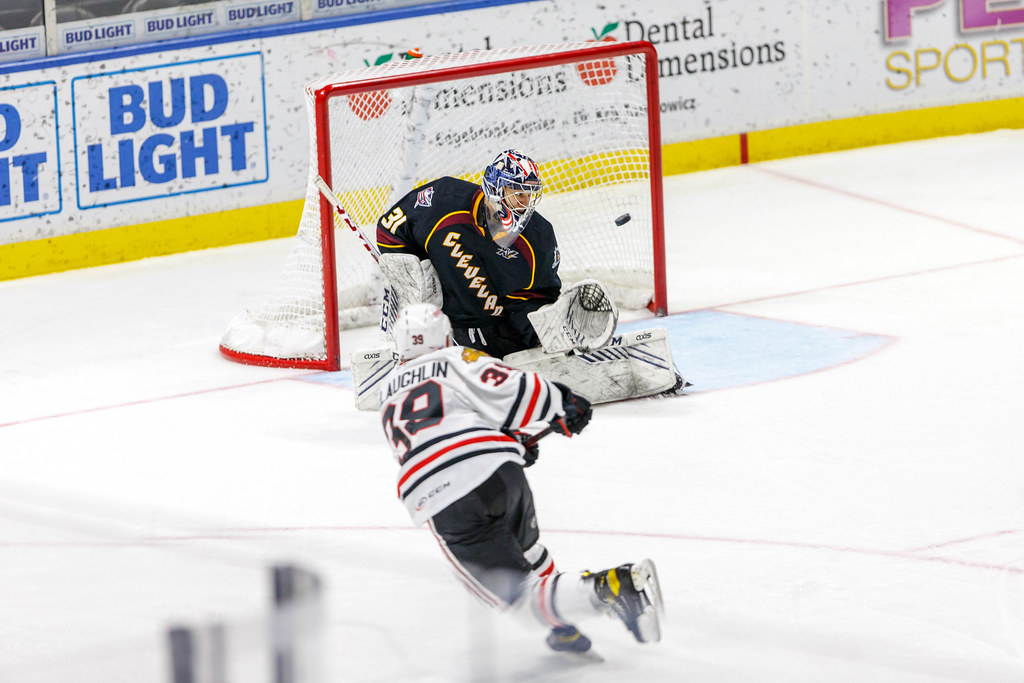 Both games were hotly contested, physical affairs that boiled over on occasion. The Hogs don’t complete the season series in Cleveland until mid-March

Dylan McLaughlin pushed his point streak to four games this weekend as the IceHogs split a pair of games with Cleveland. (Photo by Todd Reicher/Rockford IceHogs)

ROCKFORD, Ill. – The Rockford IceHogs split a pair of games with visiting Cleveland this weekend. Rockford was able to tie a season-high three-game win streak with a 5-2 victory Friday. On Saturday, the Monsters built a three-goal advantage, holding off a furious IceHogs comeback to prevail 5-4.

These were the first two of four meetings between the two clubs. Both games were hotly contested, physical affairs that boiled over on occasion. The Hogs don’t complete the season series in Cleveland until mid-March. That’s probably just as well, as some time apart should soothe some tempers.

The difference in how Rockford fared in the two games can be attributed to the IceHogs play in the defensive end. Friday, Rockford kept the Monsters in check and got a 33-save performance from Arvid Soderblom in his first start for the IceHogs in nearly a month.

In Saturday’s rematch, Cleveland capitalized on several turnovers to build a 5-2 lead in the first 40 minutes. That included a shorthanded goal seconds into the middle frame that put the Hogs on their heels. At the second intermission, Rockford was being outshot 30-16.

“Even yesterday (Friday), I thought we gave up a little too much in general off the rush,” interim coach Anders Sorensen said to the media after Saturday’s loss. “I think that hurt us big time in the first two periods.”

The IceHogs homestand continues Monday, when they take on the Chicago Wolves. Rockford dealt the Central Division leaders an 8-0 pasting at the BMO on January 7.

“We know them,” Sorensen said. “We know what they’re all about. They’re not going to be happy coming in here after what happened last game we played them here. We’ve got to be on our toes. We’ve go to be ready to work for sure.”

It’s a 1:00 p.m. Central time puck drop for the Hogs on Monday as they try to get a new streak going.