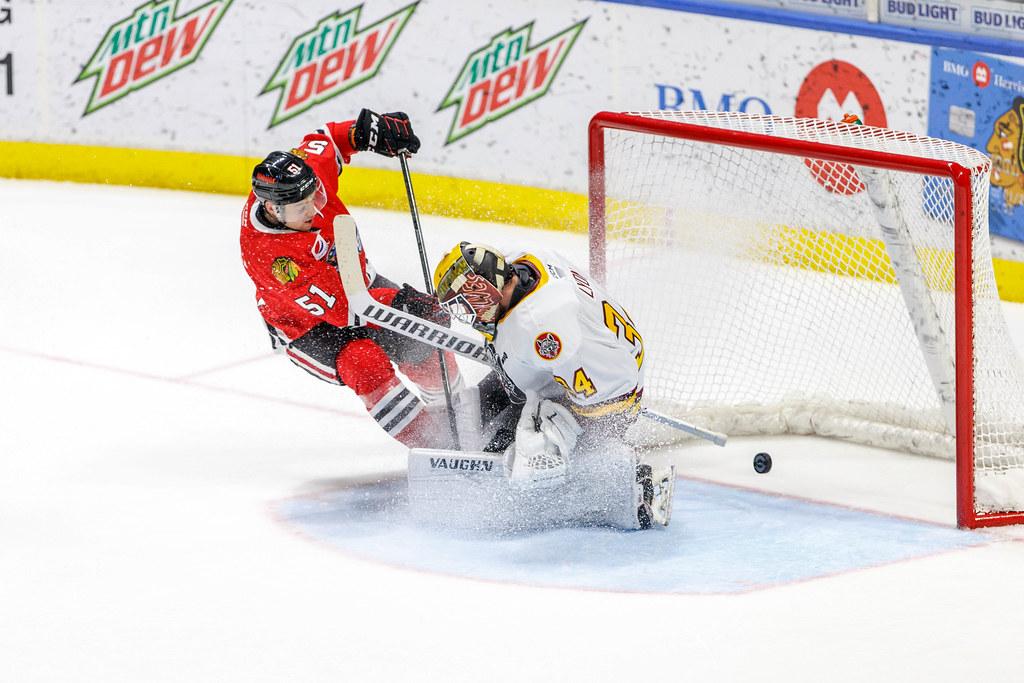 The Hogs found enough offense for the win, led by a pair of skaters in their return to the lineup.

ROCKFORD, Ill. – The Rockford IceHogs held off a third-period Chicago rally Friday night, besting the Wolves 5-4 in front of a packed house at the BMO Harris Bank Center. The Hogs found enough offense for the win, led by a pair of skaters in their return to the lineup. Rockford was outshot 47-23 on the night by the top team in the Central Division.

Michal Teply and Mike Hardman each made significant impacts against the Wolves. Teply, recently taken off of COVID protocols, helped the IceHogs build a 2-0 advantage late in the first period with a pair of goals. Hardman picked up a goal and two helpers in his return from an ankle injury.

The IceHogs went out to a 5-1 lead midway through the second period, when Issak Phillips, Hardman, and Ian Mitchell found the back of the net. Chicago starter Alex Lyon was then pulled from the game at 13:53 of the period in favor of rookie Jack LaFontaine.

Rockford would seldom pressure the Wolves net for the remainder of the contest. Meanwhile, Chicago started getting pucks past Hogs goalie Collin Delia. After David Gust got the Wolves on the board earlier in the period, Andrew Poturalski converted late in the second to close the gap to 5-2, heading into the second intermission.

Cavan Fitzgerald took a Poturalski feed into the slot and sent a shot over Delia’s glove to cut Rockford’s lead to 5-3 6:13 into the final frame. The ice was squarely tipped toward the IceHogs net; Rockford had to kill off multiple power-play chances in the last twelve minutes of action.

Chicago managed to get to within a goal, when Jamieson Rees knocked in a loose puck with twelve seconds left. However, the Hogs snuffed out the comeback bid in the final seconds.

LaFontaine didn’t see a lot of activity in his relief appearance but stopped all seven shots he faced to give the Wolves the chance to rally. Delia wound up with a 43-save effort for his seventh win of the season.

Poturalski led Chicago with a goal and two assists for the contest. Besides multi-point nights from Teply and Hardman, Mitchell had a goal and a helper for the IceHogs.

Rockford will now travel east to Rosemont to complete the home-and-home weekend. The two teams will face off at Allstate Arena Saturday at 7:00 p.m. Central time.