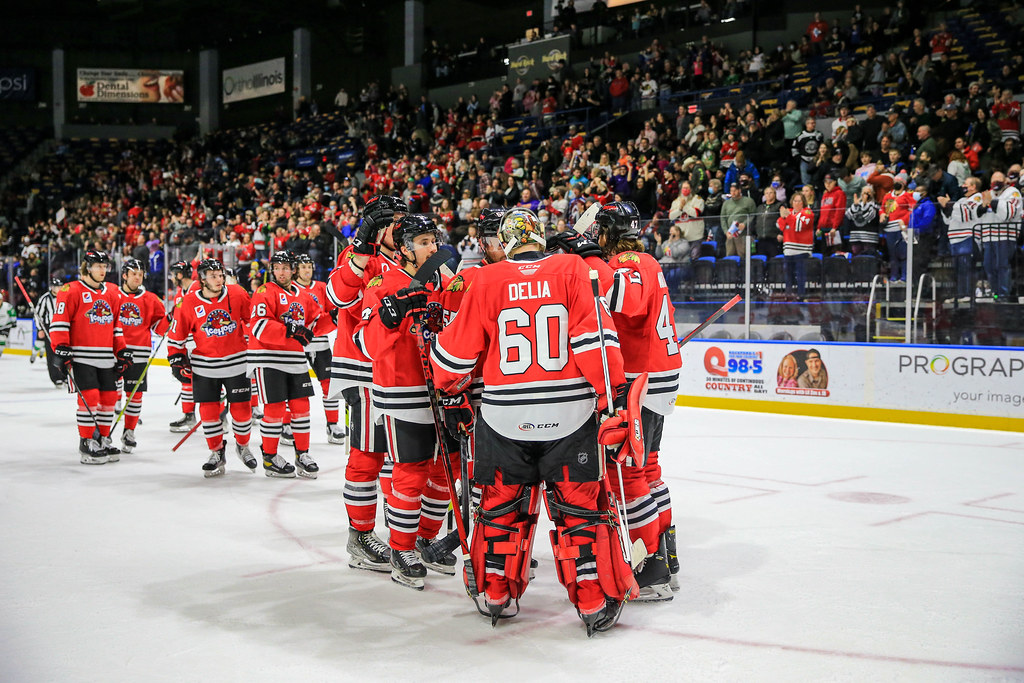 Rockford Will Be Road Hogs To Start March

Rockford Will Be Road Hogs To Start March

The IceHogs (22-20-3-1) currently sit in fourth place in the AHL’s Central Division with a .522 points percentage. Aside from the top two spots, the rest of the division is in a dogfight for position. Stringing together a winning streak this month could create some separation for Rockford-or one of its rivals.

March begins in Manitoba for the Hogs. The second-place Moose host Rockford on Thursday and Saturday. Manitoba has dropped six of its last eight games but is coming off a 4-3 shootout win in Chicago Sunday. In the lone meeting between the two teams this season, Lukas Reichel‘s hat trick paced the IceHogs to a 4-3 win in Rockford on November 7.

Like the IceHogs, the Moose have scored by committee this season and are solid in the defensive end. Defenseman Leon Gawanke leads Manitoba with 26 points (8 G, 18 A). Jeff Malott (14) and Cole Maier (11) top the Moose in the goal department.

Mikhail Berdin and Arvid Holm are currently manning the pipes for Manitoba heading into play Thursday. Holm came in midway through the first period of Sunday’s win and blanked the Wolves as the Moose rallied. Berdin struggled in his first game action in a couple of weeks in a 5-1 loss to Chicago on February 26. However, he is sporting a 2.44 goals against average this season.

With Arvid Soderblom and Collin Delia playing well in net for the IceHogs, the two games with Manitoba could be low-scoring affairs. Neither team is a stranger to overtime; in fact, Rockford is 6-1 in shootouts this season. The Moose are 4-1 when games are decided by penalty shots.

The road trip continues for Rockford next weekend, with a March 11 date in Milwaukee followed by the first of two games with Cleveland March 13. The last game on the jaunt comes March 15 against the Monsters.

IceHogs forward Dylan McLaughlin (6 G, 19 A) is still on concussion protocol and won’t play this weekend. Rockford did get forward Josiah Slavin and defenseman Issak Phillips back from the Chicago Blackhawks on Sunday. The IceHogs made some moves this week, sending goalie Cale Morris and defenseman Jacob LeGuerrier to the Indy Fuel of the ECHL on Tuesday.

Posting wins over Manitoba and Milwaukee are key to Rockford’s playoff fortunes. At this stage of the season, racking up points is the goal. Doing so against the two teams ahead of you in the standings is a fringe benefit.

The action gets underway for the IceHogs at the BellMTS Iceplex at 7:00 p.m. CDT on Thursday. Saturday’s tilt is a matinee, with the puck drop scheduled for 2:00 p.m.