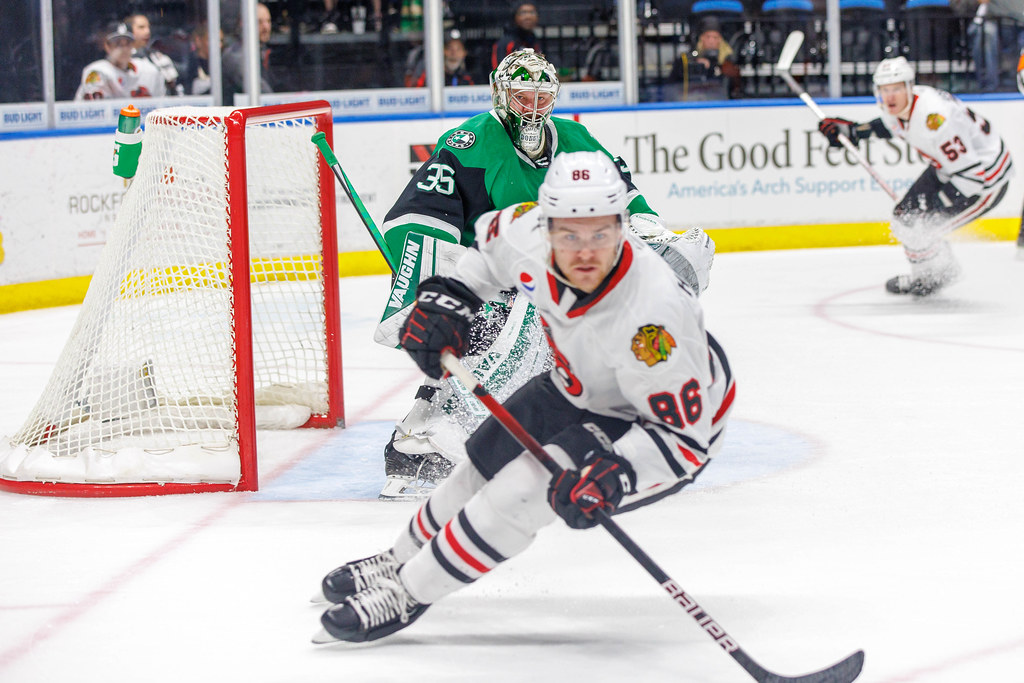 Rockford’s Hardman Looking To Get Back Track Offensively

#AHL | After a big offensive season last year for the @GoIceHogs, Mike Hardman is looking to get back to last year’s form. @FPHIceHogs explains more

Rockford’s Hardman Looking To Get Back Track Offensively

ROCKFORD, Ill.-Rockford IceHogs forward Mike Hardman was one of his team’s leading goal scorers in the 2021-22 season. In his first 25 games for the Hogs, Hardman had 13 of his 19 goals that season. The puck has bounced very differently for the second-year pro in the first half of 2022-23.

Hardman picked up a goal in the first period of Rockford’s 2-1 overtime loss in Iowa on January 7. It was just his second of the 2022-23 campaign. The goal broke a 17-game drought dating back to October 29.

Tied game thanks to Hardman👏👏👏 pic.twitter.com/9KETIdd7ib

“It was obviously nice to get a goal this weekend,” Hardman explained at the IceHogs media session Tuesday, “but I feel like I’m getting a lot of scoring chances and the pucks just haven’t really been going in for me. It happens to a lot of players.”

In 25 games this season, Hardman, a 6’2″, 205-pounder, has two goals and ten assists. Though the goals haven’t come as easily as they did a year ago, Hardman has had opportunities.

“I feel like I’m getting those scoring chances,” he said. “We have 38 games left, so I feel like there’s a ton of hockey and, you know, the second half you can get real hot. It’s definitely a little frustrating for me because I feel like last year, pucks were going in and my numbers, obviously were a little bit higher.”

Hardman’s shooting percentage is a paltry 4.3 this season, compared to 18.3 percent in 2021-22. This is a telling stat, coupled with the roles he and Josiah Slavin, who was right behind him with 18 goals, have been asked to play of this year’s veteran-laden Hogs.

“It was nice to see Hardman score, for sure, over the weekend,” said Rockford coach Anders Sorensen. “I think that their roles (are) a little bit different this year. Last year they maybe had more offensive roles within the team. Obviously now we’re bringing some guys in from the outside that’s taking on those roles and done well with it. Their opportunities on the power play, their opportunities five on five, offensive zone starts and stuff like that hasn’t been as high as it was last year, so it’s kind of natural that the production slips a little bit.”

Slavin has been in more of a checking role in the first half of the season. He’s been a solid penalty killer and has generated several shorthanded opportunities for teammates as well as himself. However, Slavin has just one goal and six helpers and has seen his shooting percentage fall from 22. 2 percent last season to 3.3 percent in 34 games this season.

The IceHogs lost two of their more potent playmakers last week when Lukas Reichel and Brett Seney were recalled by the Chicago Blackhawks. It is common for AHL rosters to be in flux throughout the season. When top scorers depart, other skaters have to step up. Hardman hopes to be one of those players for Rockford in the coming weeks, starting this weekend in Colorado.