CLEVELAND – Giving back. Community. Hockey. These are three ideals that empower the Cleveland Monsters organization throughout every season. It’s also the pillars that shape and drive young cancer survivor and Medina Hockey Club goalie Ryan Kuchta.

Recently, Kuchta was honored as the Cleveland Monsters took on the Milwaukee Admirals at the Rocket Mortgage FieldHouse. While it was a happy and ceremonious moment to the public, this special partnership had been years in the making.

Kuchta’s relationship with the Monsters started back in 2018 when he was visited by Nathan Gerbe, Tommy Cross, and Brad Thiessen while in the hospital battling T-cell lymphoblastic lymphoma. In fact, it was Cross that gave Kuchta his nickname of “Cookie.”

Then, on April 9, 2019, A Special Wish Foundation partnered with the Monsters to sign the young 12-year-old goalie to a one-day contract.

Since then, Kuchta and the Monsters have formed their own community. He’s been particularly close with Thiessen, who now serves as the goaltending development coach for the Columbus Blue Jackets. It’s been said that hockey is a brotherhood. Perhaps no closer brotherhood can be found than that of goalies.

So, it’s no surprise that Kuchta and Thiessen have a bond that unites them still to this day, which he commented on:

“We just kind of had a connection because we are both goalies. We still text today. He’s been to practice with me. We skate on the ice together. I’ve (gone) to their practices and watch them out on the bench and stuff. We kind of still talk and he checks on me to see how I’m doing.”

As Kuchta’s battle progressed, so did his relationship with the Monsters. So, it’s no surprise that when he was declared cancer-free, that it would just continue to grow.

That is why, on Saturday, December 4th, the Monsters, A Special Wish Foundation, and the Kuchta family came together to celebrate a strong and special young man. And what better day to do it than on National Cookie Day.

It’s #NationalCookieDay and tonight’s #MILvsCLE match is all about @aspecialwishcle and Ryan “Cookie” Kuchta. Want to give support the cause? Pick up some #HockeyStrong gear or try out the yummy cookies made by Ryan and Michael Symon! pic.twitter.com/eGczdLN0nc

Though, the idea for this day originally started with Kuchta. He wanted to find a way to give back to the foundation that granted his wish and ensure that future kids would have their own chances.

Eileen Lane, executive director of A Special Wish Foundation in Cleveland, shared that this was a unique idea and how appreciative they are of Kuchta and everyone that came together to make the National Cookie Day game happen.

“We’re just above and beyond grateful. We say it all the time that this child, Ryan, is so mature, he’s beyond his years. And it’s not every day that a wish kiddo turns to you and says, ‘Okay, now I want to help other kids now that I’ve gone through this.’ And we’re just grateful for that. It’s inspiring, and his passion really shows.”

The Monsters were on board with the idea immediately, as they consider Kuchta one of their own.

While the symbol of the day was centered on cookies, it was the words “Hockey Strong” that bonded a community on Saturday night. 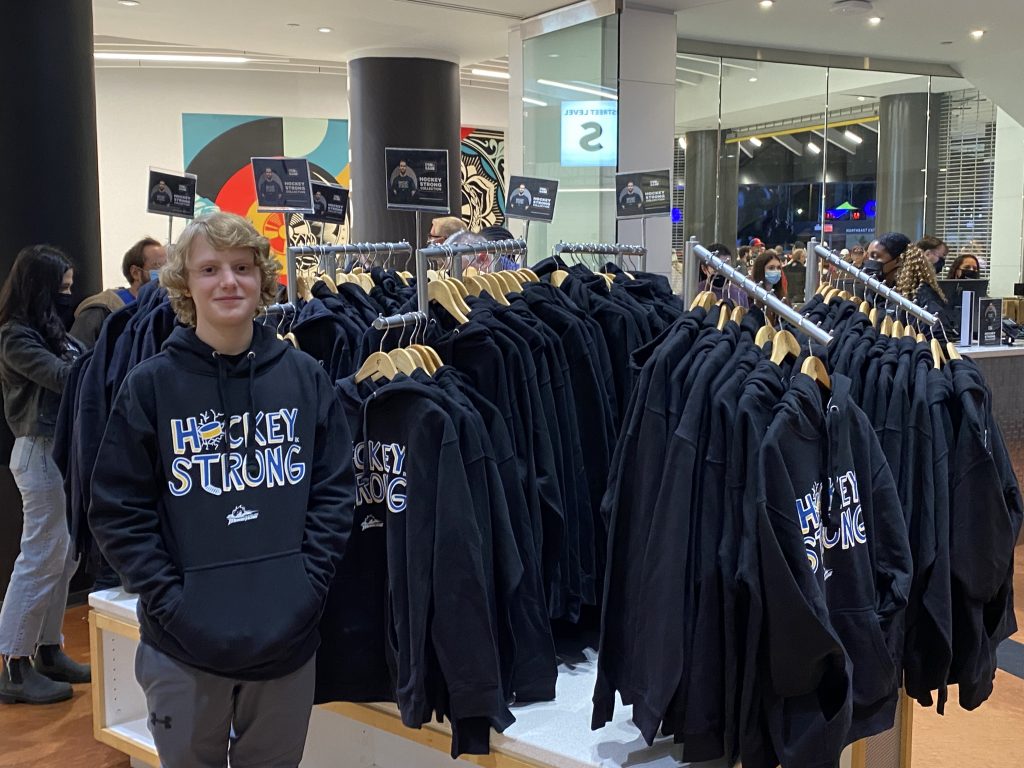 For Kuchta, “Hockey Strong” inspired him in his cancer fight. As he explained it, his doctor told him to take on cancer like hockey players take on a game.

“Hockey players are strong and tough. They have to be to play the game. So, I came up with the saying ‘Hockey Strong’ because they’re tough and you have to be tough to take on cancer.” – Kuchta

So, when he was offered to design his own clothing to sell at the game to also benefit A Special Wish, Kuchta knew immediately that his saying would take center stage. He drew up a few ideas and worked with the Monsters’ design team to bring the design to life.

Now, all of this originally started as an idea by Kuchta to create a cookie to sell as a way to give back to A Special Wish.

“My last name is Kuchta,” he sheepishly grinned.

That’s when A Special Wish went to work. They got in touch with celebrity chef Michael Symon, who is from Cleveland and has a long history of partnership with the foundation.

“Michael Symon has been incredible to A Special Wish. When he first opened Mable’s (BBQ), he actually invited our wish kiddos to be some of the first customers… which is incredible. Mable’s also donates to our food drop program once a month for our wish kiddos that are inpatient in the hospital. So, partnering Ryan with Michael Symon was a no-brainer for us.” – Lane

Symon and Kuchta set off to create a cookie masterpiece. In hockey, sometimes it takes a bit of fine-tuning to get the lines right. Coming up with a cookie was a bit of a similar process.

Kuchta grinned ear to ear and laughed as he recalled his time with Symon:

“We tried a lot of stuff. Some of it wasn’t as good as the others, like with gummy worms, Twizzlers, and stuff. We decided that chocolate chips and sea salt would be the best option. Then going to this apartment and actually cooking with him was awesome. I learned a lot of things.”

You’ll actually find the cookie recipe at the bottom of this article if you’d like to try making them yourself.

And with that, all of the pieces were in place for a magical and special National Cookie Day celebration. With Kuchta’s merchandise and cookies all set up for sale, the doors opened at the Rocket Mortgage FieldHouse.

For Lane, it was a surreal moment:

“I know the kiddos that it’s going to go to firsthand. So, it makes me emotional. We have over 300 wish kiddos here in Northeast Ohio getting cared for at Cleveland Clinic Children’s, Rainbow Babies, and in Akron Children’s. So, just to know that this money is going to go back towards one of those kiddos, and we get to grant even more wishes in the future… It’s honestly, I never thought we’d be in this day experiencing this. We’re getting bigger and bigger, and we’re getting stronger and stronger as a foundation. And that’s really cool to see.”

For Kuchta, all of his fighting, hard work, and dedication culminated in the lights down on the ice at the Rocket Mortgage FieldHouse. Flanked by Milwaukee Admirals captain Cole Schnider and Cleveland Monsters alternate captain Justin Scott, he ran the ceremonial puck drop. 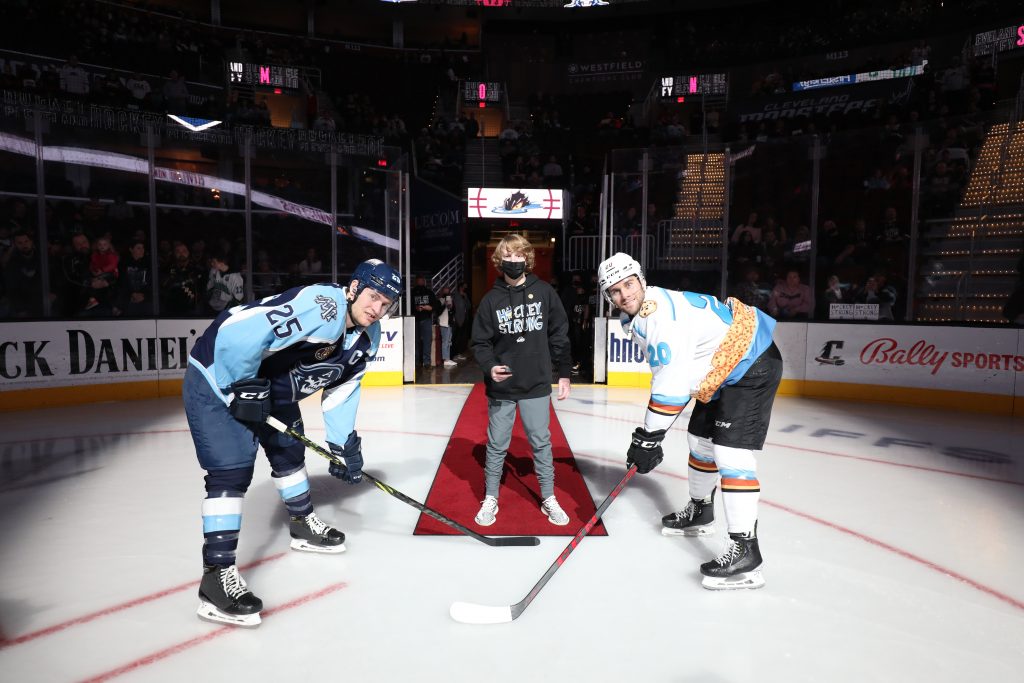 As Kuchta walked back into the shadows of the Zamboni tunnel to be reunited with his family, you couldn’t help but feel the pride, love, and care that the Cleveland hockey community embraced this young man with… a community that received their love and help back in spades from one young hockey goalie.