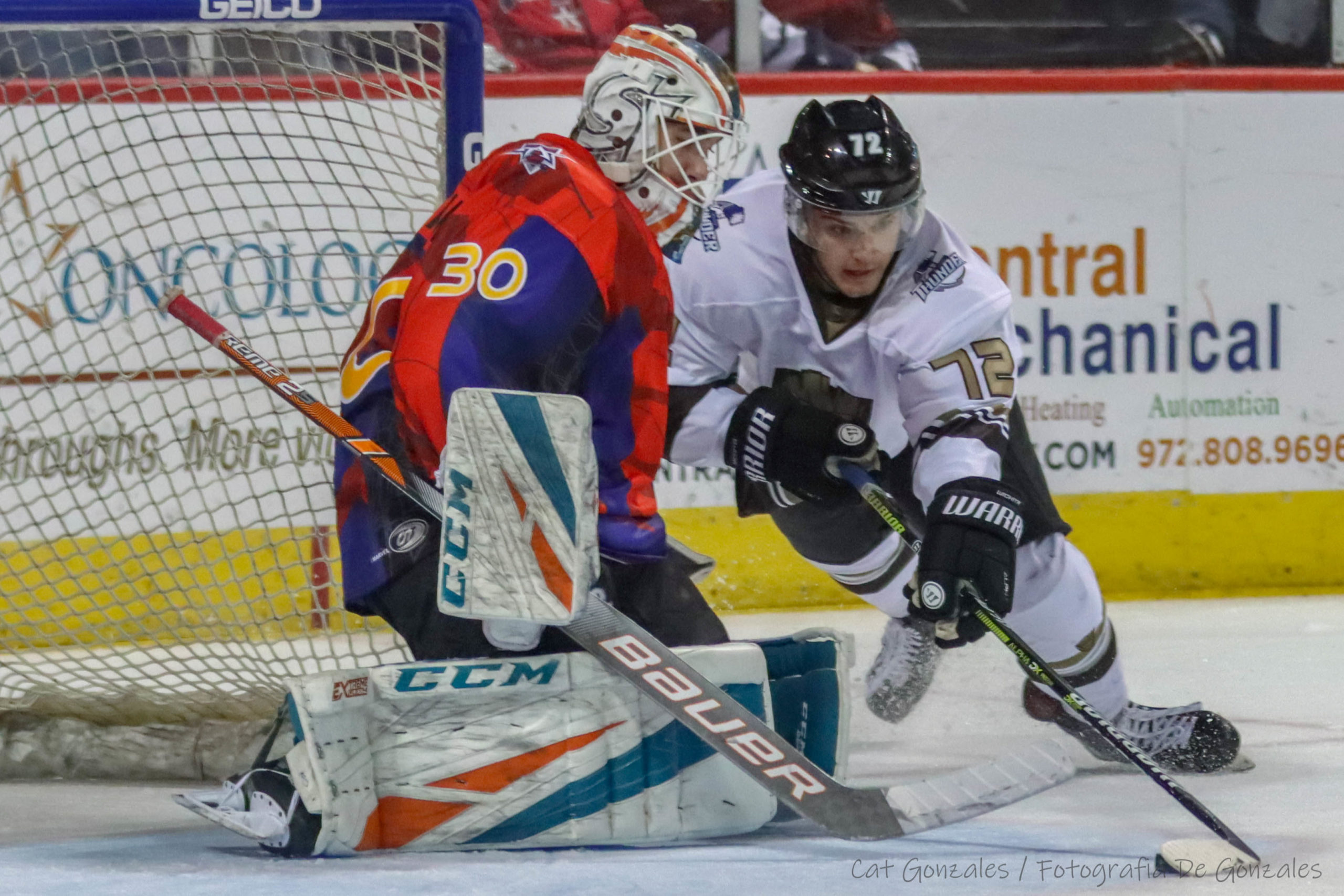 Safin Scores in Overtime to Lift Wichita Over Allen

ALLEN, Texas –  It was a near complete game effort from the Wichita Thunder on Saturday as they avenged the rough outing from the night prior.

Safin Scores in Overtime to Lift Wichita Over Allen

ALLEN, Texas –  It was a near complete game effort from the Wichita Thunder on Saturday as they avenged the rough outing from the night prior. Wichita defeated the Allen Americans 3-2 in overtime to take two crucial points on the road.

Wichita set their pace and style early and did not let Allen find a rhythm.

“We wanted more energy,” Head coach Bruce ramsay said. “We wanted to manage the puck better…They have a very skilled team and they will take advantage of your mistakes.”

The Thunder got things started early yet again, taking a 1-0 lead just 3:40 into the game as Cameron Hebig scored his third goal in four games. Similar to Friday night, Hebig made a nice move in front of the goaltender (this time Zach Sawchenko) to open up the scoring chance.

The physicality of the Thunder showed significantly through the opening frame of play, laying nine hits in the first six minutes of the game.
Wichita held the lead into the first intermission, outshooting their opponent after one period for the second straight night. The Thunder totaled 15 hits in the first, obviously showing drive to be more physical than the night before.
The second period began as the first period ended with back-and-forth hockey. Both Sawchenko and Evan Weninger made big stops in the process. Among the stops was a huge heads up play by Brendan De Jong and Riley Weselowski to help Weninger out after a puck leaked through.

The Thunder doubled their lead after the halfway point in the game as Peter Crinella scored after a beautiful feed from Jason Salvaggio behind the net at 12:28 in the second period.

Wichita continued the incredible defensive second period, carrying the 2-0 lead into the intermission. The Thunder tallied 15 blocked shots in the second period alone, many of which came on the lone Americans power play in the second.

“It is huge,” Ramsay said about the importance of having players willing to lay their body on the line to block shots. “It is the new age of hockey.”

The déjà vu began to sweep over the Thunder just 2:17 into the third period as Jared VanWormer scored a power play goal to cut Wichita’s lead in half, sending teddy bears flying to the ice. This began an almost 10-minute clean up process, giving the Thunder defense some time to rest.
Following a couple minutes of stalemate, Olivier Archambault tied the game at 2-2 after a great set up pass to the slot by Josh Sadek.
30 seconds following the goal, Beau Starrett had a breakaway attempt broken up Sawchenko after a slight hook in the slot. After the referees gathered, Starrett was awarded a penalty shot. Sawchenko met the challenge and stopped the penalty shot to keep the game knotted at 2-2.
Each side would get a power play opportunity with under five minutes remaining in regulation but neither capitalized, sending the game to overtime. Allen would get to start the overtime frame with a man advantage for 35 seconds.
The game saw controversy in the eyes of Americans fans two minutes into the overtime period as Allen believed they had scored on a bar-ringer. The referees called it a no goal before deciding to look at the video replay. After about two minutes of discussion and watching, the referees confirmed it was a no goal and the game would continue.

Wichita took the no goal as a spark to their fire, winning the following faceoff and traveling 200 feet before Starrett took an initial shot that left a rebound all alone for Ostap Safin, who scored his fifth goal of the year to give Wichita the win.

Allen outshot Wichita 41-35, but that is the only thing Allen would claim. The Thunder won 39 of the 76 faceoffs, outhit the Americans 48-34 and blocked 28 shots to Allen’s eight.
Allen finished 1-for-6 on the man advantage while Wichita finished 0-for-2.
Weninger earned the win with a 39 save performance. Sawchenko received the loss after making 32 saves on 35 Wichita shots.

“At the end of the day, I just need to do my job and stop the puck,” Weninger said. “I went out and tried to play my game and hoped the team plays their game in front of me and it worked out tonight.”

The two teams reconvene for a final time this weekend on Sunday afternoon back in Wichita. Puck drops at 4:05pm CT.
For the very latest news on the Wichita Thunder, follow us on Twitter (@SinBinThunder). And for the latest news on the SPHL, ECHL, and AHL, follow @SinBinNews.