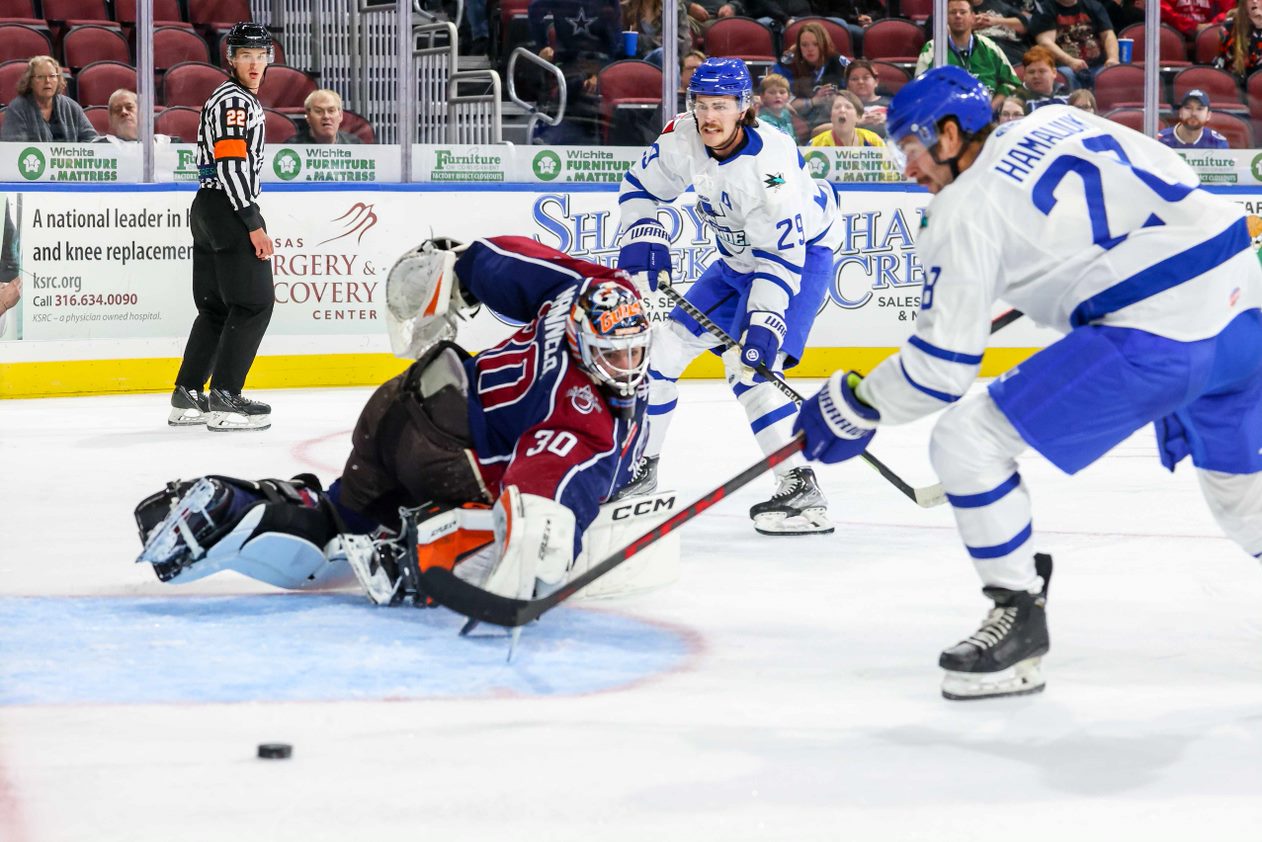 The Tulsa Oilers and Wichita Thunder met for the first of eight meetings in the next five weeks Friday night at INTRUST Bank Arena.

WICHITA, Kan. – The Wichita Thunder may have a 158-151-37 all-time record against the Tulsa Oilers, but they have struggled against the Oilers during the Bruce Ramsay era. Friday night, the Thunder called in reinforcements from the American Hockey League.

The Tulsa Oilers and Wichita Thunder met for the first of eight meetings in the next five weeks Friday night at INTRUST Bank Arena. It also marked the ECHL debuts for forward Dillon Hamaliuk and goaltender Strauss Mann, who are with the Thunder thanks to the team’s affiliation with the San Jose Sharks.

For the second game in a row, it took the young Thunder a while to get their sea legs under them. And similar to their game against Allen last weekend, it cost them. Eddie Matsushima opened the scoring with his first goal of the year just 2:04 into the contest, tipping home a blueline shot from Karl Boudrias beat Mann to give the Oilers a 1-0 lead. Just 49 seconds later, J.C. Campagna picks the pocket of Billy Constantinou, and he fed Alex Gilmour for his first of the year to double the Oilers lead.

“We were terrible [in the opening ten minutes], I’ve gotta be honest,” Ramsay said. “If we play that way in the future it’s gonna not be pretty for us. We didn’t help out our goaltender, turning pucks over, it seemed like the guys were pretty nervous. There were a lot of teaching points in that first ten minutes.”

It took Wichita a little longer to check into the contest, but they did, managing to get some sustained pressure on Oilers netminder Daniel Mannella in the backhalf of the first period.

Brayden Watts has been the catalyst for the Thunder offense to start the season, a trend he continued. His goal, just 1:47 into the second period, came off a cross-ice feed from Hamaliuk, who found Watts in-stride and he beat Mannella upper corner to cut the Oilers lead in half.

The Oilers would seize momentum back almost two minutes later, when Jack Doremus found the puck in a scramble in front of Mann and beat the rookie goaltender to make it 3-1 Tulsa.

From there, it was all Wichita.

Just 14 seconds into the third Wichita power-play of the evening, Timur Ibragimov scored his first ECHL goal, picking up the puck off the far wall and sniping it past Mannella to narrow the Oilers lead to 3-2.

“He can create offense, does a lot of good things in the offensive zone,” Ramsay said of the second-year forward. “He’s been a great, positive kid. He works hard and he wants to get better. He’s learning the North American way. He hasn’t spent a lot of time in North America where a lot of Europeans play junior and get used to that style of play and for him it’s been a lot different. He’s an unbelievable kid.”

The power play remained hot for the Thunder and struck again minutes later. In a reversal from the first goal of the second period for the Thunder, this time it was Watts finding Hamaliuk for his first ECHL goal and levelling the game at 3-3 through 40 minutes.

After coming up empty on their fifth power play of the evening, Bray Crowder fired a shot from the blueline that was tipped by Jay Dickman and onto the stick of Stefan Fournier, who put it past Mannella to give the Thunder their first lead of the season at 4-3 in the mid stages of the period.

Then, things got chippy.

Zack Hoffman smoked Tyler Poulsen as he was coming across the middle of the ice, leaving Poulsen wobbly-legged as he left the playing surface. The end result was Hoffman being assessed a five-minute match penalty, with a possible suspension looming. During the five-minute major power play, the Thunder allowed Tulsa to get pucks on net, five during the man-advantage, but Strauss Mann was the equalizer for the Thunder, holding the Oilers at bay.

Hamaliuk would score his second goal of the evening with 2:07 left to salt the game away for the Thunder, giving them a 5-3 lead.

For the second time in as many games, Thunder goaltending again doubled as crash test dummies for players who apparently don’t know how to stop. Max Golod steamrolled Mann with just over a minute left, earning him a five-minute major and an early shower.

Wichita won the contest, 5-3, and now improve to 1-1-0-0 on the season. They head to Allen for two of the next three games, before returning to play Allen next Friday night at home.