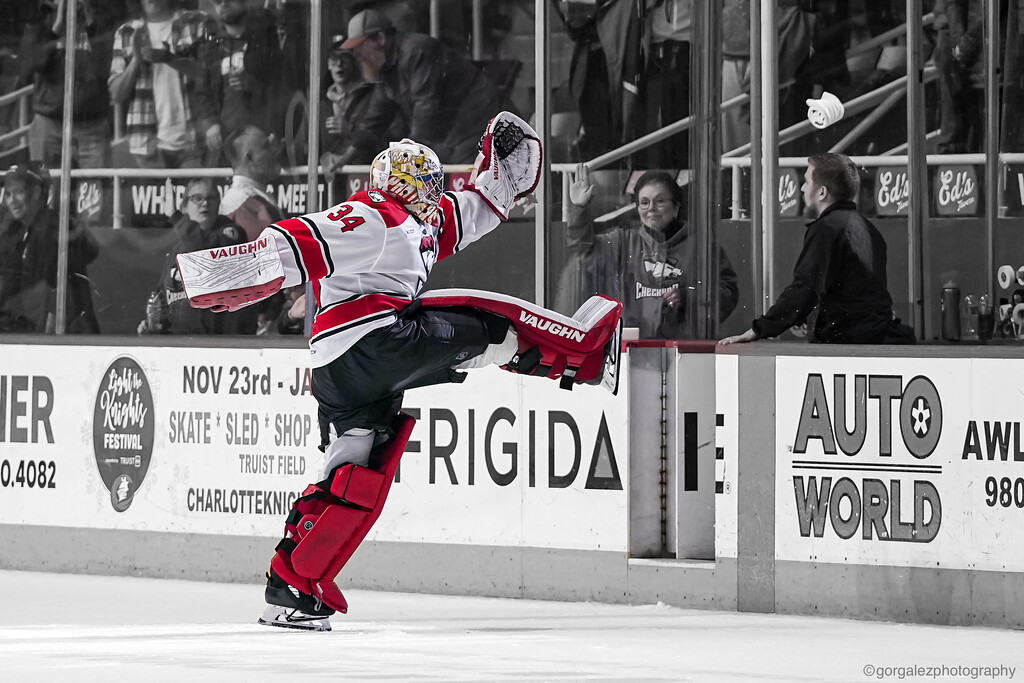 CHARLOTTE, N.C. – The Charlotte Checkers travel to Cleveland, Ohio to wrap up the 2022 portion of the season with two games against the Cleveland Monsters. This will be the first time the two teams will face each other this season. Last season the Checkers had a 2-1-1-0 record against the Monsters while Cleveland carried a record of 2-2-0-0. In the previous five seasons, the Checkers had a 10-4-2-0 record compared to the Monsters’ 6-8-2-0.

Currently, the Checkers have a record of 14-11-2-1 with 31 points on the year. That places them fifth in the Atlantic division tied with Wilkes-Barre Scranton, who has the tiebreaker. Cleveland, on the other hand, has a record of 12-11-1-2 with 27 points. That places them fifth as well in the North Division – one point behind the Utica Comets. The games will be played on Thursday, December 29th, and Sunday, December 31st.

Going into the two games this weekend, these are the players from both teams that Checkers fans need to keep an eye on:

The first player for Charlotte Checkers fans to keep an eye on from the Monsters is forward Trey Fix-Wolansky. In his last five games, Fix-Wolansky has one goal and five assists for six points. Also, he leads the Monsters this season with points (29) although he is tied for assists (17) along with Emil Bemstrom, who is currently up with the Columbus Blue Jackets. In his fourth season with the Monsters, Fix-Wolansky looks to try to crack a Blue Jackets lineup that he’s only managed to play in 10 games in the last two seasons. Currently, Fix-Wolansky is averaging 1.38 ppg in 21 games this season. Compared to other forwards in the AHL, he is a small player but very quick along with being a strong force on the puck. Fans of the Monsters would consider him a heart and soul guy.

Fix-Wolansky’s 29 points on the season so far in 21 games played could make a case for him to be called up. But, his 12 goals and 17 assists could be an asset for the Monsters who have been up and down for the last couple of weeks. If the Checkers can manage to keep Fix-Wolansky in check, there is a chance for the team to limit the Monsters’ chances over the series. Fix-Wolansky is not one guy to not sleep on this season.

The second Monsters player to keep an eye on is Hanson, Mass. native Billy Sweezey. In his second season with the Monsters, he has only accumulated eight points, all assists, in 23 games played. Sweezey in his rookie season last year finished with four goals and seven assists for eleven points in 70 games played. It seems like he is on pace to make a new career high in points while already having a new high in assists. According to fans, Sweezey is a guy who is never afraid to get into a brouhaha and lay heavy hits on opponents. He is still a young defenseman trying to make a name and a place for himself in the AHL, not the most solid guy but has room to grow.

The Monsters will have to lean heavily on him this season with most of the Monsters’ defensive core at the World Juniors or just out of the lineup in general. If the Checkers can get under Sweezey’s skin and make him take unnecessary penalties, it could give the team more room to play their game. Taking Sweezey out of the equation could be beneficial for the Checkers’ small winning streak to continue during and possibly after their trip to Cleveland.

The final player for fans to look out for in the series is West Vancouver, BC native Jake Christiansen. In his third season with the Monsters, Christiansen has four points, all assists, in eleven games played. For context, he was just sent back down from the Blue Jackets where played 17 games for the big club. He accumulated two assists over that span while in Columbus. Although, Christiansen is no stranger when it comes to racking up points. In 62 games played last season for Cleveland, Christiansen had 13 goals and 32 assists for 45 total points. While isn’t a huge goal scorer, he knows how to be a playmaker and set teammates up for goals.

The Monsters look to also lean heavily on Christiansen and Fix-Wolansky with Bemstrom up in Columbus. Just like with Fix-Wolansky, if they can keep the Monsters’ huge playmaker in Christensen in check, they have a solid chance to win either one or both games coming up. It all comes down to the Checkers’ defense of keeping Christiansen off the scoresheet along with just shutting him down as a whole. If so, it will be a long series for the Monsters. 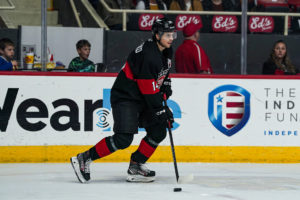 The first Checkers player that fans need to watch for this series is Russian forward Grigori Denisenko.  On Tuesday, December 27th, the Florida Panthers sent back down Denisenko after playing in a few games for them the last couple of weeks. While with the Panthers, Denisenko accumulated one assist in six games played. Although, with the Checkers, this season Denisenko has three goals and eight assists for eleven points in 24 games played. For the Checkers, getting Denisenko back in the Top Six is huge for them. Before the sweep against the Providence Bruins last week, the Checkers were on a five-game losing streak. Although, getting Denisenko back after a sweep will boost the Checkers going into the series against the Monsters.

If Denisenko and the Checkers keep the momentum going against a Cleveland team that not only has lost three straight but is also 4-5-1-0 in their last ten games; it’s a good chance that the Checkers could extend their winning streak. It will come down to Denisenko meshing back with a lineup that outscored the Bruins 7 to 3 at home last week. 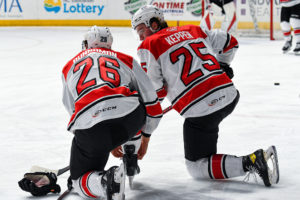 The second player that Checkers fans need to watch from their team is Guelph, Ontario native Connor Bunnaman. While Bunnaman only carries four points, all goals, in 27 games played this year he does stuff that really isn’t on the scoresheet. Bunnaman does the dirty work to keep either play going for the Checkers or keep opponents at bay.

Fans need to watch Bunnaman’s game where he does the little things that head coach Geordie Kinnear wants his players to do game in and game out. As Kinnear says, if players keep working at their craft, good things will happen. Bunnaman shows up and does his job to help the Checkers win. While he isn’t scoring goals like Riley Nash, or making huge defensive stops like Lucas Carlsson, Bunnaman does what needs to be done to get points for the Checkers. If Bunnaman plays his game against the Monsters i.e. getting under their skin and just doing the little things, that could go a long way for the Checkers in the series. 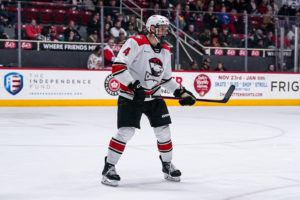 The last player to be featured in the Series Preview is no other than Kamloops, BC native Johnny Ludvig. Ludvig came back from injury in the Bruins series and he made an instant impact right away. In the game recap against the Providence Bruins, Ludvig provided a massive hit during the Checkers’ four-minute penalty kill after a double minor high-sticking penalty. Getting Ludvig back in the lineup on the blue line has paid dividends for the Checkers. In his last five games, Ludvig has one goal and one assist for two points total.

So far in ten games played, Ludvig has accumulated one goal and two assists for three points. As stated before he just came back from an injury where he has to play with a full cage. Although, having him back could give some much-needed physicality to a Checkers team who needed some grit, especially during their losing streak. If Ludvig keeps providing that extra thump for the Checkers, he could give his teammates space to have more high-danger chances on the offensive side. Furthermore, his defensive prowess could provide the goalies better chances to make clean saves to help the team claim points in this series. Fans need to keep an eye on no. 4 this series in Cleveland on the blue line. There can be major impacts coming in the way of possible Checkers wins.

How to catch the Series

Both games will be on AHL.TV with the Thursday game at 7 p.m. Eastern, and the Sunday game at 12:31 p.m. Eastern. Plus, fans can keep up with the games on the Field Pass Hockey app.