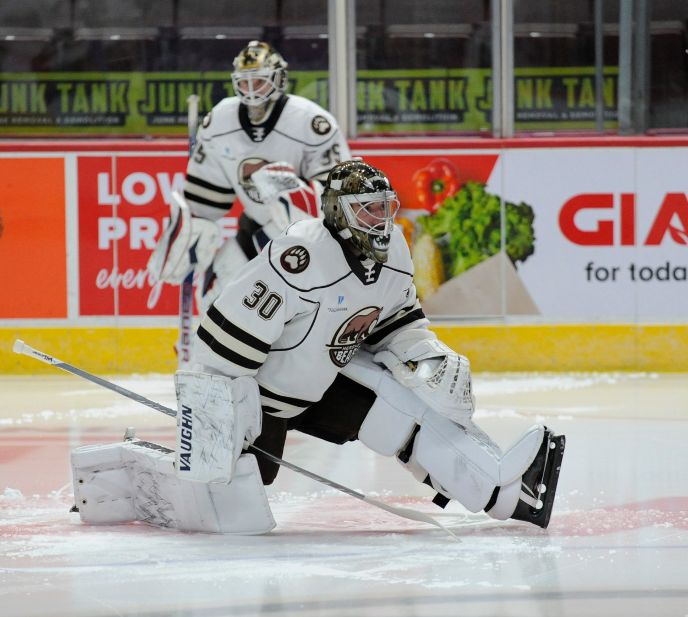 SPRINGFIELD, Mass. – After a fairly tame start between the Hershey Bears and the Springfield Thunderbirds on Thanksgiving Eve, things escalated quickly as a dramatic save by Hershey netminder Hunter Shepard helped turn the tide, and a Mason Morelli breakaway goal was the difference-maker in a 2-1 win for the visiting Bears. The win was only Hershey’s second road win of the season, but it was a total team effort by their group to secure the win. Shepard made 26 saves in the win while Joel Hofer made 23 stops in defeat.

Fast forward to the last three minutes of the second period. The Bears surrendered the first goal with Martin Frk‘s fourth goal of the season on a quick shot from the faceoff circle. With that goal, the forward moved into sole possession of second place on the Thunderbirds with 15 points in as many games. However, only 22 seconds later, the Bears would tie it on Connor McMichael’s first goal in his second game since returning to Hershey. McMichael got the puck on the right side of the net and made a quick move to curl and drag the puck to beat Hofer on the blocker side to even the score at one.

Connor McMichael scores on his second game back with the Bears on this beautiful curl and drag! #HERvsSPR @FieldPassHockey pic.twitter.com/zxzpEqDbwd

In the third period, with the game tied at one, perhaps the defining moments of the game happened, starting with a save of the year candidate from Hunter Shepard. The Thunderbirds dumped the puck in, and it got tied up in Shepard’s skates, where it was won by Mitchell Hoelscher and centered to Greg Printz, who was coming off a three-point game against Lehigh Valley over the weekend. Shepard dove back into the crease and got his glove on the shot, covering it in the crease as an early save of the year candidate for the Bears and perhaps the AHL as a whole.

Hunter Shepard loses the puck but dives back into the crease to make a huge save!! #HERvsSPR pic.twitter.com/jUYsWY504M

Only a few minutes later, the Bears found themselves on the penalty kill, where they were perfect on five opportunities. Morelli scored the eventual winner as Hershey got back to even strength. Morelli got in the way of Frk as he was loading the puck at the top of the left-wing circle and found himself in on a breakaway from his own blue line, and quickly made the move to drop the puck between Hofer’s pads to move the Bears in front.

Bears kill off a penalty and Mason Morelli goes in on the breakaway for the goal! #HERvsSPR pic.twitter.com/nxGDsD54b1

Hershey’s staff will likely be handing out a lot of ice packs for bruises when all is said and done. The Bears lost Henry Rybinski after the first year Hershey forward was hit face first into the dasher boards, and it was only a few minutes later that captain Dylan McIlrath left the game briefly after taking a shot up high. The Bears put on a masterclass in shot blocking across the board, leaving their bodies on the line, a big reason why they were perfect on the penalty kill and walked away with two points.

The win is Hershey’s tenth of the season and moves them into a tie for third place in the Atlantic Division standings and only two back of first place in a highly contested battle between four teams for the top spot.

The Bears play a pair of games on the road with the Hartford Wolf Pack on Friday and Saturday while the Thunderbirds are back in action on Saturday when they host the Wilkes-Barre/Scranton Penguins.