LOVELAND, Colo. – In the constantly shifting — and sometimes collapsing — landscape of minor league hockey, it takes a well-run organization to survive the ups and downs of regional leagues, lateral moves, and bumping up a level.

LOVELAND, Colo. – In the constantly shifting — and sometimes collapsing — landscape of minor league hockey, it takes a well-run organization to survive the ups and downs of regional leagues, lateral moves, and bumping up a level.
Sound familiar?
The Colorado Eagles, founded as a Central Hockey League franchise in 2003, have endured not one but two league-to-league changes in their market’s history. Jumping to the ECHL in 2011 after eight CHL seasons, Colorado’s unilateral ‘AA’ hockey league move eventually yielded seven seasons for the Eagles in the former East Coast Hockey League. Then, during the 2017 offseason, the Colorado Avalanche announced that their new American Hockey League affiliate for the next ten years was going to be just an hour or so north off I-25, as the Loveland-based Eagles made the jump up to the AHL in 2018-19.
Now, a lot of moving parts and varying factors had and have to happen in order for the Eagles to sustain their model of success both on and off the ice. However, the purpose of this article is to focus on an underrated public relations tactic that Colorado has masterfully managed in transitioning through three leagues in a decade and a half’s time. What have the Eagles done to continue their brand from the CHL to ECHL and now the AHL?
They carry over familiar faces from between the boards, behind the bench, in the front office, up in the broadcast booth, and beyond.

MOVING MOUNTAINS: FROM THE CHL TO ECHL

Back in 2011, when the Eagles decided to make the shift to the ECHL from the Central Hockey League, it wasn’t nearly as abrupt a move as, say, heading to the AHL. Both leagues were considered ‘AA’ hockey, so the shift from one to the other was a bit more seamless, especially on the players side of things. Current Colorado assistant coach Aaron Schneekloth, a defenseman at the time, made the transition with the Eagles from league to league. Other standout players like left wingers Adam Chorneyko and Steve Haddon, centerman Riley Nelson, d-man Kyle Peto, and forward Kevin Ulanski carried over from the CHL in 2010-11 to the ECHL in 2011-12.

Defensemen Brad Williamson and Aaron Schneekloth celebrate their President’s Cup win in 2007, the Eagles second and final CHL title before moving to the ECHL in 2011. Photo Credit: Colorado Eagles

BUY A VOWEL: THE JUMP FROM THE E TO THE A

During the 2018 offseason, defenseman Nicolas Meloche and left winger Travis Barron made the jump from the 2017-18 ECHL squad to the 2018-19 AHL team. And, as the Colorado Avalanche announced the Utah Grizzlies as their new ECHL affiliate last June, the opportunity for player carryover was a simple as a shared state border. Guys who had lifted the Kelly Cup in 2018 like Joe Cannata, Nolan De Jong, Jake Marchment, Joey Ratelle, and Teigan Zahn all donned Grizzlies uniforms that very next season. The ease for Colorado Eagles fans to support a former Mountain Division foe in Utah was cross-branding at its finest, and obviously not the first time Colorado had to navigate such waters.

The most recent examples of brand continuity lie in this offseason re-signings of forwards Michael Joly and Julien Nantel. Joly and Nantel continue to carry the mantle between the ECHL days and current AHL standing of the Eagles organization, as Colorado enters year number two in the American Hockey League. Both men were involved in the ECHL Eagles 2018 Kelly Cup victory, while Nantel played a part in both of Colorado’s 2017 & 2018 Kelly Cup wins. 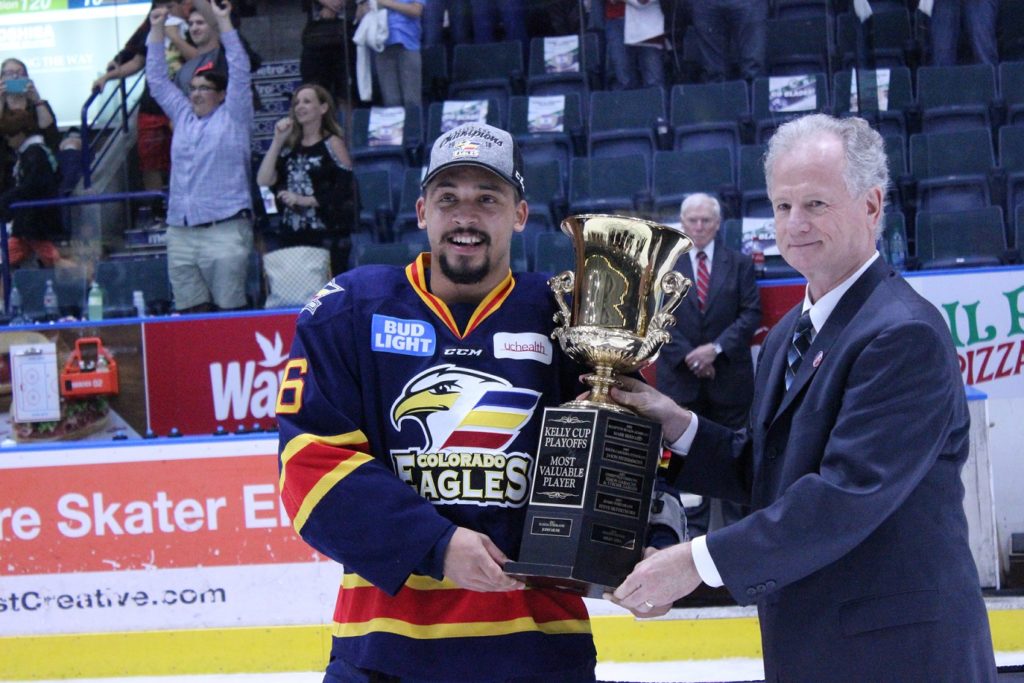 Any Eagles fan worth their ilk knows that former Head Coach and current President/GM Chris Stewart has led the team to four championships (two as coach, two in the front office) and through both transitions between leagues. All but five of Colorado’s sixteen seasons have been coached by Stewart, with stints as bench boss in 2003-2008 and 2010-2016. He now is responsible for the team’s day-to-day operations and business partnerships.
After coaching the first five ECHL seasons for the Eagles, Stewart stepped down and gave the reins to Aaron Schneekloth, who had served as an assistant under Stewart for three seasons after a 12-year playing career with seven seasons in Colorado. “Schneeks” was nothing short of amazing as head coach, leading the Eagles to a 95-28-11 record in two Kelly Cup Championship seasons (Colorado’s last in the ECHL). With such success, it was no surprise that Schneekloth and fellow former Eagles player  Ryan Tobler were hired on by the AHL Eagles as assistants in July 2018. Tobler played six CHL seasons with Colorado from 2004-2010 before serving as Schneekloth’s assistant in 2016-17 and 2017-18.

Another former Eagles player making a big impact at the coaching level is the previously mentioned Steve Haddon. He geared up for eight seasons with the CHL/ECHL Eagles until retiring from on-ice competition in 2013. With his playing days over, Haddon immediately went into coaching, taking the helm of the WSHL’s Colorado Junior Eagles (Tier-II, Junior A) in their inaugural season. After being rechristened the Northern Colorado Eagles in 2018, Haddon stayed with the team and completed his sixth season of coaching in 2018-19. With the club stationed just 21 miles west of Loveland in Greeley, Haddon has undoubtedly helped establish the Eagles’ junior program and further root an ice hockey influence in northern Colorado.

Beyond the players, coaching, and front office, a broadcaster fans immediately recognize and appreciate has also aided the Eagles in their continuity through three pro hockey leagues. Kevin McGlue, Colorado’s play-by-play announcer since 2009, just completed his tenth regular season of calling Eagles games. His constant presence behind the mic for the last two CHL years, all seven ECHL seasons, and first AHL campaign gives fans listening at home and afar yet another thread from the past to carry into the future of Eagles hockey.

Since the Eagles joined the Central Hockey League in 2003, there have been countless former CHL teams that have either folded or relocated (including the collapse of the league itself in 2014). Only six former markets are now occupied by ECHL franchises. During Colorado’s time in the ECHL (2011-2018), six teams shuttered operations and five relocated. Even this offseason, the Manchester Monarchs closed their doors after only four seasons in their ECHL iteration.
Minor league hockey can be a fickle thing, but the Colorado Eagles have managed to stay put and thrive for sixteen years of ‘AA’ and ‘AAA’ hockey. With all the listed factors tying into the fabric of northern Colorado, it’s no wonder that the Eagles’ future looks bright and secure regarding the playing product, the rare coaching changes, and familiar faces both in the front office and in the broadcast booth.
Follow C.C. Hawkley on his new Twitter handle (@SinBinEagles) for all things Colorado Eagles and overall AHL/ECHL league coverage!